Calls for an African Green Revolution, Only Smarter 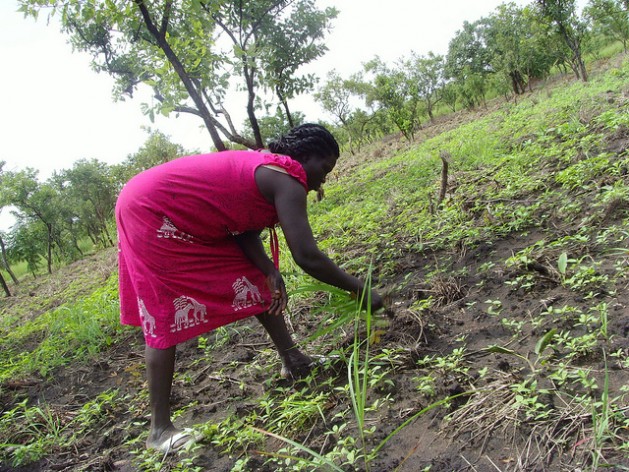 UNITED NATIONS, Jun 7 2012 (IPS) - To deal with looming food crises in the coming decades, Africa needs a Green Revolution on par with what took place in Asia during the 1960s and 1970s, according to experts in Washington.

But such a revolution would need to ensure that the mistakes made in Asia are not repeated in Africa, warned Shenggen Fan, director general of the International Food Policy Research Institute (IFPRI) here, while unveiling a new policy brief released here on Thursday.

As world leaders prepare to gather in Rio de Janeiro in two weeks for a major summit on sustainability, IFPRI cautions that the poor need to be at the centre of the debate.

“What are the implications of a green economy for the poor and hungry?” the new brief asks, focusing particular attention on Africa. “How can the poor benefit from and thrive under a green economy? What role can agriculture play?”

In mid-May, ahead of the Group of Eight (G8) summit near Washington, President Barack Obama announced a major new initiative to combat hunger, pledging to bring 50 million people out of poverty within a decade. But despite have the backing of the world’s richest countries, the new programme has “failed to pay much attention to issues of green economy and sustainability”, Fan said.

Starting in the 1960s, the introduction of new technologies – particularly heavy use of fertilisers and pesticides, as well as the introduction of monocropping – in South Asia resulted in massive strides forward in the short-term ability of the region to feed itself, and was credited with staving off mass starvation in several areas.

However, the longer-term implications have been highly criticised. Significant drawbacks have included severe depletion and poisoning of groundwater and increasingly poor soil quality, resulting in lower crop yields and increased dependence on government and international resources.

“When we move to Africa, we need to take into account the green technologies and new ways of thinking” that have evolved in recent decades, Fan said.

That move needs to take place both quickly and smartly, given an ominous convergence of factors that will place particular stress on food production in Africa.

By 2050 the global population is expected to grow by two billion people, even as incomes and living standards for many continue to improve. Current projections suggest this will mean a massive increase in food requirements: 80 percent more water-intensive meat will be needed, 60 percent more cereals.

Meanwhile, the two minimum requirements for agriculture and food production – water and land – are both becoming increasingly strained.

First, agriculture already accounts for some three-fourths of global freshwater use. “Since other demands for water are expected to increase much faster, the amount available for irrigation will see only a minimal increase,” IFPRI’s researchers note. “By 2050 water scarcity could reduce cereal production potential by more than 10 percent.”

Second, the amount of land under agricultural use around the world has dropped precipitously in recent years. Further, in the two decades between 1986 and 2006, around a quarter of all global land area was affected by degradation of some kind, IFPRI researcher Ephraim Nkonya told journalists this week.

This has an adverse effect on agricultural potential, but it also has a disproportionate impact on poor communities, as some 43 percent of the poor across the globe live on degraded lands. This is especially the case in Africa, Nkonya says, which constituted a full 13 percent of the 1986-2006 degradation statistic just cited.

While degradation and deforestation are traditionally blamed on increasing population density (and the related presence of roads), Nkonya says such a correlation isn’t necessarily correct. Rather, repeated experiences have shown that weak institutions and poor governance are far more often to blame.

This discrepancy highlights a significant lack of understanding, among policymakers as well as the general public, about the costs of prevention versus inaction on land degradation.

According to Nkonya, the economics work out such that preventative measures would be just 10 percent those of inaction – a dollar invested in prevention today would otherwise cost 10 dollars to ameliorate down the road.

IFPRI offers a series of policy recommendations calling for “decisive actions on a number of fronts” to simultaneously address economic development, food production and sustainable resource use, while factoring in the full costs and benefits associated with countries’ natural resources.

Unfortunately, even as leaders gear up for the Rio talks, issues surrounding land use have been notably underemphasised.

According to a pre-Rio special issue of the science journal Nature released on Wednesday, of the three agreements to come out of the original Earth Summit in Rio in 1992, the U.N. Convention to Combat Desertification (UNCCD) is today “the poor relation … Progress towards its goals has been even more elusive than for climate and biodiversity.”

The new U.N. Global Environment Outlook, also released on Wednesday, likewise notes that “combating desertification … has seen little or no progress”, and warns that “deforestation and forest degradation alone will likely cost the global economy more than the losses in the 2008 financial crisis.”

This time around, too, the first draft of the Rio 2012 negotiating text bore little mention of issues of land use.

Several countries, particularly Germany, are currently pushing for the inclusion of a new sustainable goal regarding land, referred to as zero net land degradation. On Jun. 1, the UNCCD released a related policy brief, and Jun. 17, just days before the summit is set to begin, will be marked as the World Day to Combat Desertification.

But as yet there has been no overarching agreement on the issue’s inclusion at Rio.