WASHINGTON, Jun 28 2012 (IPS) - A U.S. government agency is being questioned on why it is dragging its feet on 2010 legislation that would increase transparency in extractive industries around the world, one aim of which would be to cut down on the global trade in “conflict minerals”. 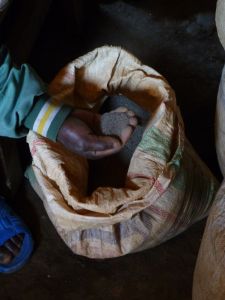 A sack of cassiterite (tin ore) at a trader. Credit: Courtesy of Global Witness

Provisions in the bill would constitute the first major legislation enacted to deal with the issue of natural resources fuelling conflicts, but have run into significant attempts by industry to water them down.

On Friday, 58 members of the U.S. Congress sent a letter to Mary Schapiro, the head of the regulatory Securities and Exchange Commission, urging her to explain how her agency is moving towards operationalising two key provisions of the controversial 2010 bill.

Known as the Dodd-Frank Wall Street Reform and Consumer Protection Act, the far-reaching bill was enacted in response to the 2008 financial crisis, vastly increasing the government’s ability to regulate the finance sector.

In focus are two provisions of that act, Sections 1502 and 1504. The former would require U.S. companies that use tin, gold or several other mined resources to publicly carry out due diligence to ensure that those resources are not fuelling conflict, as has been documented most recently in eastern Congo.

Section 1504, meanwhile, would require public disclosure of all payments made by U.S. companies made to any governments for minerals or oil extraction.

The SEC, which regulates all U.S. publicly traded companies, published draft rules for enacting the two provisions in December 2010, but since then these have languished pending a final vote within the Commission.

“There is no clear reason for the delay,” the 58 members of Congress, both Democrat and Republican, noted in their letter to Schapiro.

“This issue is too serious to allow further delay. Conflict minerals and non-transparent payments for natural resource extraction continue to be a weight on developing nations’ growth and are a risk to investors and the public.”

The letter specifically references the situation in Congo: “Worse, continued delay undermines efforts in (Congo) to make the mining industry more transparent and to diminish the link between minerals and the funding of the brutal violence carried out by warlords.”

The senators are urging Schapiro to schedule an SEC vote on these two provisions by Jul. 1 or to explain the inordinate delay.

According to the SEC’s website, votes on these sections were to have taken place between January and June of this year, a timeframe that had already struck many as unnecessarily lengthy.

While rights and advocacy groups widely lauded the letter, it was only the latest in a stream of attempts to prod the SEC into action.

“NGOs that work closely on the issue have met with the SEC and submitted comments 60 times,” Jana Morgan, with Global Witness, a Washington-based pressure group that previously gained accolades for its work on conflict diamonds, told IPS.

“It’s a question of leadership – Chairman Schapiro has not made this a priority. Is she going to take a stand on these issues, or is her legacy going to be sitting on the sidelines and letting opportunity slip past?”

It’s unclear what exactly is behind the holdup, but in fact the SEC is receiving complaints for its sluggish response to much of the Dodd-Frank provisions, with rulemaking pending of 60 percent of the bill.

Over the past 12 months, the SEC has reportedly finalised just nine new rules for Dodd-Frank, missing 48 related deadlines during that period.

“The argument that the SEC is overwhelmed is a red herring. Lobbying definitely has had a negative effect,” Morgan says. She points to strong stances taken on S 1502 and 1504 by the U.S. Chamber of Commerce and the American Petroleum Institute, a lobbying group, among others.

“The proposed rules on conflict mineral disclosures may affect nearly every manufacturing sector and facet of the supply chain,” the Chamber of Commerce noted in response to a query from IPS. In the past, the Chamber has engaged in legal battles against regulators and has suggested that it may be willing to do so again in this case.

On Wednesday, Global Witness called on major manufacturers, particularly electronics companies, to publicise their positions regarding the Chamber’s related statements. Already, high-profile companies in the sector – including Microsoft, General Electric and Motorola – have publicly rejected the Chamber’s position.

Meanwhile, groups supporting the conflict-minerals provisions have already engaged in legal action. In May, Oxfam America, a relief agency, sued the SEC for violating a legal deadline, which expired in April, on finalising S 1504.

Oxfam is requesting the court to order the SEC to move forward on the issue. A decision on the case is expected by mid-July.

“Oxfam America is simply asking the SEC to follow the law,” Ian Gary, with the organisation’s oil, gas and mining programme, said in a statement on Monday.

“New discoveries of oil and minerals, such as in East Africa, are being announced almost every week and quick implementation of this provision will help ensure that these countries build on a foundation of transparency.”

The U.S. decision is garnering significant international attention, as well, particularly with related legislation pending in the European Union.

“The world is watching what the U.S. does on this,” Global Witness’s Morgan says. “Other countries are waiting to follow suit.”