Jun 18 2012 (IPS) - Argentina’s success in improving the quality of education in primary schools in low-income areas has awakened the interest of other countries in Latin America, which are keen on learning more about the experience and applying it themselves.

The plan, called Policies of Institutional Self-Evaluation for Improving the Quality of Education, was designed by UNICEF experts for 1,600 schools in five provinces in northern Argentina, the poorest part of the country. 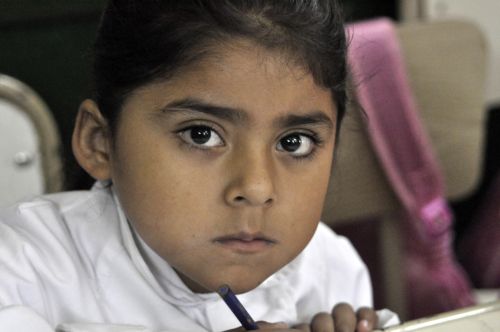 A student at the Francisco Aguirre school in Tucumán, which has taken part in the educational improvement programme. Credit: Courtesy of UNICEF

The programme was implemented using the Self-Evaluation of Educational Quality Instrument (IACE), by means of which school principals, teachers and parents assess a school’s performance and propose steps to be taken to improve quality.

“The culture of evaluation we have in Argentina and in the region in general is deficient and overly focused on what things look like from outside, with a focus on oversight. This gives us a more democratic and participative approach,” Elena Duro, a UNICEF expert on education in Argentina, told IPS.

Duro, who designed the IACE along with Olga Nirenberg, has been working since 2006 to decipher the aspects by which the different actors involved in the educational process define educational quality.

Based on their research, a primer was drawn up and underwent successive adjustments, to adapt the initiative to different contexts, including rural and indigenous populations.

The IACE provides teachers with a survey about the questions of school dropout, overage students, repetition, attendance, understanding the home life of students and their families, and other questions.

There is also a self-assessment form for teachers and a survey for parents about the school’s performance, the principal’s style – authoritarian or democratic -, whether the school respects the community, and other aspects.

Using the information gathered, an Action Plan for Improving Quality of Education is being drafted, with target dates for compliance.

With the backing of the provincial education ministries, the programme was carried out in Jujuy, Salta and Tucumán in northwestern Argentina and Chaco and Misiones in the northeast, reaching a total of 300,000 students and 19,000 teachers in 1,600 schools.

Duro said the proposal designed by Argentina has awakened a great deal of interest in eight other countries in the region, which asked that a meeting be held in Buenos Aires to enable them to learn about the experience. The meeting will be held in August.

“They want to talk with the people involved, learn about the tools used, and see what results have been achieved in practice,” she said. “Each country will certainly develop its own formula afterwards. The important thing is to promote a culture of self-evaluation.”

In Argentina, the programme was put into effect in 2008, and since then failure rates have clearly dropped in primary schools, family participation has increased, communication and learning have improved, attendance has gone up, and absenteeism among teachers has come down.

Isabel Valle is the principal at school number 4530 Teniente Benjamín Matienzo, in the northern province of Salta, one of the institutions where the self-evaluation system has been used.

In her rural school, which has 133 students, “the most urgent problem that we detected was in oral and written expression. The children were having trouble communicating in a comprehensible manner, and used to just stay quiet,” she told IPS.

To improve their communication skills, which were standing in the way of their academic achievement, the school held sessions to discuss and reflect on the challenges faced in the rural environment. “Our view was that these children should do as well as any others,” Valle said, referring to the need to raise expectations in schools in poor rural areas.

The school requested technical assistance from government academic institutions like the National Institute of Agricultural Technology, as well as training for teachers, and held workshops on hydroponics – a method of growing plants using mineral nutrient solutions instead of soil – and on raising silkworms.

“In the workshops, the children constantly interact with others, their curiosity is awakened, they raise doubts, and they have to write reports – all of which opens up the gates of communication,” the principal said.

Based on that experience, the students participated in local fairs where they gave oral presentations on hydroponics and silkworm-growing, and showed their experiments to the local community.

Duro said the experience has not been met with resistance. On the contrary, she added, it has been warmly welcomed by schools, as an instrument that has enabled them to work through obstacles and improve. It has even had the support of the teachers’ unions, she stated.

But she also said the schools and local communities are generally better at identifying their problems than coming up with solutions.

“Eighty percent of the schools find solutions for the main problems, but some are more close-minded, and there is also a problem with respect to goal-oriented planning,” she said.

To address that issue, the experts proposed the inclusion of a planning module, which serves as a guide. “The instrument is a living tool, which adjusts and adapts to needs,” Duro said.

Another principal, Leonardo Ledesma, told IPS that in his school they noted “a marked problem of loss of values, lack of respect for others, and aggression.”

“For that reason, we came up with different strategies for improving the situation, and we have also worked a lot with reading and writing,” said Ledesma, who is principal of school number 179 in Machagai in the province of Chaco, which has a student body of 812.

Although they had already been carrying out periodic evaluations, it went better with the IACE, he said.

The school began to produce a newspaper with the participation of the students, which is now distributed among them, so they can read news about their community, he said.