UNITED NATIONS, Jun 27 2012 (IPS) - Radhika Coomaraswamy has been the United Nations Special Representative for Children and Armed Conflict since April 2006. 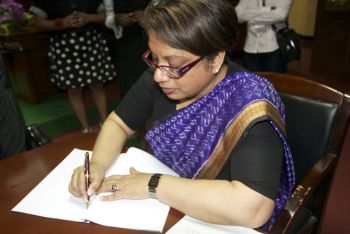 Radhika Coomaraswamy, UNMISS, South Sudan Ministry of Defence and UNICEF sign action plan for the release of children from the SPLA and allied militias. Credit: Children and Armed Conflict

She has visited Uganda, Central African Republic, Sri Lanka, Nepal, Philippines and Iraq among other countries to see first-hand the situation of children there.

Q: Last March, you visited South Sudan. The Sudan People’s Liberation Army (SPLA) signed a U.N. agreement to release the children in their ranks. This is one of the objectives of your office: to establish a dialogue with the different parties. How effective has this strategy been in the past and how effective is it expected to be in South Sudan?

A: We have been successful, we have had about 17 action plans signed and in 2011 several thousand children were released in the Central African Republic, Chad, Colombia, the Democratic Republic of the Congo, Myanmar, South Sudan and Sudan, including through United Nations demobilisation efforts.

This is a Security Council-mandated process, so what happens basically is the council asks the secretary-general to list parties that recruit and use children as child soldiers as one of its categories. The SPLA was listed as such a party.

To get off the list you have to enter into an action plan… that verifies that you do not have children anymore, so basically that’s what we did. We signed the action plan with them to release the children.

Q: In the latest U.N. report on children and armed conflict, the Syrian government forces are listed as a new party that kills and maims children and also attacks schools and hospitals. What would be the best way to approach the issue?

A: What’s very important in Syria now is to first stop the fighting, and to do that we have to try and quickly revive the political process and stop the confrontation between the two parties. After that one can think of peacekeeping or anything else that the international community decides.

Q: How much has been achieved so far?

The technical team (that was sent to Syria) could meet with the refugees, with people across the border, so they spoke to them and they met children who have been victims and take out their attestation from them without an adult’s presence. They assessed the credibility of those children and in some cases of torture, the physical marks were still on the children. They got a very good sense of what is taking place.

Q: In this same report, Nepal and Sri Lanka are no longer on the “list of shame”. What should be the next step in the process towards peace and reconciliation?

A: In Sri Lanka, for example, there were two parties listed, the Liberation Tigers of Tamil Eelam (LTTE) and the Tamil Makkal Viduthalai Pulikal (TMVP). With regard to the Liberation Tigers of Tamil Eelam, they were all killed at the end of the war, there was no leadership so there was no question of listing them. The TMVP had entered into an action plan with the U.N. and finally this year a team went down and confirmed that all the children had been released and therefore these parties were delisted.

Now the humanitarian programmes, of course, will continue but the purpose of listing of course is no longer there.