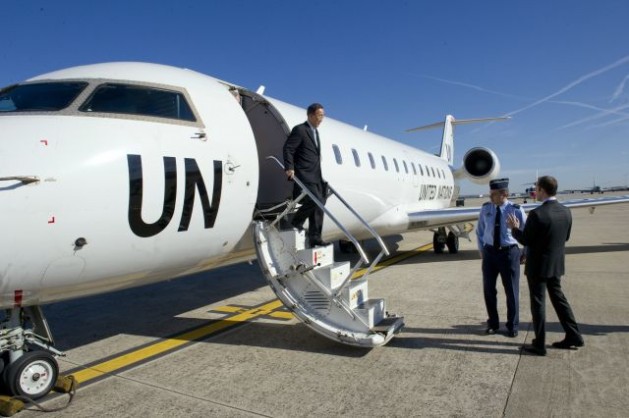 UNITED NATIONS, Jun 2 2012 (IPS) - As the international community readies for a global mega-conference on sustainable development in Brazil mid-June, the United Nations is determined to practice what it preaches to the outside world: improve resource efficiency and drastically reduce its own greenhouse gas emissions.

With over 50,000-60,000 participants worldwide scheduled to arrive in Rio de Janeiro, the U.N. staff delegation to the U.N. Conference on Sustainable Development, also known as Rio+20, has been minimised to approximately 1,400 – primarily for economic and environmental reasons.

But even so, the 1,400 participants, according to U.N. statistics, will generate an estimated 3,600 tonnes of carbon emissions, largely from air travel.

And so the president of the 193-member General Assembly, Ambassador Nassir Abdulaziz Al-Nasser of Qatar, has offered his strong support for a Carbon Emissions Offsetting Initiative (CEOI).

The aim: to offset the carbon footprint from U.N. staff travelling to Brazil and participating in Rio+20 summit.

A carbon footprint has been defined as the total amount of greenhouse gases produced to support human activities, and is traditionally expressed in equivalent tonnes of carbon dioxide (CO2).

The CEOI, the brainchild of the Special Unit for South-South Cooperation in the U.N. Development Programme (UNDP), is aimed at a “climate neutral U.N. participation at Rio+20”.

“I look forward to a resounding success of this U.N. system-wide Carbon Emissions Offsetting Initiative at Rio+20,” Ambassador Al-Nasser said.

In a letter to Yiping Zhou, head of the Special Unit for South-South Cooperation, Dr. Mutlaq Al-Qahtani, ambassador and chef de cabinet, said “the President of the General Assembly commends your team’s creativity and your leadership in responding to our collective commitment to ‘walking the talk’ on climate change”.

The CEOI also has the blessings of Secretary-General Ban Ki-moon, and Under-Secretary-General Sha Zukang, head of the Department of Economic and Social Affairs and secretary-general of Rio+20.

Both officials will join Ambassador Al-Nasser during the launch of the initiative on Jun. 21 as part of a side event at Rio+20 in Brazil.

The Special Unit has been mandated to facilitate the initiative by building partnerships and leveraging the services of its flagship exchange platform: South-South Global Assets and Technology Exchange (SS-GATE) to offset the estimated 3,600 tonnes of CO2 emissions from the U.N.’s participation in Rio+20.

According to the Special Unit, SS-GATE will offset the emissions with Gold Standard Certified Emissions Reductions (CERs) generated from Clean Development Mechanism (CDM) projects with a priority for projects in the 48 Least Developed Countries (LDCs).

The CDM allows emissions-reduction projects in developing countries to earn CER credits, each equivalent to one tonne of CO2.

CERs can be traded and sold, and used by industrial countries to meet a part of their targets under the Kyoto Protocol on climate change.

The Special Unit says that with more than 3,600 registered projects in 72 developing countries, the CDM has proven to be a powerful mechanism to deliver finance for emissions-reduction projects and contribute to sustainable development.

The Special Unit also points out that SS-GATE has recently offset over 3,500 tonnes CO2 emissions from two major U.N. events: the U.N. Pavilion at the 2010 World Expo in Shanghai, China and the 2011 Climate Change Conference in Durban, South Africa.

The Special Unit’s key partners include the the Department of Economic and Social Affairs (DESA) and its Rio+20 Secretariat, the U.N. Framework Convention on Climate Change (UNCCC) and the UNDP’s Environment and Energy Group and its Bureau for Development Policy.

Meanwhile, in a report released in April, the U.N. Environment Programme (UNEP) points out that over 50 percent of the U.N.’s greenhouse gas emissions are from air travel (4.2 tonnes per capita) making this the biggest challenge for the organisation in reducing its overall emissions.

In its third annual report titled “Moving Towards a Climate Neutral U.N.,” the report details a wide range of actions taken across the U.N. system to improve resource efficiency and cut the organisation’s emissions.

“These include encouraging train journeys over air travel, providing bicycles for staff members, installing efficient lighting systems in U.N. offices or using e-conferencing instead of traveling to meetings,” it says.

According to the report, the U.N.’s 2010 emissions for 54 entities in hundreds of locations (and over 200,000 employees) show that the U.N.’s total greenhouse gas emissions were 1.8 million tonnes of CO2 equivalent.

“This is the same amount of carbon sequestered annually by 383,795 acres of pine or fir forests, an area the size of the Faroe Islands.”

In the foreword to the report, Ban said “the United Nations system is strongly committed to leading by example and ensuring that our operations are continuously monitored and improved – not just in terms of what we deliver, but also how we deliver.”

“We are also looking to this year’s U.N. Conference on Sustainable Development – Rio+20 – to generate ideas that will energize sustainability efforts worldwide,” he added.