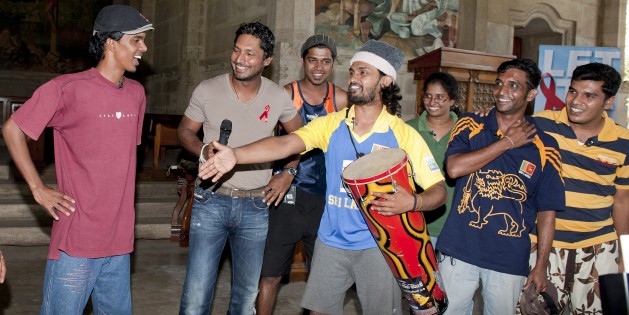 COLOMBO, Jul 16 2012 (IPS) - Sri Lanka has long enjoyed a low 0.1 percent HIV prevalence but, as the number of fresh infections rises steadily, experts are calling for a change in the country’s archaic laws that make sex work illegal and criminalises homosexual activity.

David Bridger, country coordinator for UNAIDS in Sri Lanka and the Maldives, is among those who believe that stigma and discrimination combined with insensitive laws are fueling a slow but steady increase in the number new HIV infections.

“We have one part of government trying to reach people at high risk with targeted prevention efforts and another part of the government arresting people and driving them away from those very services,” Bridger tells IPS.

Bridger said the contradicting approach “does not make sense from a public health point of view and makes prevention more costly and less effective.”

“It is a culturally taboo subject (sexual issues) to speak about and we have serious difficulties in a situation where high-risk behaviour is widespread,” he said.

Sarah Soysa from Y-Peer, an international youth network promoted by the United Nations Population Fund (UNFPA), notes: “Boys  simply refuse to wear condoms during sexual intercourse and are more concerned about their partners taking ‘the morning after pill’ to avoid pregnancies.”

“In the past two years new infections are seen to be rising among those below 24 years, and 50 percent of them are MSMs,” says NSACP director Nimal Edirisinghe.

But, the biggest hurdle for groups working in HIV/AIDS prevention is the laws against homosexuality and prostitution framed during British colonial times, criminalising ‘carnal intercourse against the order of nature’ and ‘gross indecency’ respectively.

Last month ‘Equal Ground’, a rights group that campaigns for equal rights for people with different sexual orientations and gender identities, petitioned the government to repeal sections 365 and 365A of the penal code, relevant to homosexuality and prostitution and dating back to 1883.

“The criminalisation of same sex relationships and the resultant cultural and social stigmas attached to homosexuality,” said the petition, leads to “all forms of discrimination, marginalisation and violence, resulting in mental health issues, low self-esteem and internalised homophobia.”

“Consensual sex between adults should not be policed by the state nor should it be grounds for criminalisation,” the petition said.

“We work a lot with female sex workers and have many problems with the police and law enforcement authorities,” says H. A. Lakshman, executive director of Community Strength Development Foundation (CSDF), an NGO.

Lakshman, who has been working for the past 19 years with CSWs and employs some of them, said: “We try to provide sex workers with alternate livelihood avenues in the hope that they would eventually move away from sex work.”

For CSDF the biggest challenge is that 20 percent of CSWs who are also injectible drug users pay for their fixes – about Sri Lankan rupees 2,000 (15 dollars) a day – from their earnings.

“They are careless about the use of condoms,” said Lakshman whose organisation is currently in touch with 6,000 sex workers and distributes 125,000 condoms a month as partner to GFATM and UNFPA.

“Over the years we have distributed millions of condoms,” he said. The CSDF maintains a drop-in centre at its Colombo office where the women can avail of counselling, help, and even stay overnight.

“Our work has seen a reduction in drug use, pregnancies and abortions while condom use has increased,” he said. “We now also find fewer infections among this group.”

Sarvodaya’s Yakandawala says that lately CSWs have moved from working in brothels to visiting homes and hotels, contacting clients over mobile phones.

Bridger at UNAIDS says there is an urgent need for policy debate and discussion on reproductive rights and sexual health. “Bad laws should not be allowed to stand in the way of effective HIV responses,” he said.