Going It Alone After the Rio Circus 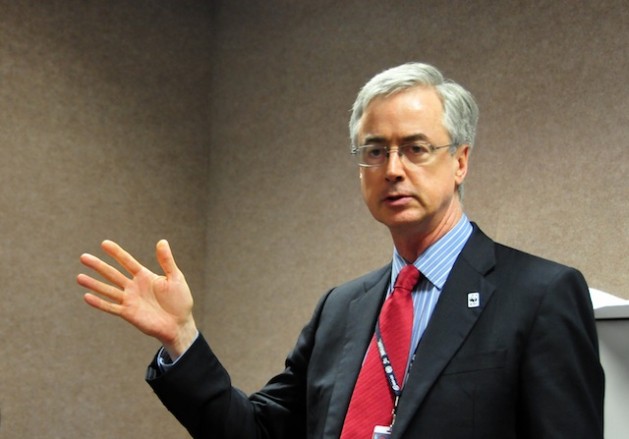 WWF head James Leape says “we are already living as if we had more than one planet.” Credit: Amantha Perera/IPS.

Jul 1 2012 (IPS) - The works starts now, UN Secretary-General Ban Ki-Moon said at the conclusion of the summit on sustainable development in Rio last week. This was about the only UN statement that civil society groups seem to agree with. It is on the precise task at hand that they differ.

For many civic groups who were at Rio meeting government officials, heads of companies and other activists, the summit was a watershed in negotiating at multilateral platforms. They left Rio with the undisguised feeling that the wait for governments to act together to take action on the planet’s well-being was over, and it was now time to seek action through other avenues.

“The multilateral process did not deliver,” James Leape, executive director of the World Wildlife Fund (WWF) said as the mega conference of more than 45,000 participants, delegates from 188 countries including over 100 heads of state drew to a close.

Without any clear targets and deadlines, the final document adopted at Rio was a failure, Leape said. “This was a conference that should have gone to the very heart of sustainable development,” the WWF head said adding, “(instead the final document), embodies very little that encourages governments to act.”

The final document hailed as “a firm foundation for social, economic and environmental well-being” by the UN Secretary-General, was described by the WWF official as similar to the summing-up notes  at a seminar, not a final declaration of world leaders that was expected to set the tone for future action.

The failure was blamed on the fractious nature of the negotiations and the large number of governments talking to each other to reach a consensus. “Governments did not find a way to step up,” Leape said.

Kumi Naidoo, executive director of Greenpeace, said sustainable development did not appear to be on the top of the list of priorities for many of the governments at Rio. When issues like politics, diplomacy and economics intervened, no one wanted push on with difficult decisions, he said.

Naidoo who held one on one discussions with seven heads of state and over 20 environment ministers, said all agreed privately on the assessment by the likes of Greenpeace and WWF, but none would say that in public or act on their stated views decisively. “The inconvenience of realpolitik intervened to prevent them from doing the right thing,” he said.

As the multilateral platform failed, activists like Leape say the best hope now is to deal with individual governments, companies or small groups. He takes the example of Indonesia that under President Susilo Bambang Yudhoyono set a moratorium in place on clearing forests last year, and took the lead on the Coral Triangle Initiative under which Indonesia, Malaysia, the Philippines, Timor Leste and Papua New Guinea have agreed to protect their marine environment.

In 2010, Indonesia entered into an agreement with Norway under which the latter was to provide funding to the tune of a billion dollars to support efforts to stop deforestation. In July last year the Indonesian government announced at an international land tenure conference that it had set in place a two-year freeze on issuing new licences to clear forests.

Executive director of the UN Environment Programme Achim Muir has described Indonesia as a country outside the arithmetic of impasse in negotiations.

“The President of Indonesia is clearly moving on his own, on forest conservation in his country,” Leape said. He held up other instances of countries that had acted unilaterally – Mozambique that has adopted a green economy road map, and Mexico with its new climate change policy.

Another line of action civil society groups are pushing is to approach private companies to take action. These include large companies who deal in palm oil, soya or timber, some of whom Leape said were evaluating the sustainability of their businesses.

“If companies move they can inspire others, and open up the political space for governments to do their job,” Leape said.

UN officials acknowledge the increasing importance of the private sector in fostering sustainable  development and facing up to the challenges of climate change. “Private sector is the critical ingredient on sustainability and eradicating poverty,” Kanayo F Nwanze, head of the International Fund for Agriculture Development said.

Greenpeace’s Naidoo says civic groups and individuals should consider more drastic action if governments remain indifferent. “Peaceful civil disobedience has to be a key part of our efforts to get our governments to act with urgency.”

WWF’s Leape said that for measures to take serious effect, global action is needed. “The hope is that if more and more governments are just moving (on their own), it will be easier for them to come together.”