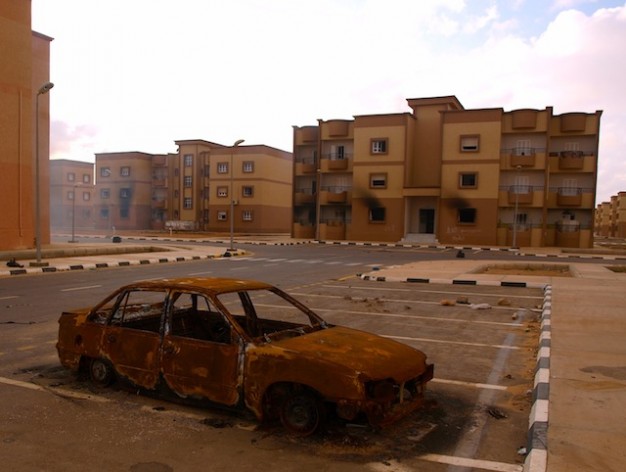 Minority neighbourhoods have been targeted by groups who rebelled against Gaddafi. Credit: Karlos Zurutuza/IPS.

Hawary showed IPS testimonies from families whose loved ones have been beaten to death in the custody of the many militias that continue to control vast swathes of Libya.

“At least 20 people have been beaten to death in militia custody since the revolution, and this is a conservative figure. The real figure is probably far higher,” says Hawary, pointing to photos of bloodied bodies accompanying the testimonies.

Hawary is no fan of the Gaddafi regime. The former Salafist and political oponent of Gaddafi was imprisoned numerous times as a poitical dissident by Gaddafi’s secret police.

Hawary emerged from his periods of incarceration beaten and bloodied, but not broken. Far worse happened to his Islamist friends under the Gaddafi regime which was fiercely opposed to Islamic fundamentalism.

Hawary eventually escaped to Egypt where he remained until Libya’s February 17 revolution in 2011 made it safe for him and other Islamists to return.

Revenge attacks, killings and abductions against former Gaddafi supporters and against black men, who the rebels perceive as having worked as mercenaries for Gaddafi during the war, continue well after the “liberation” of the country.

Several months ago Muhammad Dossah, 28, was abducted by armed militia men at a checkpoint in the northern city Misrata as he was driving his employer Forrestor Oil Company’s car from the city Ras al Amoud to capital Tripoli.

“I don’t know if he is dead or alive. We haven’t heard from him since he disappeared from the militia checkpoint and the police investigating his disappearance say the trail has gone cold,” his brother Hussam Dossah, 25, tells IPS.

The police managed to trace the car through several cities down the eastern side of Libya but there the trail ended. There has been no sighting of Muhammad since then, and his family have no idea what has happened to him.

“He could have been abducted because he is black or because the gunmen wanted the car he was driving. We are Libyan but my father is from Chad,” says Hussam.

Hussam’s story is one of many of abductions, random killings, torture and robbery as militia men continue to take the law into their hands.

Despite the interim National Transitional Council’s (NTC) pledge to bring the more than 6,000 detainees currently in detention to trial or to release them, only some have been freed while the atrocities committed by pro-revolutionary rebels have been overlooked.

Armed militias controlling the streets and enforcing their version of law and order is a problem even in the major cities where the NTC has supposedly retaken control.

Gunfire punctuates the night regularly in Tripoli, and sometimes the day. “All the young men here have guns,” former rebel fighter Suheil al Lagi tells IPS. “They are accustomed to sorting out political differences and petty squabbles this way, or they rob people using weapons. The high unemployment and financial hardship is aggravating the situation.”

While security is an issue in Tripoli, the situation in the provinces is worse. Unshaven, ragtag militia men dressed in mismatching military fatigues often extort money from people travelling through their checkpoints, particularly if they are foreign or black.

At a Misrata checkpoint that this IPS correspondent passed, a bearded militia man decided that foreigners would have to undergo Aids tests before they could have their travel documents returned. Only intervention by others prevented this.

At a number of checkpoints in the Tobruk area, migrant Egyptian labourers were forced to pay bribes of up to 30 dollars each by militiamen before their passports were returned.

“We are aware of the problems facing our country and are trying to resolve the issues,” says Hassan Issa, member of the NTC from Ajdabia city. “It is not easy for us to bring all the groups under control at this point in time,” NTC member Abdel Karim Subeihi tells IPS.

“This is not the new Libya we fought for and we may have to take up arms again if the corruption and greed continue. This time against the new government,” warns al Lagi.