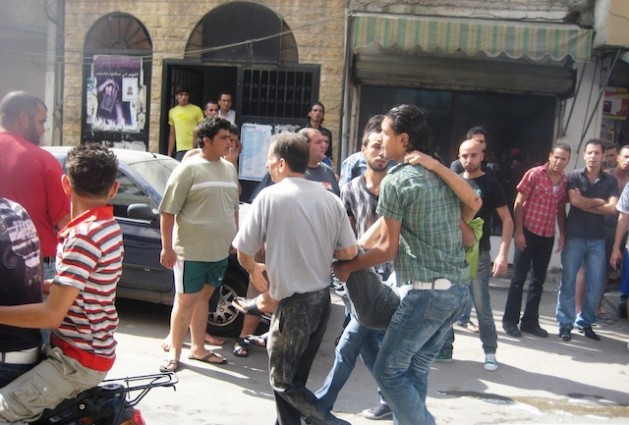 Bystanders carry a victim of a shoot-out in a Palestinian camp in Saida, Lebanon. Credit: Mona Alami/IPS

BEIRUT, Jul 30 2012 (IPS) - Every day Lebanon is being plunged further into a state of general insecurity, as chaos from the war in Syria seeps across the border.

Repeated kidnappings, multiple Syrian incursions resulting in the death of Lebanese citizens, and the widespread use of weapons are just some of the indicators pointing to the slow meltdown of the country’s public institutions.

Following the release of three officers and eight soldiers linked to the deaths of Sunni Sheikh Ahmed Abdul Wahed and his companion – who were shot and killed at a military checkpoint in Kweikhat – gunmen stormed the streets of the northern Akkar region in protest.

The gunmen’s deployment was accompanied by the erection of multiple roadblocks and heavy gunfire, in an obvious show of militant force.

“The security situation is definitely spinning out of control due to the government’s disagreement on a unified security approach. Public institutions and the state are losing their credibility,” a high security officer, clearly discontent with the current condition of the country, admitted to IPS.

The repeated infiltration of Syrian security forces into Lebanese territory – whose diverse population is split between supporters of the opposition Free Syrian Army and communities loyal to the Alawite regime of President Bashar al-Assad – without any condemnation from the Lebanese government, has gradually jeopardised the sovereignty of the state.

Syrian troops have also carried out a number of cross-border raids into Lebanon since the outbreak of the revolt against Assad’s regime in March 2011, sparking fears of a spillover of the conflict.

In the northern region of Wadi Khaled, the most recent incidents involved Syrian security forces kidnapping a member of Lebanese customs and two general security members in the Buqaiaa village.

Masharii al-Qaa (the Qaa Projects) consists of Ersal, a Sunni village, and Qaa, which is predominately Christian. Ersal supports Syrian opposition fighters, whom Qaa residents view with great suspicion. As a result the area has become both a hub for Syrian refugees and a town under fire from Syrian government forces.

This month, three people were killed and another seven injured when Syrian troops fired shells and rocket propelled grenades into Wadi Khaled during clashes between gunmen on the Lebanese side of the border.

“We (don’t understand) why the state is so hesitant to send military troops to the borders. It is not normal that a nation refuses to protect its own territory,” Rateb Ali, a local resident, told IPS.

Others sources in the area admit they have lost faith in Lebanon’s institutions, including the police, army, judiciary and government.

The political vacuum in the north has led local residents to divert their trust to local political figures and charity organisations. “No one wants the Syrian crisis to spill over into Lebanon. They want to avoid the emergence of radical movements, which could easily exploit the state’s absence in the region,” sociologist Talal Atrissi, referring to the various Salafist groups that have established themselves in north Lebanon, told IPS.

Mistrust in the government has been exacerbated by other unresolved security incidents, including the unsolved assassination attempt of MP Boutros Harb, a member of the ‘March14’ anti-Syrian and Iranian coalition.

Local residents aborted the attempt, wrangling with three suspects that were installing an explosive device in Harb’s residence before they managed to flee the scene.

“We have clear leads in that particular attempt, which we cannot share for political reasons. This is exactly why we need to be given the political means to fight back, which will only happen if there is a clear consensus among all government figures. If not, the situation will spin out of control, and it will be too late to fix things,” the security source warned.

Many fear that Lebanon is slowly turning into a failed state, which is usually defined by several key indicators including: loss of control of its geographical territory and the use of physical force within it; implosion of the structures of power and authority; and the internal collapse of law and order. The current political situation is pushing Lebanon inexorably to face all three.

“Lebanon is a soft state. There was an international decision to build the country in a way that the state will always have limited power in order for different communities to prevail,” Dr. Hillal Khashan, political science professor at the American University of Beirut, told IPS.

Since its independence in 1943, Lebanon has been a democracy, home to 18 religious communities.

“Lebanon’s system was not designed to work in the first place. It (experiences) phases of functionality and breakdown, without totally collapsing – a situation that we are now facing,” Dr. Karim Makdessi, associate professor at the Issam Fares Institute, a local think tank, told IPS, adding that public institutions are still operating while admitting that their credibility has been tarnished.

Both political scientists agree that when the state weakens and the power of public institutions diminishes, religious sects strengthen.

“Chaos is a way of life in Lebanon. People are used to it,” stressed professor Khashan. “I still believe that we are far from being a failed state, like Afghanistan. In spite of worrying indicators, I do not think the country will reach a state of total collapse.”