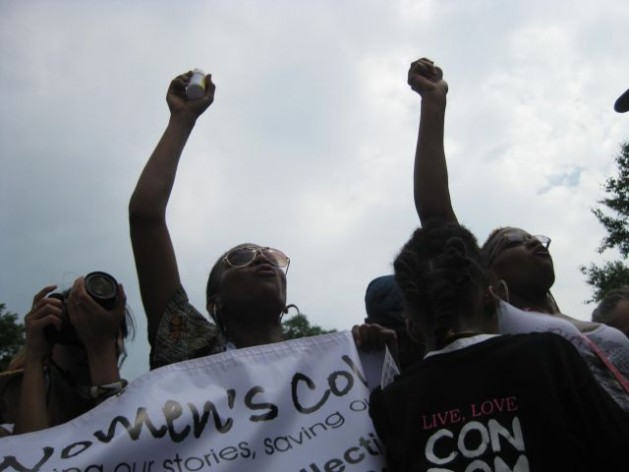 Protesters at the "We Can End AIDS Rally" Hold Up Pill Bottles. Credit: Amanda Wilson/IPS

WASHINGTON, Jul 26 2012 (IPS) - As the nineteenth International AIDS Conference continued in Washington Tuesday, thousands of protesters marched on the White House with a set of demands to end the epidemic.

At the forefront were calls for an end to free trade deals that protesters argue make vital AIDS medicines unaffordable.

The march comprised a coalition of AIDS advocacy and activist groups organised under the mantra “We Can End AIDS”, and ended with a dramatic display when activists gathered symbols of the fight against AIDS – pill bottles and money – tied them with red ribbons, and threw them in front of the White House.

A growing movement within the international advocacy community and those living with HIV/AIDS argue that free trade deals such as the Trans Pacific Partnership (TPP) – a deal the Barack Obama administration has been negotiating with 10 Pacific nations over the past three years –contain excessively stringent protections for pharmaceutical patents on AIDS drugs.

Lorena Di Giano of the Argentinian Network of Women living with HIV spoke at the rally, saying such free trade agreements “would make access to affordable drugs even more difficult”.

Medicine works, but who owns it?

Anti-retroviral (ARV) medicines are known to reduce the transmission of HIV, yet only one out of every two HIV-positive people are on ARVs worldwide. The number is lower for children, and still lower for people in the developing world. But, protesters say, patent protections do not help get more drugs to more patients, a step they say could dramatically halt the epidemic.

They say patents on drugs imported to developing or middle-income countries could block generic manufacturing, resulting in monopolies and higher prices for vital medications.

This trend, advocates say, will exclude and marginalise HIV-positive patients who do not fit within a narrow market of elite or middle-class consumers in middle-income countries who are increasingly targeted for drug sales.

That could mean bad news for patients in fast-growing, middle-income countries such as India and Brazil, where pharmaceutical companies have launched lawsuits against governments in order to enforce patents and block other manufacturers from producing their drugs.

Protesters say the situation is clear: pharmaceutical companies are suing governments for rights to exercise exclusive IP rights on effective new AIDS drugs, making clinical trials data secret, even as they target expensive new drugs to elites and a growing middle class while leaving the marginalised to fend for themselves, or even die.

Currently, certain free trade deals have some flexibility for countries that prefer not to enforce patents on pharmaceuticals. Under the World Bank’s Agreement on Trade-Related Aspects of Intellectual Property Rights (TRIPS), those exceptions expire in 2016. Protesters are arguing for their extension.

Brook Baker, a policy analyst and advocate on IP and access to medications with the U.S.-based AIDS advocacy organisation Health GAP, spoke at a panel session of the International AIDS Conference on Tuesday. He said a dramatic fall in prices for some drugs had lulled people into a false sense of security.

“We face a future in which IP protection in the form of data monopolies and patent monopolies stand in our way,” Baker said. “All new drugs are being created under much stricter IP regimes, and they can be two to three or even 10 times more expensive (than generics).”

Baker urged governments to accept recommendations related to IP in a July report issued by the Global Commission on HIV and The Law, an independent high-level legal commission made up of former heads of state and leading legal, human rights and HIV experts.

In its annual report, the commission this year recommended a moratorium on TRIPS patent enforcement on pharmaceutical products. “The HIV epidemic has exposed the serious problems of applying TRIPS to medicines and other pharmaceutical products,” the report notes. “This has implications well beyond HIV, for example, for non-communicable diseases which affect millions in high-, middle- and low-income countries.”

Baker said the need to address the link between patent law, pricing, and access was especially urgent in middle-income countries such as China, India, Brazil, and South Africa, which have 25 percent, or eight million, of all HIV-positive people.

“They (pharmaceutical companies) are interested in selling to the elites and a growing middle class,” Baker said. “If you get a right to exclude competition and you price your medications for the elite,” people are going to be marginalised, he said.

Tahir Amin, an international IP scholar, emphasised that, through a process called “evergreening”, many new patents on drugs are simply patents on slight changes in compounds being passed off as brand new drugs. “It shocks me to think that this is innovation,” he said.

Sarah Zaidi of the International Treatment Preparedness Coalition (ITPC), based in Thailand, pointed out that the number of free trade agreements had increased from eight in 2001 to 72 in 2012. She said strong IP clauses show the strength of the pharmaceutical patent holders.

“It’s really criminal when you know the evidence around treatment and prevention and the one thing that is keeping you from accessing these drugs are patents,” Zaidi told IPS. “It’s a tragedy.”