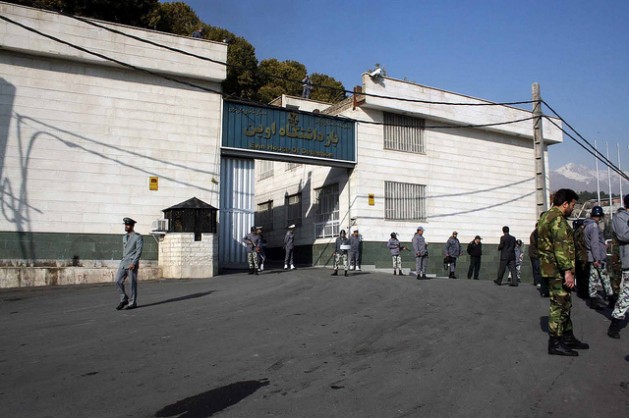 Iran's notorious Evin Prison outside Tehran holds many of the country's political detainees. Credit: Sabzphoto/CC by 2.0

WASHINGTON, Jul 11 2012 (IPS) - While Iran’s human rights record has “never been satisfactory”, since the 1979 Islamic Revolution the situation has deteriorated daily, according to Iranian Nobel Peace Laureate Shirin Ebadi.

A report on the issue was published in “tribute” to her, Iran’s “Green Movement” and other Iran human rights advocates this week by the PeaceJam Foundation, a U.S. advocacy group with 13 Nobel Peace Laureates on its board, including Ebadi.

Ebadi was Iran’s first female judge and became a lawyer known for taking on politically sensitive cases after she was stripped of her judgeship following the revolution. Her private law office was raided and shut down by Iranian police in 2008.

“They thought I would cease my advocacy efforts and succumb to the pressures they place upon me, but I was not going to stay silent when our youth (are) put into prison,” noted Ebadi in an interview transcript shared first with IPS by PeaceJam.

Ebadi has not returned to her home in Iran since June 2009 when the election unrest broke out.

PeaceJam’s 39-page report includes a compilation of cases of politically motivated arrests and human rights abuses previously reported by organisations such as Amnesty International and the Office of the United Nations High Commissioner for Human Rights (OHCHR), as well as interviews with individuals associated with Iranian rights movements such as Iranian-Canadian journalist, Maziar Bahari.

Bahari, a Newsweek reporter who authored a book about his ordeal, says he was subjected to torture during his six-month imprisonment in Iran’s notorious Evin Prison following the Islamic Republic’s hotly contested June 2009 presidential election.

The report stresses that a “systematic crackdown” on lawyers considered threatening to the ruling elite since the 2009 unrest demonstrates how “(t)he administration of justice in Iran has significantly deteriorated since the 1979 Islamic Revolution.”

According to Maryam Jamshidi, an Iranian-American lawyer and founder of a digital magazine that provides analysis and commentary on Mideast and North African affairs, “the Iranian judiciary is not exactly an independent branch of government and reflects political concerns that are certainly not reformist-minded.”

Jamshidi noted that the “crackdown” on Iranian lawyers who have taken on politically sensitive cases since 2009 and before is not only a rights issue. It is also evidence of how the “entire Iranian judicial system is crumbling”.

But Jamshidi added that “since the beginning of the Islamic Republic lawyers have had some successes too that have resulted in tangible changes in legislation and in some cases the release of clients.

“Persecution has increased, but Iranian lawyers have made some incredible strides inside the country,” she told IPS.

The report comes as the U.S. issued further condemnatory remarks Tuesday against the continued imprisonment of 34-year-old Youcef Nadarkhani, an Iranian Evangelical Christian pastor who was imprisoned in 2009 and is reportedly facing the death sentence after refusing to recant his faith.

Nadarkhani’s arrest received widespread attention in 2011 by Christian groups in the U.S. urging Iranian officials to halt his execution.

Tuesday, which reportedly marked the 1,000th day of Nadarkhani’s imprisonment, State Department Spokesperson Victoria Nuland repeated the U.S.’s call for Nadarkhani to be released and for “Iranian authorities to respect and protect the freedoms and dignity of all its citizens”.

In October 2011, the semi-official Fars News Agency reported that the Western media had launched an “intense propaganda campaign” about Nadarkhani’s case and that he was “standing trial for rape and extortion, and not for apostasy and refusing to renounce his religion”.

In the article, the deputy governor-general of Nadarkhani’s home province of Gilan, Gholam-Ali Rezvani, is quoted as saying that “this Islamic state has nothing to do with those who have embraced other religions…But he (Nadarkhani) is a Zionist, a traitor and had committed security crimes.”

“The case of Youcef Nadarkhani is an example of how Iranian constitutional law…sets out a provision which affords the prosecution with recourse to Islamic law where an act which does not exist as a crime could be deemed as criminal in Islamic law,” he said.

Arrests made following Iran’s 2009 presidential election, which reportedly saw millions of Iranian protestors in the streets at one point – many of whom considered themselves part of the “Green Movement” – also feature in the report.

Bahareh Hedayat, a 31-year-old university student and women’s rights activist who was reportedly arrested for the fifth time in December 2009 and transferred to Evin Prison’s Ward 209 after being given a sentence of nine and a half years, is cited as “one of the harshest sentences given among the student activists”.

Ward 209 is infamously known for holding the many of the prison’s political detainees.

The “hope” behind PeaceJam’s publication of three reports on Iranian rights abuses, the first of which  was officially made public on Jul. 9, “is to bring international awareness of the human rights situation in Iran and to have human rights come to the forefront of the dialogue that foreign governments, U.N. bodies, and NGOs are having with Iran regarding the nuclear issue and sanctions,” said Kate Cumbo, PeaceJam’s director of programs.

Another goal stated in the report is to “urge the Iranian authorities to uphold Iran’s international commitments and human rights obligations as a signatory to the International Covenant on Civil and Political Rights (ICCPR).”

Following the series’ complete publication, PeaceJam will pass on a set of recommendations to relevant United Nations bodies.

Cumbo said that the report is also being translated into Turkish and Farsi and will be distributed to several offices of the Iranian and Turkish government.