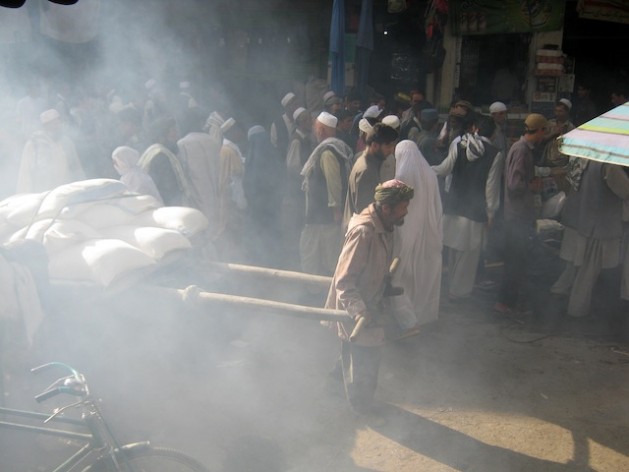 The apparently normal life in a Kabul bazaar is on artificial life support. Credit: Giuliano Battiston/IPS.

KABUL, Jul 16 2012 (IPS) - It is customary to focus on the amount of money the international community offers Afghanistan: the higher the sum and the longer the commitment, the lower the risk of further destabilisation. And so the 16 billion dollars pledged by the donors for the next four years at the Tokyo conference earlier this month has been widely welcomed. But such aid may not be quite the virtue it seems.

The message of strong support at Tokyo for Afghanistan’s economic development aimed to reassure Afghan people and others who are concerned that the money needs of the Afghan state cannot be met by domestic revenues.

This financing gap, “according to the World Bank, is likely to be 25 percent of GDP by 2021/22 and may be even higher in some of the intervening years,” Thomas Ruttig, co-director of the Afghanistan Analysts Network (AAN), writes in a recent comment.

Last December, at the international conference on Afghanistan in Bonn, Masood Ahmad, director of the Middle East and Central Asia branch of the International Monetary Fund, estimated that “the withdrawal of foreign troops from Afghanistan (from 2014) will reduce annual GDP growth by 2-3 percentage points or more per year,” and that “fiscal sustainability is a distant goal.”

Such evaluations lead to the idea that the more the international community commits to Afghanistan, the better it is for that country. But, Afghanistan scholar Antonio Giustozzi tells IPS that reduction of foreign aid could be positive “because it brings the level of expenditure more in line with what realistically can be absorbed by Afghan society.”

The May 2012 World Bank report argues that “a decline to a more ‘normal’ level of aid will present not only risks, but also opportunities for Afghanistan to transition to a more stable, self-reliant, and sustainable economy.”

Away from the cautious language of the World Bank, Antonio Giustozzi says that both the Afghan society and the Afghan state have over the years become embedded “in a form of patronage that creates dependency but does not stimulate development.”

The therapy now must be gradual detoxification, he says, and the level of aid should “decline, but slightly.” The World Bank report says “donors need to reduce future aid flows gradually to avoid major disruptions.”

The Afghan government, Giustozzi says, can begin to find ways “to spend less but spend better.” President Hamid Karzai could then be forced to carry out governance reforms and tackle corruption, as prescribed by the Tokyo Mutual Accountability Framework.

But the “paradigm shift” heralded in an annex to the communiqué released following the Tokyo conference about a cleaner government is a hopeless claim, Giustozzi says. “Corruption is not just a bit of sand in the machine, it is systemic. Politics is very much built on the system of corruption and patronage.”

A leaked diplomatic cable from the U.S. embassy in Kabul at the end of 2009 warned that initiatives that call on the Afghan government to bring major corrupt figures to justice “contain a serious dilemma: they would include some of Karzai’s closest relatives and allies and require the prosecution of people on whom we often rely for assistance and/or support.”

In Tokyo, the international community renewed its call to the Afghan government for transparency. Some Afghans would point out that the international community itself is at fault for subordinating long-term state-building to the goal of short-term political survival for the government, and for relying too long on the very people who are now in the way of a transparent and reliable institutional framework.

While only nominally aimed at institution-building, the key tools of international assistance were guided by short-term considerations and by political expediency, and “have proved to be very blunt,” Martine van Bijlert, co-director and co-founder of the Afghanistan Analysts Network writes in the introduction to ‘Snapshots of an Intervention. The Unlearned Lessons of Afghanistan’s Decade of Assistance’.

The plan ‘Toward Self-Reliance’ promoted by the international community and endorsed by the Afghan government is grounded in a similar oxymoron: the call for the Afghan state to get back its sovereignty and ownership is made by those who are preventing it from happening.

The presence of foreign armies and of the international community “is one of the major elements that prevents the State, the political system, the ruling elite, from gaining full legitimacy,” Antonio Giustozzi tells IPS. “Not necessarily because the foreigners pre-empt that, but because any government that relies on external support to stay in power does not have legitimacy.”