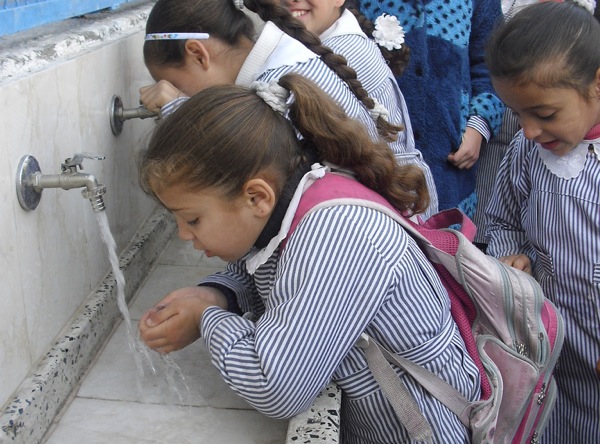 STOCKHOLM, Aug 30 2012 (IPS) - Last May the European Commission reported that scores of infrastructure projects in the Gaza Strip, financed mostly by the European Union, have been damaged or destroyed, wittingly or unwittingly, by Israeli military forces in the ongoing conflict in the Palestinian Occupied Territories.

Nevertheless, undaunted by this destruction, the Palestinian Authority plans to launch an ambitious half-billion-dollar project for a new seawater desalination plant in water-starved Gaza next year.

When the international community warns of an impending global water crisis in the foreseeable future, it rarely singles out the current plight of the Palestinians in the Israeli-occupied territories.

With more than 90 percent of its water resources unfit for human consumption, the Gaza Strip has no access to safe drinking water. As a result, 1.6 million Palestinians are deprived of one of the most fundamental necessities for human survival, says Dr. Shaddad Attili, minister and head of the Palestinian Water Authority.

Speaking on the sidelines of a weeklong international water conference hosted by the Stockholm International Water Institute (SIWI), he announced plans for the desalination project aimed at providing drinking water to Palestinians.

The project is the first to be unanimously approved by the 43 countries of the Union for the Mediterranean (UfM) and has been described as Gaza’s largest infrastructure project to date. The construction, which will be spread over a three-year period, is expected to begin in early 2013 and completed by 2016.

The funding will come mostly from Arab and European donors, based primarily on pledges made during the 2009 Sharm el-Sheikh Conference on the Reconstruction of Gaza.

The European Investment Bank (EIB) is providing technical assistance while the U.N. Environment Programme (UNEP) has endorsed the concept of a desalination facility as the only long-term alternative to supply Gaza with drinking water.

A core group of international financial institutions, including the EIB, the World Bank and the Islamic Development Bank, are designing a Project Fund mechanism to manage the financing of the project.

Rafiq Husseini , UfM’s deputy secretary-general for environment and water, told reporters that while the project is not regional or even sub-regional, “it has far reaching regional implications”.

“Everyone is aware of the project’s humanitarian, developmental and political importance,” he added.

But the ambitious project’s ultimate survival will depend on Israel, which has been accused of using water as a political weapon against the Palestinians. Between 2001 and 2011, Israel also destroyed about 61 million dollars worth of projects, including airports, schools, homes, orphanages and waste water management facilities.

Of the funding for these projects, about 36 million dollars came from the 27 members of the European Union, including financing from France, the Netherlands, Britain and Ireland.

Asked about a possible Israeli airstrike on such a major infrastructure, Husseini said the risk of doing nothing to to alleviate the sufferings of the Palestinians was greater than developing the infrastructure.

In a report released at the United Nations, the Permanent Observer Mission of Palestine in 2010 called the fair allocation of water rights a critical element for future political stability and achieving peace in the region as a whole, noting, “Water is at the heart of the Palestinian-Israeli peace process and it is one of the permanent status issues, along with issues relating to Jerusalem, borders, refugees, settlements and security.”

Following the Israeli occupation in 1967, and in violation of international law, Israel took control over all natural freshwater resources, including surface water, underground aquifers located beneath the Occupied Palestinian Territory, including East Jerusalem, and exclusive access to the Jordan River Basin, the report added.

Last month, the U.N.’s Special Committee on Israeli Practices highlighted the appalling living conditions in the Occupied Territories, including the lack of fresh water in Palestinian territories.

After a visit to Gaza, the three-member committee expressed concern over the Israeli practice of demolishing Palestinian homes and over the continued violence by Israeli settlers against Palestinians.

The committee also assessed the economic impact of the Israeli blockade on the Gaza Strip.

“These Israeli practices lead the Special Committee to one overarching and deeply troubling conclusion,” the chair of the committee, Ambassador Palitha Kohona of Sri Lanka said.