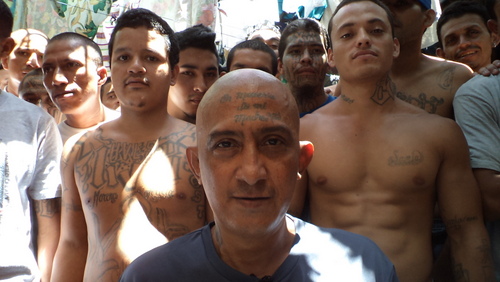 SAN SALVADOR, Aug 25 2012 (IPS) - The two main youth gangs in El Salvador and the government have exchanged the main points they would like to discuss in talks aimed at bringing to an end to two decades of spiraling criminal violence. But the media, legislators and the public at large remain hostile to the possible start of negotiations.

The leaders of Mara Salvatrucha (MS-13) and Barrio 18, who are in different prisons, made the first move, presenting the government of centre-left President Mauricio Funes with the demands they would want to include on the agenda of eventual negotiations.

In public, the government still rejects the possibility of sitting down to talk with the “maras” or gangs, principally because of the potential political fallout from an initiative that is not widely accepted, say analysts who spoke to IPS.

But the Funes administration has also provided the gang leaders with its list of proposals to be discussed in what would be the second phase of efforts towards curbing the violence in El Salvador – after the current contacts, which are preliminary and indirect, but with facilitators on both sides.

In March, the two maras agreed to a ceasefire between themselves and against the police, the military and civilians. Since then, the number of homicides in this impoverished Central American nation of 6.2 million people, up to then one of the most violent countries in the world, has been drastically reduced: from 12 to 14 a day to five or six.

“We believe the process is moving forward, although there are hurdles, there are obstacles, there are people and entities opposed to it,” the leader of one of the two factions of Barrio 18, Carlos Mojica, told IPS. Mojica is taking part in the preliminary, indirect negotiations with the government from a prison near the capital where he is doing time.

The gangs first emerged in the United States, created by Salvadoran refugees fleeing the 1980-1992 civil war. When many of the gang members were deported, they began to recruit youngsters living in the slums in this country, and the maras grew into violent organisations dedicated to extortion, kidnapping and drug trafficking.

The local media, which are mainly conservative, act as a sounding board for the broad public opposition to negotiations between the government and the maras, as do most of the members of the single-chamber Congress. But the media and the legislature both play a key role when it comes to accepting proposals set forth by the gangs.

The government’s role in the truce between the two maras is not clear. But it was generally understood to have acted as a facilitator. In March, some gang leaders were transferred to medium-security prisons – a move that analysts saw as part of the process that gave rise to an agreement.

Some of the gang leaders’ proposals for negotiations have to do with changes to legislation that currently excludes the members of maras from privileges like parole for inmates who are suffering from terminal illnesses or are over 65 years old.

“Look what they are asking for: changing the laws. That shows the power achieved by these groups,” analyst Dagoberto Gutiérrez told IPS.

According to official estimates, there are some 60,000 gang members in El Salvador, not counting the 10,000 who are in prison.

Other demands are even less likely to be accepted, such as the repeal of the anti-gang law approved by Funes himself in 2010, which outlaws the very existence of the maras.

Experts agree that the law, which focuses on law enforcement approaches to cracking down on gangs, has failed to generate results, just like past legislation based on a “zero tolerance” approach.

For example, it allows the police to arrest anyone suspected of belonging to a gang. However, the suspect must be released if there is no evidence that he or she committed a crime.

“Article 3 of the constitution stipulates that no one can be discriminated against because of race, sex or other consideration. But they do discriminate against us,” Mojica told IPS, surrounded by around 100 gang members held in the prison in the city of Cojutepeque, 36 km east of San Salvador.

The gangs are also demanding the repeal of articles that require that gang members classified as highly dangerous be held in isolation in special prisons.

These gang members are concentrated in the prison in the central Salvadoran city of Zacatecoluca, where they are held in total isolation. The facility is popularly known as “Zacatraz”, in reference to the notorious federal U.S. prison on an island in San Francisco Bay, which was closed in 1963. Mojica was held in the Zacatecoluca prison until March.

The mara leaders also want the elimination of the sentence reduction to which witnesses are entitled if they testify against others allegedly involved in a crime.

Prosecutors heavily rely on the sentence reduction mechanism to secure the conviction of gang members, who pack the cells of El Salvador’s overcrowded prisons.

But members of the maras say the mechanism is abused, and cases are thrown together with insufficient evidence.

They also want the suspension of police operations in areas with a heavy gang presence – an idea that is especially resisted by the communities in question and society in general.

“The police have a constitutional mandate to fight crime, and a halt to these operations in those areas cannot be considered,” commented Mauricio Figueroa, executive director of the Fundación Ideas y Acciones para la Paz Quetzalcoatl (Quetzalcoatl Ideas and Actions Peace Foundation).

“This could be an obstacle that could trip up the talks,” he told IPS.

For his part, Raúl Mijango, a former guerrilla commander and former legislator who is acting as a facilitator or mediator in this first preliminary and indirect phase of a possible negotiation process, assured IPS that these suggestions are not seen as “points of honour” by the gang members.

In July, the leaders of the two maras read out their petitions in private to Organisation of American States (OAS) Secretary-General José Miguel Insulza, who visited the country to learn about the pre-negotiation process.

These points were reported by the blog Política Stéreo.

Insulza promised to act as a guarantor of the agreement already reached and any future accords.

On Jul. 31, the Diario de Hoy newspaper published the list of proposals that the government presented to the gangs, which included a complete halt to all crimes in which people are killed or injured, and of kidnapping, extortion, robbery and drug sales.

Studies show that the gangs have been strengthened financially by means of drug trafficking and dealing, and especially extortion, which targets the civilian population indiscriminately, regardless of social class.

Extortion – for example, demands for protection money from bus drivers – was not suspended after March, and this has further dampened any possible public faith in the truce and in eventual negotiations, said the analysts consulted by IPS.

The government also proposes that all members of gangs involved in crimes or wanted by the authorities turn themselves in voluntarily, and suggests the handing over of all illegally-owned firearms or explosives.

In addition, it wants the gangs to reveal the whereabouts of the clandestine cemeteries where they bury their victims to hide all evidence of the murders.

The authorities reported that of the 680 people missing in the first half of the year, only 317 have been found.