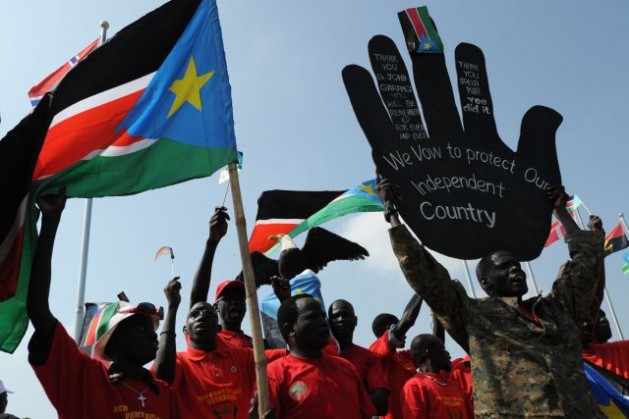 WASHINGTON, Sep 27 2012 (IPS) - The international community is reacting triumphantly following an agreement on Thursday between Sudan and South Sudan to resume oil production and trade, despite the accord’s failure to address two of the situation’s most intractable issues, on border demarcation and control over lucrative oil-producing regions.

“This historic agreement … breaks new ground in support of the international vision of two viable states at peace with each other,” U.S. President Barack Obama said in response. “The leaders of Sudan and South Sudan have chosen to take another important step on the path away from conflict.”

Sudan and South Sudan were facing significant international pressure to arrive at a deal prior to the current session of the United Nations General Assembly, failing even to come to terms by a Saturday deadline. A month and a half of talks – building on several previous rounds, facilitated by the international community – culminated in four days of direct negotiations in Addis Ababa between Sudanese President Omar Al Bashir and South Sudan President Salva Kiir.

In addition to resuming trade and oil production, which builds on a previous agreement made in August, the two presidents agreed to the creation of a 20-km demilitarised buffer zone along the border.

Yet while negotiators suggest that the new agreement could allow oil production to resume by the end of the year, the agreement did not touch on some of the most sensitive points of contention between the two countries: delineation of the undemarcated border more generally and control over the oil-producing border region of Abyei specifically.

No dates have yet been set for another round of negotiations

Without coming to agreement on those points, says longtime Sudan expert Eric Reeves, the talks should be seen as having offered “no progress – the international community is so invested in the African Union and the peace process and self-congratulation, it is unsurprising that they are way overselling this achievement.”

Sudan and South Sudan have been locked in recrimination and rising tensions for much of the latter’s short existence. When the two split in July 2011, following a decades-long civil war, the south took two-thirds of Sudan’s oil fields with it, but Sudan retained much of the processing and transport infrastructure.

Disputes over transit fees subsequently led the south to halt production in January, despite the fact that oil remains of massive significance to both countries’ economies.

Yet nine months later, the latest round of talks need to be seen as having produced only “the minimum necessary for the international community to excitedly celebrate an agreement that really will not do much to ensure that true peace comes to Sudan,” Reeves, with Smith College, told IPS.

“Al Bashir went into this knowing that the really tough, hardline guys in Khartoum – those who are insisting on the humanitarian blockade in (southern Sudanese) Juba Mountains and Blue Nile – were setting the negotiating parametres, and that they were going to be very narrow.”

The real news of the recent negotiations may revolve around the African Union’s mediation efforts.

Before arriving at the new agreement, a relatively more far-reaching AU proposal was tabled. This would have included a resolution of the control of Abyei, giving a percentage of Abyei oil revenue to Sudan, for use in certain development projects.

But while South Sudan agreed to the proposal, Sudan rejected it, calling the formulation futile.

“The African Union was told no for another time – this should be very humiliating for the AU,” Reeves says. He suggests that diplomatic action could now only come about if the AU negotiators take their proposal to the AU Peace and Security Council – and, if Khartoum again refuses, on to the United Nations Security Council.

“In that case, each step of the way, if they don’t push Khartoum, the AU loses credibility as a negotiating force,” Reeves says. “Mbeki’s credibility is already on the line, so there would be powerful incentive for him.”

For the immediate future, the prospects of the current agreement seem relatively strong, at least insofar as both sides have overwhelming economic incentives to adhere to it. But with inflation above 50 percent in both countries and some analysts voicing scepticism at the prospect that oil could actually begin flowing by the end of the year, the threat of instability will continue regardless of the recent agreement.