Nicaragua Stands Out in War on Drugs in Central America 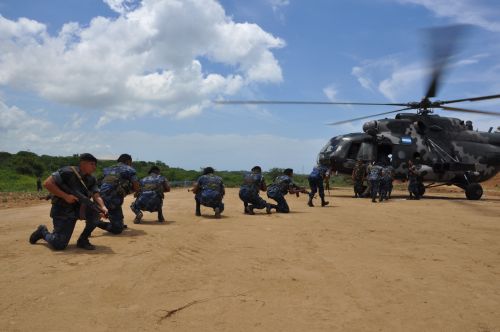 MANAGUA, Sep 15 2012 (IPS) - With strict security measures and the deployment of special heavily-armed troops, Nicaragua is waging a successful war in the courts, by sea, and on land against drug traffickers shipping drugs through Central America to the United States.

But activists say some tactics used by the police in the fight against internal drug smuggling and dealing undermine the rights of people in poor neighbourhoods.

One of the cases that have caused the greatest commotion involves 24 people accused of money laundering, organised crime and international drug trafficking. Police investigations link the accused to a Central American organised crime cell that shot Argentine singer and songwriter Facundo Cabral, a designated United Nations Messenger of Peace, in Guatemala in July 2011.

Cabral was killed by gunmen on his way to the airport in a van driven by Nicaraguan strip club owner and concert promoter Henry Fariñas, the real target of the attack, who was seriously injured.

Fariñas is the main person accused in connection with the crime ring in Nicaragua.

According to the investigation carried out in this country and Guatemala and Costa Rica, in conjunction with Interpol (the International Criminal Police Organisation), the hit on Fariñas was ordered because he allegedly stole a cocaine shipment from another accused drug trafficker.

In another case that has captivated the attention of the local and international press, 18 Mexicans arrested on the border with Honduras on Aug. 20 are facing trial. They were preparing to enter the country in six vans bearing the Televisa TV station logo, and were carrying forged media identification cards.

The authorities said the group had driven across Central America from Mexico 17 times to purchase drugs in Panama and Costa Rica before they were finally captured in Nicaragua, after being tipped off by the intelligence services.

In the vans they were carrying 9.2 million dollars in cash, in secret compartments. Traces of cocaine were found on the money.

The amount of money seized in the arrest was larger than the entire 7.6-million-dollar annual budget of the Public Ministry, which is in charge of the criminal investigations and lawsuits against organised crime, Attorney General Julio Centeno Gómez complained to IPS.

The best in the neighbourhood

The two high-profile trials, as well as constant military and police operations carried out over the last five years, put this country in the top spot in the fight against international crime in Central America, Roberto Orozco, a researcher on defence and security issues with Nicaragua’s Institute for Strategic Studies and Public Policies (IEEPP), told IPS.

“Nicaragua has actually been very effective (in the fight against drugs) at the international level, but because of the size of the mafias and their immense resources, any effort looks puny and insufficient,” he said.

Army and police chiefs describe Nicaragua as the safest country in Central America, and say it has become a retaining wall against drug trafficking, even though there are fewer than 30,000 police and military troops to patrol the country’s 280,000 square kilometres of exclusive economic zone in the Caribbean Sea and Pacific Ocean, as well as the land borders with Costa Rica and Honduras.

According to military figures, between 2011 and August 2012, 182,526 counterdrug operations were carried out, resulting in the seizure of 6.7 tons of cocaine, 93 vehicles and 41 boats, as well as the arrest of 1,288 people from Nicaragua and abroad.

Police chief Aminta Granera also provided IPS with statistics through her press office, indicating that between September 2011 and August 2012, 68 operations were carried out against international drug trafficking, and 12 local cells of cartels from Mexico and Colombia were dismantled.

The Sandinistas, who toppled the Somoza dictatorship in 1979, are currently in power again.

The police statistics also point to intense efforts against internal drug smuggling. In 4,106 operations carried out between January and August as part of an ongoing operation dubbed “Coraza Popular”, 3,917 Nicaraguans were arrested, and nearly 85 kg of cocaine, crack, heroin and marijuana were seized.

But human rights activists and experts on security say that in the crackdown on drug dealing, the police sometimes use questionable tactics that undermine the rights of citizens, especially in poor neighbourhoods.

Studies carried out by the IEEPP in 2011 show that eight drug trafficking groups with ties to Colombian drug cartels operate along Nicaragua’s Caribbean coast, while Mexican organised crime groups based in the capital, Managua, and in the southern city of Rivas are active along the Pacific coast.

The reports say the groups use Central America as a “service station” and use drugs to pay for logistical support along the northbound route.

That fuels the growth of the domestic market for drugs, and feeds local criminal rings.

To combat this, the police hold talks in neighbourhoods, schools and homes around the country, to inform people about the danger of drugs and urge them to collaborate.

But in another tactic, plainclothes police wearing facemasks reportedly spray paint messages like “drugs sold here” on the houses of alleged dealers. In addition, marches are held to target certain neighbourhoods, with signs blaring out anti-drug messages.

“If the police know drugs are sold in a certain house, why don’t they arrest the people there, hand the evidence over to the prosecutors, and bring formal legal charges against them?” Roberto Cajina, a researcher with the Latin American Network on Security and Defence, told IPS.

“Private property is violated, and the integrity of children and adolescents living in those houses is violated when they are stigmatised as being part of a crime ring. The principle of innocence is undermined, and above all, the integrity of individuals and the right to equality in the face of the justice system are injured,” he said.