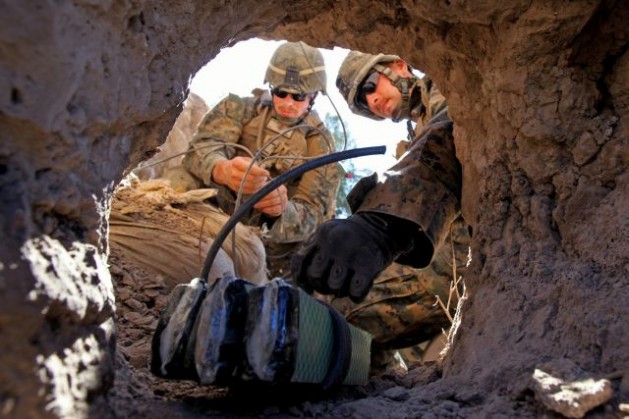 WASHINGTON, Sep 26 2012 (IPS) - With all foreign troops due to leave Afghanistan just two years from now, the news out of the Central Asian nation is becoming increasingly gloomy.

Adding to the pessimism is a just-released report by one of the most astute observers of the U.S. war, Gilles Dorronsoro, an Afghanistan expert at the Carnegie Endowment for International Peace (CEIP), who, among other things, predicts that the regime in Kabul “will most probably collapse in a few years” given current trends.

“Political fragmentation, whether in the form of militias or the establishment of sanctuaries in the north, is laying the ground work for a long civil war” that is likely to be fuelled by competition among regional powers, according to his report, which also joined the call by a growing number of experts for Washington to open negotiations with the Taliban as soon as possible.

Indeed, a series of setbacks just this month have renewed questions about even the short-term viability of the U.S.-led strategy to keep the Taliban at bay while bolstering the central government enough to persuade key elements of the insurgency to negotiate rather than fight on.

In recent days, some of the most die-hard Republican supporters of U.S. intervention have suggested throwing in the towel early, particularly in view of the growing number of fatal “insider” attacks – 51 so far this year – by uniformed Afghan personnel against U.S. and coalition trainers and soldiers.

The latest attacks prompted U.S. commanders to sharply curb joint operations by coalition and Afghan forces pending a massive re-vetting of the latter for possible Taliban sympathies. The move, according to more than a few observers, strikes at the heart of the U.S. strategy of building up Afghan forces while gradually transferring more security responsibilities to them.

“I think we should remove ourselves from Afghanistan as quickly as we can,” said Rep. Bill Young, the Republican chairman of the House Appropriations Defence Committee. “I just think we’re killing kids that don’t need to die.”

Similarly, Sen. John McCain, a steadfast backer of the Afghanistan war, also suggested that Washington should consider an early withdrawal, although he later backed away from the statement while blaming the administration of President Barack Obama for failing to follow the advice of his field commanders.

But the rise in so-called “green-on-blue” attacks and the subsequent reduction in joint operations between the two forces are just two of the signs that things are not going well for Washington and its allies, who, in principle, are committed to withdrawing all their combat troops from Afghanistan by the end of 2014.

Just last week, U.S. forces were stunned by an unprecedented Taliban assault on a heavily fortified coalition air base in Helmand Province in southern Afghanistan that, in addition to killing two Marines, destroyed six fighter jets worth a combined total of more than 200 million dollars.

The attack, in which the assailants wore U.S. uniforms, demonstrated both the insurgents’ sophistication and their continued presence in Helmand, the main focus of the U.S. “surge” of some 33,000 troops two years ago. Indeed, the coincidence of the attack and the withdrawal of the last “surge” troops last week underlined the potential holes left in their wake.

At the same time, a coalition airstrike that killed eight women collecting wood for morning cooking fires in eastern Afghanistan, combined with continuing wrangling between Washington and the government of President Hamd Karzai over the fate of foreign and Afghan prisoners held by the U.S. in Bagram Air Base, deepened existing tensions between the two governments.

The latest incidents all took place even before Dorronsoro finished drafting his deeply pessimistic report which noted that, in some respects, the current regime in Kabul is less prepared to survive a challenge by the Taliban than the communist government that hung on for three years against the mujahideen after the Soviet withdrawal in 1989.

There are “two major differences,” he wrote. “First the current regime does not possess the ideological and social cohesion of the communist regime, and its ability to survive militarily has not been demonstrated. …Second, the Taliban form a united movement with few rifts, compared to the infighting of the mujahideen in the 1990s.”

Already next year, when tens of thousands of coalition forces will remain in Afghanistan, Dorronsoro predicted that the eastern part of the country and the region around the capital itself will be “gravely threatened by a Taliban advance” with the onset of spring.

“The situation will only worsen after 2014, when most U.S. troops are out of the country and aid going to the Afghan government steeply declines,” according to the 23-page report, ‘Waiting for the Taliban in Afghanistan’.

As coalition forces withdraw, including the 68,000 U.S. combat troops that remain in-country, the Taliban will “automatically” advance, especially in the east and the south where the insurgency has been contained as a result of constant pressure by the coalition forces.

Dorronsoro is particularly critical of Washington’s counter-insurgency strategy which gave precedence to tactical military operations aimed at systematically eliminating local insurgent leaders over a political approach of engaging the rebel leadership based in Pakistan.

One indication of the Taliban’s resilience has been the fate of the coalition-backed “re-integration” programme which not only failed to bring over significant numbers of insurgents in the targeted areas – the east and the south – but also fueled corruption, according to Dorronsoro.

Meanwhile, the Karzai regime will face three major crises while the coalition withdraws: an economic crisis precipitated by a sharp drop in Western aid and spending; an institutional crisis with the end of Karzai’s term in 2014 and indications that much of the political elite are already preparing to go into exile; and a security crisis in which large parts of the country fall outside the government’s control despite the overwhelming official size of the security forces.

“Maintaining control of Afghanistan’s major cities and main transport corridors is …the only realistic goal,” according to the report.

Certain eventualities could stabilise the situation for a few years, including a reduction in Pakistani support for the Taliban, the development of divisions within the insurgency, and the possibility that a new president in Kabul who could inspire greater confidence and support than Karzai.

“In reality, these developments are unlikely and would come about only as a result of unpredictable events – a major political crisis in Pakistan or the death of the Taliban’s spiritual leader Mullah Omar, for instance,” according to the report.

In terms of recommendations, Dorronsoro calls for the coalition to strengthen security in the east and around Kabul, even at the expense of losing control of the south more quickly.

And while negotiations with the Taliban are unlikely before the troops withdrawal, Washington should understand that it will “not be able to pursue its longer-term interests in and around Afghanistan if it is not willing to deal with the Taliban” which, alone among the various contenders for power if the Kabul regime collapses, “can potentially control the Afghan border and expel transnational jihadists from Afghanistan”.

Thus, Washington “must not further limit its ability to open negotiations with the Taliban”, and coalition military and drone operations “should focus first and foremost on foreign jihadist groups”, not on the Taliban insurgency.

In his blog at the nationalinterest.com, Paul Pillar, a former top CIA analyst who served as the National Intelligence Officer for the Near East and South Asia from 2000 to 2005, called Dorronsoro’s recommendation “good advice”.

Sound policy, he noted, requires “getting away from the mistaken tendency to view the Afghan Taliban as if they were themselves a transnational terrorist group – which they are not, notwithstanding their previous alliance with Usama bin Laden.”