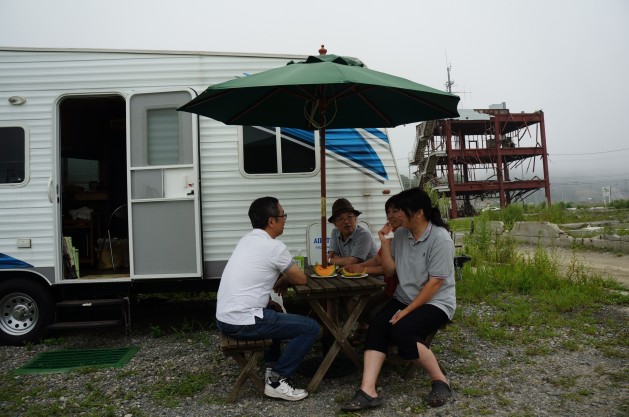 “The idea of starting my own company that deals with care giving emerged when I was in the evacuation centre after the disaster. People were helping each other to survive and this encouraged me to contribute to the devastated community,” she told IPS.

Yonekura, 52, lives in Kesenuma that recorded 1,300 dead or missing following the Mar. 11, 2011 earthquake and tsunami when waves as high as 30 metres crashed into the picturesque towns and villages that dot the coast of Miyagi prefecture, about  200 km northeast of Tokyo.

Miyagi along with Iwate, Fukushima, Akita, Aomori and Yamagata form the Tohoku region that was worst affected by the tsunami and the meltdown of the Fukushima Daiichi nuclear power plant that followed.

Even before the disaster Tohoku had a depressed economy that caused the steady migration of its young and better educated population to the cities, leaving behind men and women well past their prime to struggle with family-run farming and fishing.

It took exceptional courage for Yonekura to start her company and win respect as a woman who could make a mark in disaster recovery in Tohoku, a backward and  tradition-bound region where the average age is 65 years.

Yuko Kusano, of the Sendai-based Jo-Net that supports female survivors, says Yonekura has proved that disasters can catalyse change in women – even if they have lived a major part of their lives in the patriarchal culture of Tohoku.

“The loss of family members, jobs and homes forced women in Tohoku to rethink traditional roles that expected them to be supportive wives and mothers,” said Kusano who assisted Yonekura at the beginning.

Achieving income sustainability and security are a major concern among gender experts who support the idea of female disaster survivors searching for financial independence.

Experts point out that most jobs available for women who no longer work in family farms or fishing are part-time, such as in reconstruction projects or as office workers in local companies that are cutting costs.

Women’s groups report that younger females, faced with a lack of jobs in their damaged towns, are forced to leave for the big cities where they end up in the sex industry.

“Long-term stability in a post-disaster society can be achieved only by planning carefully. Education, skill building and, most importantly, providing space for women to learn through discussions that they can do it, is the way to achieve gender-led recovery,” says Hiromi Narita, a gender expert.

Narita who leads seminars in computers and business skills at a single mothers forum, a section of the Miyagi local government said, “We have seen an increasing number of single women from the disaster areas joining our classes with the intention of finding new jobs or securing the ones they already hold down.”

While jobs for women have taken priority in disaster recovery, there is a need to provide emotional support since a large number of survivors are suffering from depression and anxiety.

Medical records filed from the Tohoku area indicate an increase in heart disease, hypertension and depression linked to inability to adjust to drastically altered lives in cramped and lonely evacuation centres.

The health and welfare ministry reported in April that the longevity of Japanese women, once ranked a high 85.90 years, has dropped by 0.04 years following the disaster. Females comprise half of the 345,000 people listed as displaced.

Rei Yamaya, who is a counsellor at the Morioka Women’s Centre, explains that her work with many of the women has revealed that trauma lingers but is ignored by authorities as a key concern in gender-based disaster recovery.

“In Tohoku’s conservative society, women rarely speak of depression or reach out for help for fear of appearing as bad wives or incompetent mothers. Reaching out to these survivors must, therefore, be sensitive to local cultural constraints,” she said.

Yamaya’s group has started cafés for women as a space where they can talk without fear of discrimination. “By eating tasty food along with their children, they break through their silent suffering,” she said.

The centre is supported by international funding, seen as an illustration of the lack of official support for trauma support programmes, other than tax concessions and other incentives to attract investment in Tohoku.

Yonekura agrees. Apart from providing health services to the elderly, she also plans to extend her work to provide emotional support, given the urgent needs in her community.

“I had to work hard to even convince my husband to allow me to start my own company. I can sympathise with female disaster survivors,” she said.

Says Kusano: “Basically, the women are starting from scratch, knowing that there is no returning to their former lives. We have to work together to learn to accept that a disaster can result in change for the better – learning new skills is the easy part.”