WASHINGTON, Oct 19 2012 (IPS) - In the aftermath of last week’s elections to the International Monetary Fund (IMF)’s executive board, Brazil and others are expressing frustration that a reforms process aimed at increasing the representation of developing countries is being stymied by European countries. 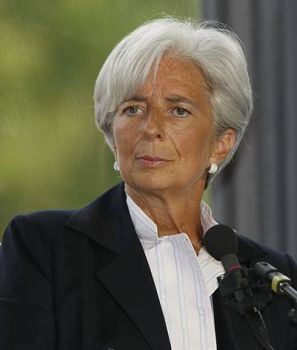 IMF chief Christine Lagarde has urged members to act on a suite of reform measures that would significantly increase the voices of developing countries, with mixed results. Credit: MEDEF/cc by 2.0

“There was some movement, but in my opinion this so-called reduction in the number of European chairs has petered out into a reshuffling that is largely cosmetic in nature,” Paulo Nogueira Batista, the IMF executive director for Brazil and several other Latin American and Caribbean countries, told IPS. “The Europeans have cleverly upgraded the representation of the emerging markets of the E.U., such as Turkey and Poland.”

The IMF’s executive board, based at the institution’s Washington headquarters, consists of 24 members, most of which represent shifting constituencies of the Fund’s 188 members. In 2010, a package of reforms was agreed to, aimed at rectifying longstanding concerns over the IMF’s governance imbalance.

While these reforms were meant to be finalised during the annual meetings of the IMF and World Bank, held Oct. 9-13 in Tokyo, and implemented this coming January, both deadlines now look set to be missed as the United States focuses on its presidential election and IMF members are deadlocked on key issues.

Part of this reforms package includes changes in who sits on the executive board, with the Europeans agreeing to give up two seats in order to increase the representation of developing countries. That process has now led to an unusually large amount of movement on which countries will align with which constituencies – the most significant changes in this regard since the early 1990s.

The second part of the reforms process has to do with voting rights, based on “quotas” arrived at through a contentious and complex formula that has favoured developed economies. Calls have mounted for the system to change, particularly to take into account a changed global economic situation in which so-called middle income countries (particularly the BRICS, referring to Brazil, Russia, India, China and South Africa) are increasingly crucial players.

Batista says that reforms of the quotas formula constituted the single most controversial topic discussed in Tokyo. Countries including the United States, Brazil and most of the BRICS want the formula to be based on gross domestic product, while the Europeans stress the issue of economic “openness”, which would specifically favour EU economies.

“The Europeans use a highly unusual definition for ‘openness’ – a definition so strange that I have proposed we rename this ‘Europeanness’,” Batista said, speaking not in his official capacity. “The main role seems to be to artificially inflate the quotas of European countries.”

In recent days, Batista, already one of the more outspoken of the IMF executive directors, has been openly critical of the European bloc at the Fund.

“What we’ve seen in Tokyo is that, unfortunately, some Europeans are backtracking on their pledges to quota review,” he told IPS shortly after arriving back to Washington from Tokyo. “This is a major concern, as the credibility of the Fund, of the G20 and of the individual countries is predicated on the faithful implementation of what they sign up to in the communiqués – and we’re not going to take this lightly.”

Over the past year, Brazil has played an increasingly central role in enunciating the demands of developing countries, a push that has been particularly embodied by the IMF reforms process.

“Brazil has been wonderful in that they have outright threatened not to turn over certain financial commitments to the IMF until the quota reforms move forward – not only regarding the 2010 agreements, but surrounding the 2013 deadline as well,” Jo Marie Griesgraber, the executive director of the New Rules for Global Finance Coalition, a Washington-based international network, told IPS.

“The Brazilians have been very forthright in this process – putting out notes on ridiculous anomalies, presenting these to the board and then, very unusually, making them public afterwards.”

Now the world’s sixth largest economy – larger than that of the U.K. – Brazil has in recent years been making a concerted effort to step up its bilateral relations throughout much of the Global South, particularly in Africa. Under former president Luiz Inacio Lula da Silva, the country opened more than a dozen new embassies across Africa, with the 37th reportedly opening soon, in Malawi.

Brazilian officials have increasingly focused on foreign aid funding, which a 2010 tabulation suggested was already reaching four billion dollars a year across all parts of the government, and growing rapidly. That’s a significant turnaround for a country that for decades was a net aid recipient.

More importantly, Brazilian aid has become characterised by a uniquely forceful emphasis on South-South technical assistance, particularly focused on agriculture and social issues. This is an approach that could increase substantially given new projects now in the works.

Today, Brazil is at the centre of a global push to define a new development paradigm, which has only received greater momentum – and focus – in the aftermath of the global economic crisis.

“What’s at stake here is not just about IMF voting share. Since the crisis, the previously preferred models, the so-called Washington Consensus, have been called into question,” Gregory Chin, a senior fellow with the Centre for International Governance Innovation, in Waterloo, Canada, told IPS.

“The BRICS countries are advocating a different understanding of best practices on national development, and the Brazilians have been the leading diplomatic force in pushing these changes.”

Such models, including what is known as countercyclical financing, directly contradict the approaches long pushed by institutions such as the IMF and the U.S. Treasury. Yet with several of the emerging economies having weathered the financial crisis better than anticipated, Chin says that such models are now gaining greater attention in the Washington headquarters of the IMF, the World Bank and beyond.

Even as Brazil and others work to strengthen the reforms process within the IMF, Chin points to the broader parallel effort to set up a BRICS-funded development bank.

“That is, they have one foot outside of the system versus one foot inside,” Chin says. “They’ve made sure to create for themselves this alternative track, because they’ve seen how slow things are happening in the IMF.”

Analysts are now looking to the next BRICS summit, to be held in Durban, South Africa, in March, with the South African hosts reportedly pushing hard for agreement on a major announcement on a BRICS development bank. Many are also weighing whether such an institution would be able to move beyond a BRICS-only institution to work throughout the developing world – potentially falling in line with Brazil’s focus on South-South cooperation.

“Brazil is trying to increase its role in the IMF and other international organisations and G20, and I think this is happening – all of the BRICS countries are raising their involvement in these institutions in the hope that these institutions will change fundamentally,” IMF executive director Batista says.

“Hopefully, the IMF will eventually no longer be a ‘North Atlantic monetary fund’, dominated by the North Atlantic. Although we are running up against a lot of institutional inertia, the IMF and other international fora must become truly international if they want to be relevant in today’s world economy.”