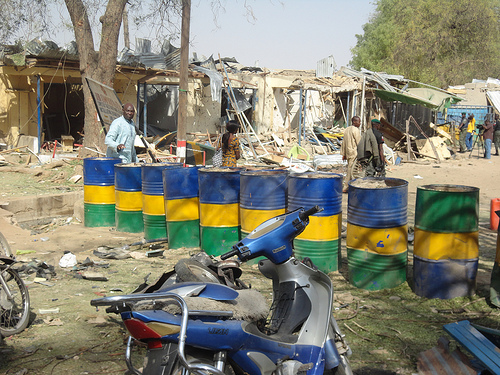 KANO, Nigeria, Oct 16 2012 (IPS) - Locals in the city of Maiduguri in the northeastern Nigerian state of Borno have intensified their calls for the military to withdraw from the town, the stronghold of the Islamist extremist group Boko Haram, after claims that they are being maltreated and abused.

The people residing in Maiduguri have been paying a heavy price for the Islamists’ guerrilla war, as the security forces accuse them of non-cooperation and shielding the Islamists.

“We are terribly disturbed by the wave of incessant retaliatory attacks by security forces on us,” local resident Bulama Abbagana told IPS.

“Even if we were in a state of war with a rival country, civilians should not be killed and maimed in the way the military is doing,” Abbagana angrily told IPS over the phone.

Boko Haram, whose name means “western education is sin”, has for the past three years been attacking government institutions, including suicide bombings of the United Nations building in the capital, Abuja. The worst attack was the Jan. 20 assault at the ancient city of Kano that claimed over 180 lives.

Boko Haram has adopted a Taliban style approach and is alleged to have links with Al Qaeda in North Africa. They want to impose Islamic law in a country sharply divided between a majority Muslim north and Christian south.

One resident who does not want his name in print for fear of reprisals told IPS: “We wish to be left with Boko Haram, we would have incurred less trouble than with the military.”

Maiduguri, the headquarters of Boko Haram activity in Nigeria and the staging point for the insurgents, appears to have become a battleground.

The most recent attack was on Monday, Oct. 15 when sustained strikes on the city by government soldiers resulted in a number of bomb explosions and the lockdown of the city centre. On Sunday, Oct. 14 the city was rocked by a roadside blast and two separate gun attacks that killed at least four people including a local chief, residents and the military said.

Prior to this, on Oct. 8, indiscriminate shooting allegedly committed by the members of the Joint Task Force resulted in further violence.

It is claimed that Nigerian troops in Maiduguri went berserk after their patrol vehicle was hit with an Improvised Explosive Device, killing two soldiers, including a lieutenant, and injuring others. They were alleged to have started shooting indiscriminately in a densely-populated area of Lagos Street.

Residents say over 30 people were killed in the assault, and houses, businesses and shops were burnt down and vandalised.

“If you see the level of damage on our burnt houses and shops, you may shed tears,” Bana Modu, whose own house suffered severe damage, told IPS.

The feud between Nigerian security forces and residents in Maiduguri has reached its climax, with both sides pointing a finger of blame at each other.

The security forces claim that residents are not helping in the fight against Boko Haram. In several instances, the military have complained bitterly, accusing civilians of colluding with the attackers, as Islamists have launched attacks on them from rooftops and trees.

In turn, local residents complain that the security forces regard every person in civilian clothes as an enemy.

“Whenever there is a bomb explosion, the security used to besiege the area and beat any one found in their way. Some are killed in the process,” banker Abubakar Mohammed told IPS over the phone.

Businesses here have been crippled in the last three years.

“Many people have fled the area. I don’t have anywhere to go, but I could have left to escape from the attacks from two fronts: Boko Haram and the security forces,” Msheliza Dalwa told IPS.

The government of Borno state, where the crisis erupted in 2009, has shown no interest in withdrawing the troops, and has merely urged the security forces to respect individuals.

“Believe me, if the federal government withdraws the Joint Task Force from Borno, all of us will be chased out of the state by insurgents,” state Governor Kashim Shettima said, addressing journalists on the topic of the recent assault.

Shehu Sani, president of the Civil Right Congress, a local human rights group in Nigeria, told IPS: “The Nigerian security forces have been using disproportionate force which we see of equal magnitude with that of Boko Haram.”

According to the New York-based Human Rights Watch, no fewer than 2,800 people have been killed in the attacks largely claimed by the Islamists since the violence began in 2009. A report released by the global rights watchdog last week says Boko Haram’s assaults could be described as crimes against humanity.

“We will be happy to punish those committing wanton killings before the International Criminal Court so that those involved will not go free,” Ibarhim Badamasi, a resident in Maiduguri, told IPS.

The Joint Task Force is accused of embarking on house-to-house searches to hunt down the insurgents, and is alleged to have engaged in secret detentions.

“Some people arrested are dying in military cells without food, even the way people are being tortured could lead to the death of many,” a suspect arrested and subsequently released told IPS on condition of anonymity.

The security forces have denied committing killings and torture while restoring order. In a press statement to reporters, Lieutenant Colonel Sagir Musa said his men did not kill or assault civilians.

“There are no established or recorded cases of extra-judicial killings, torture, arson and arbitrary arrests by the JTF in Borno state,” Musa said in a statement.

“Very few cases of unprofessional conduct by some personnel are documented and those concerned have been punished while others are undergoing legal processes and Court Marshal,” he added.

The JTF has declared success in the fight against Boko Haram. It claims to have arrested over 60 members on Oct. 7 and killed a commander called Bakaka or “one-eyed man”, who is said to be close to the group’s leader, Abubakar Shekau. It also claimed to have killed the sect’s spokesman, Abu Qaqa.

However, in a video message posted on YouTube, Shekau refuted the claims of Qaqa’s death. He only admitted that some members have been killed and their wives arrested by Nigerian forces.

A recent report by a U.N. panel of experts highlights the connection between the recent political instability in Côte d’Ivoire and Mali, and suggests that radical Islamists with links with Al Qaeda’s North Africa branch are attempting to strengthen their presence across Africa, Boko Haram included.