YAOUNDE, Feb 7 2012 (IPS) - Ahmadou Lamine has been forced to close his business selling fuel imported from Nigeria, known locally as “zoa-zoa”, because of the Islamic extremist group Boko Haram. 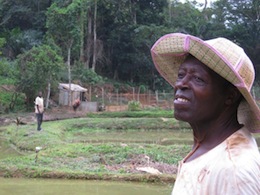 A farmer in Cameroon. The closure of Nigeria's border with northern Cameroon has had a negative economic impact on this region. Credit: Fanny Pigeaud/IRIN

Lamine, from Maroua, the capital of Cameroon’s Far North Region, ran out of stock after Nigeria temporarily closed its border with Cameroon’s northern region. The move came after the Christmas Day bombings of Nigeria’s churches by Boko Haram, which killed dozens of people.

“Motor bike riders who used to supply us with zoa-zoa from neighbouring Nigeria couldn’t do so anymore. I was forced to shut my business premises,” Lamine told IPS. “I don’t know how I am going to cope with paying the rent on my house, let alone feed my family and pay my children’s school fees,” he added.

The closure of the border has had a negative economic impact on this region. Fuel prices here have doubled, jumping from fifty cents a litre to about one dollar. And a similar trend is recorded with other imports from Nigeria like sugar, milk, flour, beverages, sweets and oranges.

“It’s difficult,” Alima Aissatou, a housewife in Maroua told IPS. She pointed to her near-empty basket that would have previously been filled with food purchased from Maroua’s main market. “How do you feed a family with this?” she asked.

The closure of the border is not only affecting businesses and households, it has also led to a reduction in customs revenue. The interim Customs Bureau Chief for Maroua, Philemon Tamfu, told IPS that the impact of the border closure was most felt “in Limani, Fotokol, Kolofata and Kouseri, all border towns in the Far North Region where all (customs) entries and exits are recorded.”

Speaking to IPS by phone, the Customs Bureau Chief for Limani, Alain Symphorien Nzie, said that the area used to receive 239,000 dollars every 10 days in customs revenue, averaging 718,000 dollars a month. But a few weeks after the border was closed, it could barely manage to generate 50,000 dollars. Limani, a border town, is home to citizens of Cameroon and Nigeria.

“I had to improvise all means possible to come up with the 50,000 dollars. This amount is likely to keep on dropping if the blockage continues,” he said of the minimum quota that customs departments need to meet.

A similar trend has been noticed in the border town of Fotokol. Instead of the 40,000 dollars that is usually collects over the first 10 days of January, only 4,000 dollars was received.

International news agency CNN quoted trade and customs officials in Maroua as saying that nearly 80 percent of its regional economy has shrunk since the closure of the borders.

Nigeria’s borders with Cameroon remain sealed as Africa’s most populous nation fears that the extremist group Boko Haram might be using the northern parts of Cameroon as a base.

This comes after the unearthing of a cache of arms, suspected to have been smuggled in from Cameroon, in Borno State, Nigeria. The arms included AK47 rifles, pistols, rocket launchers, bombs, and detonating bomb cables.

Cameroon’s government is concerned that the extremist group could be infiltrating and establishing itself in the country. Wikileaks revealed that President Paul Biya raised the concerns in a conversation with United States Ambassador to Cameroon, Janet Garvey.

“Biya was concerned about the threat of Islamic extremism …He was beginning to worry about Islamic extremists infiltrating Cameroon from Nigeria through Cameroon’s mosques,” Wikileaks stated.

The former minister for Territorial Administration and Decentralization, Marafa Hamidou Yaya, also expressed similar fears to the ambassador. He reportedly said: “there were a lot of desperate people among the Muslim communities in the North, and Douala in particular, and some of them had unexplained money.” Douala is the country’s economic capital.

Evidence on the ground suggests that Boko Haram has already infiltrated Cameroon. In Lagdo, a locality in the Far North Region, villagers have reported that people with long beads and red or black headscarves have been combing the area and spreading the group’s extremist doctrine.

“They came here and told me that all our problems are caused by western education and western ideas,” a resident of Lagdo told IPS, as he cast a furtive glance around. “They also said they will give me a lot of money if I joined their group. They looked dangerous, so I lied that I would consider their proposal. I am afraid that they may come again.”

The threat of the group’s infiltration of Cameroon has put security, political and traditional authorities on the alert.

On. Jan 19, the governor of the North Region, Gambo Haman, said: “the Boko Haram being chased from Nigeria’s northeast, as well as thousands of runaway Chadian soldiers in irregular situations here, must be closely monitored to avoid unwanted trouble throughout the national territory.”

He said surveillance has been reinforced and many Quran learning centres were shut down, and their teachers are being closely monitored by security intelligence.

The Nigerian newspaper, Sunday Tribune, reported on Jan. 29 that Cameroon security forces had recently blocked an attempt by 25 itinerant Arabic teachers to cross into Cameroon. “We stone-walled them,” the source reportedly said.

Meanwhile, government authorities are liaising with religious groups to guard against the group. The senior Divisional Officer for Wouri in Douala, Bernard Okalia Bilai, convened a meeting of Imams and Muslim community leaders to jointly come up with strategies to stop the group’s infiltration of Cameroon.

“Their doctrine is anti-social,” Bilai said. “It is a doctrine that persuades young graduates to rip up their degrees…It is a doctrine that condemns what today constitutes the values of our society. Top authorities of the country don’t accept that such hateful dogma is established in our communities…we must be vigilant.”

But these efforts may be too little, too late. In an exclusive interview with the UK-newspaper The Guardian on Jan. 27, a senior member of Boko Haram disclosed that recruits from Cameroon, Chad and Niger have already joined the group.