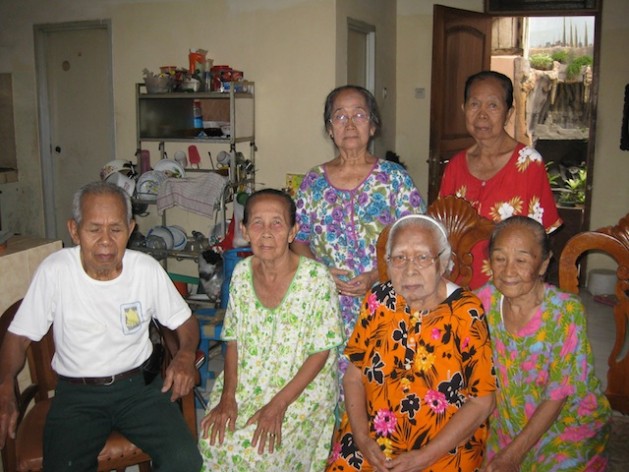 JAKARTA, Oct 27 2012 (IPS) - If the caste system existed in Indonesia the 10 elderly people who live in Jakarta’s Kramat Street would surely be untouchables: for decades they and their families have been banned from jobs and access to education and, until 2005, their identity cards marked them as former political prisoners.

They are survivors of the 1965-66 military crackdown on the now outlawed Indonesian Communist Party (PKI), during which time between 500,000 and three million people were massacred and thousands tortured and imprisoned without trial.

Ostracised since General Suharto ousted independence leader Sukarno in 1965 and began a 32-year dictatorship marked by anti-communist zeal, the former prisoners interviewed by IPS at the old two-story villa in downtown Jakarta offered a string of traumatic tales that give but a glimpse into a blood-soaked chapter of Indonesian history that many have chosen to forget.

Pak Rosidi, an 86-year-old former agricultural engineer who graduated from the University of New England in Australia, recalled in perfect English the horrors he suffered until 1980 in the notorious detention camp of Baru Island, where a recent investigation uncovered conditions that had amounted to slavery.

“I was dismissed from my job at the Department of Agriculture in 1970 and arrested because I was Sukarnist, not a communist,” he said.

“I am speechless about my years in prison. I was beaten, and continuously electrocuted for three hours at a time during those years,” the soft-spoken Rosidi recounted.

“I had three children and I was married before I went to jail, but my wife rejected me when I returned,” he added.

Strained family ties are a common theme in the stories of former prisoners, at a time when fear pushed children to turn against their parents in a bid to escape a life of discrimination.

Like many others, Rosidi faced difficulties making a living after jail because his identity card was marked  ‘Ex Tapol’ (former prisoner). That barred people like him from decent jobs, and banned them from careers in law, politics and the military.  Their children were denied access to university education.

Ibu Snanto, now 85 and a housemate of Pak Rosidi, was in jail from 1966 to 1975 because her husband was a communist party member.

“My husband was the communist and I was only a housewife, but they arrested me and I was often electrocuted and sexually abused.  I suffer from heart problems and trauma because of those years,” she told IPS.

The massacres started against the backdrop of the Cold War on Oct. 1, 1965, when a group inside the armed forces calling itself the ‘Thirtieth of September Movement’ kidnapped and killed six senior army generals, allegedly to prevent a coup against Sukarno, who was sympathetic to the PKI.

How many were killed and tortured, and the number who were imprisoned or are still alive, is not clear.

“We have spent two years of inquiry to find the numbers of people killed, but we cannot conduct validation. We haven’t had help from military officials,” Nur Kholis, a senior executive of the official Indonesian National Commission on Human Rights (Komnas HAM), told IPS.

In the first official report of its kind – released last July and based on interviews with 349 former prisoners – Komnas HAM acknowledged that ”gross human rights violations” had taken place during the purge, including “murder, slavery, torture, sexual abuse, disappearances, cleansing, forced displacement and persecution.”

The report recommends that the government of Indonesia, the world’s most-populous Muslim nation, launch a national reconciliation process, and that the attorney general prosecute those found to be responsible for the crimes.

Kholis recounted to IPS the story of a witness in South Sumatra island who saw army soldiers push 100 half-starved prisoners into the sea.

He also recounted the tale of a woman survivor in the city of Medan in North Sumatra island who was forced to lie down naked while soldiers pushed bunches of lit matches into her vagina.

Details of the anti-communist massacres are not found in Indonesian schoolbooks, and communism remains banned to this day. As recently as 2008, police summoned a group of artists in Bali to court for using symbols of the communist party during an exhibition.

Although Indonesia started its path to democracy in 1998 after Suharto was ousted as president, the current president, Susilo Bambang Yudhoyono, also a retired army general, has also been reluctant to re-open old wounds.

Meanwhile, the 10 former prisoners living on Kramat Street want nothing more than to have their names cleared of any wrongdoing.

“I want the stigma to be taken off us and a recognition that the government says that we are good people,” 87-year old Ibu Pujiati, who spent 14 years in jail after 1965 for being a labour activist, told IPS.

Australian university professor Robert Cribb, who has written extensively about Indonesia’s recent history, believes that the government’s refusal to acknowledge the suffering of victims has had a  “profound effect” on the former prisoners.

The biggest Muslim organisation in Indonesia, Nahdlatul Ulama (NU), whose members took part in the persecution and killing of suspected communists alongside the military, believes that the former prisoners are best forgotten.

“They should not look for compensation. The conflict should be forgotten,” As’ad Said Ali, a senior NU official, told IPS.

He justified the killings and persecution as “human nature,” saying the massacres were driven by “revenge” for previous deadly conflicts between the PKI and NU.

“We don’t like revenge because everything depends on God, but we want official rehabilitation for all of us,” said former prisoner Ibu Snanto, eliciting nods from fellow victims at the Kramat Street home.

The poetry of former prisoner Putu Oka Sukanta succinctly paints those years as a time “when human life was as cheap as a gutter rat’s.”

Seventy-three-year-old Sukanta describes Leftists as being “hunted down by hungry dogs”. Although never tried, he was jailed for 10 years for belonging to the cultural organisation Lekra, which was affiliated to the communist party.