Nanotechnology could be a powerful tool to reduce the climate impacts of fossil fuels and enhance the efficiency of clean energies. 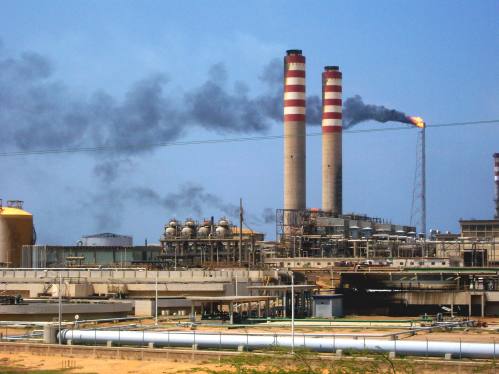 CARACAS, Nov 14 2012 (IPS) - Venezuela is studying the use of nanotechnology as a means of reducing emissions of greenhouse gases caused by the oil industry.

Nanotechnology operates at the sub-microscopic scale: a nanometre is a unit of measure equal to one billionth of a metre.

“We are seeking to use nanoparticles of metallic salts, such as iron, nickel or cobalt nitrates, as catalysts in oil-related processes that produce greenhouse gas emissions,” said Sarah Briceño, a researcher at the Centre for Physics at the Venezuelan Institute of Scientific Research (IVIC).

Catalysts are substances used to speed up chemical processes, “and our goal is to develop catalysts adapted to Venezuelan industry that will make it possible to reduce greenhouse gas emissions from activities such as oil refining and fuel consumption by motor vehicles by up to 50 percent,” Briceño told Tierramérica*.

Venezuela, a founding member of the Organisation of the Petroleum Exporting Countries (OPEC), extracts close to three million barrels of oil a day and has over two billion barrels of heavy crude oil reserves.

There are six refineries in the South American country that process a total of 1.1 million barrels daily.

Meanwhile, according to OPEC figures, the country consumes 742,000 barrels of different types of fuel daily, of which 300,000 barrels correspond to the gasoline used by more than six million motor vehicles.

The Ministry of the Environment reports that Venezuela is responsible for 0.48 percent of worldwide emissions of greenhouse gases and 0.56 percent of one of these “villains”, carbon dioxide.

During the experimental phase, “we have observed with scanning electron microscopes the chemical reactions between the metallic salt nanoparticles and the surfactant agents (which influence the surface tension between substances) involved in these processes,” said Briceño.

Since the concept of nanotechnology – the manipulation of matter at the molecular and atomic level – was first introduced in 1959 by U.S. physicist Richard Feynman (1918-1988), winner of the Nobel Prize in Physics in 1965, it has been developed in a wide range of fields including medicine, pharmaceuticals, energy, electronics, metallurgy and environmental conservation.

“The entire periodic table (of elements) can be taken to the nano scale. We are focusing our research on how Venezuela, with its technology and infrastructure, can make this environmental contribution through its work with hydrocarbons,” explained Briceño.

“Our emphasis is on the reduction of emissions of nitrous oxide and methane, two of the most potent greenhouse gases,” she added.

The research is expected to yield results in 2013. Putting these to use in industry will be a long-term objective, given the scale of work in the laboratory: at the IVIC results are obtained in masses of particles that weigh 0.1 grams, while oil production in Venezuela in a single day equals 400,000 tons.

The relationship between energy and the environment provides fertile ground for nanotechnology, as demonstrated by the research undertaken at the U.S. Massachusetts Institute of Technology (MIT), where nanoparticles containing iron have been mixed with oil in order to make it possible to clean up offshore oil spills with magnets.

“The energy demand will increase in coming years, and we need to be able to generate cheap, abundant energy with the lowest possible environmental impact. Fossil fuels are not an adequate alternative, but even worse is using them badly when there are incredible opportunities to make them so much more efficient,” said Javier García Martínez, director of the Nanotechnology Laboratory at the University of Alicante, Spain.

Nanotechnology “offers the opportunity to generate new materials and processes, and in the field of energy there is great potential to improve the efficiency of the photovoltaic cells that make up solar panels,” Venezuelan consultant Juan Carlos Sánchez told Tierramérica.

Sánchez is a member of the Intergovernmental Panel on Climate Change (IPCC), which was awarded the Nobel Peace Prize in 2007 jointly with former U.S. vice president Al Gore (1993-2001).

“The development of processes through nanotechnology aimed at greater and more effective use of solar energy isn’t necessarily in the interests of the big oil producers, whether companies or countries,” said Sánchez.

“Any technology that reduces greenhouse gas emissions is bad for their business, since the demand for oil would decline with an increase in the use of solar energy,” he explained.

In his opinion, Venezuela should direct its efforts towards other technologies that reduce the emission of greenhouse gases associated with oil industry activity, “such as so-called sequestration of the carbon dioxide generated in the refineries, in order to sink it in the subsoil of oil wells and keep it from entering the atmosphere.”

Other OPEC members are moving forward with this type of research, including Saudi Arabia, Algeria and the United Arab Emirates, as a response to the fingers of blame pointed at the oil-producing countries as being responsible for global warming, said Sánchez.

Venezuela could use its thousands of old, abandoned oil wells for this purpose, burying carbon dioxide more than 1,000 metres underground.

Briceño, meanwhile, thinks that the results achieved through the research at the IVIC could help to promote studies for the application of nanotechnology to other environment-related areas of the Venezuelan oil industry.

One example is the use and disposal of petroleum coke, a solid waste byproduct of oil refining with a carbon content of over 90 percent. Venezuela produces 20,000 tons of petroleum coke daily during the upgrading of heavy and extra heavy crude oils to make them light enough for most refineries.

The dust from the resulting mountains of coke affects communities in eastern Venezuela who live near the crude oil upgrading facilities. Perhaps at some point in the future, the impact of this waste could be lessened through treatment with nanoparticles.
* This story was originally published by Latin American newspapers that are part of the Tierramérica network. Tierramérica is a specialised news service produced by IPS with the backing of the United Nations Development Programme, United Nations Environment Programme and the World Bank.