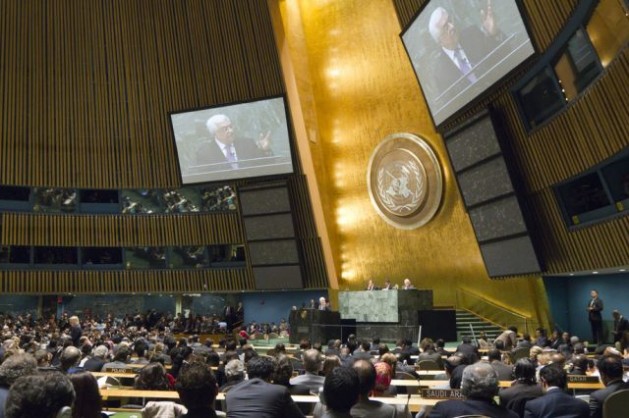 UNITED NATIONS, Nov 30 2012 (IPS) - Amidst thunderous applause – and the spontaneous unfurling of a Palestinian flag in the General Assembly hall – the U.N.’s highest policy-making body Thursday voted overwhelmingly to elevate Palestine from an “observer” to a “non-member state”.

The final vote was 138 in favour against nine opposed, with 41 abstentions.

The United States and Israel, which unsuccessfully lobbied against the resolution, found themselves in the company of the Marshall Islands, Micronesia, Nauru, Palau, Panama, Canada and the Czech Republic.

Surprisingly, the Europeans and other industrialised nations voted largely for Palestine.

James A. Paul, executive director of the New York-based Global Policy Forum, told IPS the resolution on Palestine is not going to solve the crisis of the Palestinian people, but it is an interesting step forward, reflecting some new thinking in foreign ministries following the recent events in Gaza.

“This is especially true in Europe, where there was a perceptible shift of position that was met with alarm in Israel,” he said.

In the end, the Palestinians garnered over two-thirds of the total votes, mostly from developing countries.

Still, non-member status for Palestine fell short of full-fledged membership in the world body, which has to be voted upon by the 15-member Security Council.

U.S. Ambassador Susan Rice reiterated Washington’s stand that it will not support any attempts to provide Palestine full membership in the world body. The U.S., a strong political, economic and military supporter of Israel, has threatened to exercise its veto if the issue comes up before the Security Council.

Rice told delegates that progress toward a just and lasting two-state solution cannot be made by pressing a green voting button in the General Assembly hall.

“Nor does passing any resolution create a state where none indeed exists or change the reality on the ground,” she said.

For this reason, she said, the vote should not be misconstrued by any as constituting eligibility for U.N. membership.

“This resolution does not establish that Palestine is a state,” she said.

Addressing the Assembly, Palestinian President Mahmoud Abbas listed the atrocities which Israel continues to commit against the Palestinians in the occupied territories.

Describing Israel’s occupation as “racist and colonial”, he said the General Assembly resolution was also the last chance for the international community to reaffirm the two-state solution: Israel and Palestine living side by side.

Just before the vote, Abbas said 65 years ago on this day, the General Assembly adopted a resolution which partitioned Palestine into two states that “became the birth certificate of Israel”.

Sixty-five years later, he said, the Assembly stands before a moral duty, which it must not hesitate to undertake and a practical duty to salvage the chances for peace which is urgent and cannot be postponed.

Paul of the Global Policy Forum noted that the new Palestinian status by itself will not by itself change a great deal. But historically when people’s seek to gain recognition of a state, they sometimes have to move by small steps towards much larger goals. This move at the U.N. should be seen in that light, he added.

Paul said the resolution opens up some interesting new possibilities for diplomatic action.

“Let us hope that the Palestinians can find the internal unity to take good advantage,” he said.

Ambassador Palitha Kohona, chair of the U.N. Special Committee on Israeli Practices, which has been critical of Israeli human rights violations in the occupied territories, told IPS that for far too long the international community’s commitment, as well as the responsibility to achieve a comprehensive peace in the Middle East, has seen little concrete results.

“Peace in the Middle-East has eluded us for far too long and it is a sad commentary on humanity that we have failed in this pressing task,” he said.

“Today, following the cessation of hostilities in the latest round of violence, we have another opportunity to escape the cycle of bitterness and reach out for peace. Let us make this an opportunity,” he added.