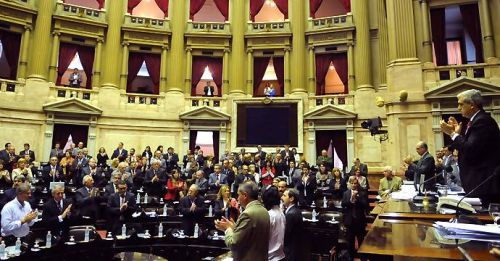 BUENOS AIRES, Nov 1 2012 (IPS) - A new law lowering the voting age from 18 to 16 expands the political rights of young people in Argentina.

President Cristina Fernández of the Frente para la Victoria, the governing centre-left faction of the Justicialista (Peronist) Party, celebrated the youth vote Thursday, which made it through the Senate two weeks ago and now the lower house, despite heated debate over the measure, which was called opportunistic, demagogic or contradictory by critics on both the left and the right.

Most of the opposition legislators walked out before the measure was put to the vote just before midnight.

Some criticised the fact that voting wouldn’t be obligatory for 16- and 17-year-olds, while other critics argued that if the age of majority is 18, political rights should not be an exception.

Opposition leaders maintained that the youth vote was aimed at winning new voters for the Frente para la Victoria, the largest faction in the Peronist party.

Young people in all of the country’s parties had pressed their leaders to support the bill, although in some cases they pointed out discrepancies.

In a conversation with IPS, Lucio Lapeña, president of the Juventud Radical, the youth group of the centrist Radical Civic Union (UCR) opposition party, said he agreed with the law that expanded the right to vote among teenagers.

He said, however, that “there are rights of young people that go beyond the vote, and that we would also like to see included in the government’s policies,” such as the right to education, to a job, or to housing.

These other rights “are not complied with, or are violated,” Lapeña said.

But he clarified that the UCR youth group urged the party leaders to back the initiative. “There was a healthy debate within the party, because we believed that the right thing to do was support the bill,” he added.

However, although some UCR lawmakers were in favour of the bill, the party’s legislators walked out before the vote, along with the representatives of other opposition parties, like the Progressive Broad Front (FAP), led by the Socialist Party.

Student leader Julieta Smulevich told IPS that her group, the leftist Libres del Sur, which belongs to FAP, backed the bill because “it expands rights and allows young people to get involved in politics.”

But she said the most pressing problems faced by her political grouping’s young support base were the difficulty in landing a first job, poverty, high school drop-out rates, drug abuse, and police brutality.

“Young people agree that the law is a positive step, but we shouldn’t support it if it is aimed at manipulating us, to just win new voters for the reelection,” she said, alluding to the government’s alleged interest in a third term for Fernández.

Although the president, who was reelected in 2011, has expressly stated that she has no interest in a third term, after stressing that it is not allowed under the constitution, some of her followers continue to talk about an eventual constitutional reform – that would require a special majority – to make it possible.

Speculation about the administration’s purported aim to expand its voter base in order to reform the constitution was voiced by several opposition legislators to justify their rejection of the law that lowered the voting age.

One of them was Elisa Carrió of the Civic Coalition, who accused the government of “demagoguery targeting the young.”

Another lawmaker opposed to the law, Soledad Martínez of the centre-right Propuesta Republicana (PRO) led by Buenos Aires Mayor Mauricio Macri, said it was “a trick” to “benefit the governing party in the polls.”

But Jorge Rivas, a member of a socialist grouping allied with Fernández’s Frente para la Victoria, rejected these arguments, pointing out that the new law would only expand the electorate by three percent.

The bill was introduced by Senators Aníbal Fernández and Elena Corregido of the Frente para la Victoria, with the stated aim of “expanding political participation…in response to a growing demand by young people.”

They noted that the voting age has already been lowered in other countries of Latin America, including Brazil, Cuba, Ecuador and Nicaragua, and has begun to be discussed in Bolivia, Chile and Uruguay.

In response to the criticism in the Senate, public hearings were held, in which professionals from different disciplines were called on to discuss whether a 16-year-old is mature and independent enough to vote.

Also asked for their opinions were student leaders in secondary schools and universities, who were almost universally in favour of the new law, while setting forth other demands.

The debate on the law coincided with a protest by secondary students in Buenos Aires, where some 50 schools were occupied for a month to protest curriculum changes.

The student protesters complained that the modifications in the curriculum introduced by the city government headed by Macri would hurt the preparation they needed for insertion in the labour market.

After a month of no classes, the judicial system called on the student leaders and representatives of the Buenos Aires Education Ministry to reach an agreement, and the modifications adopted by the government were cancelled.