An interview with Hanaa Edwar, general secretary of Iraqi Al Amal Association and head of the Iraqi Women Network. 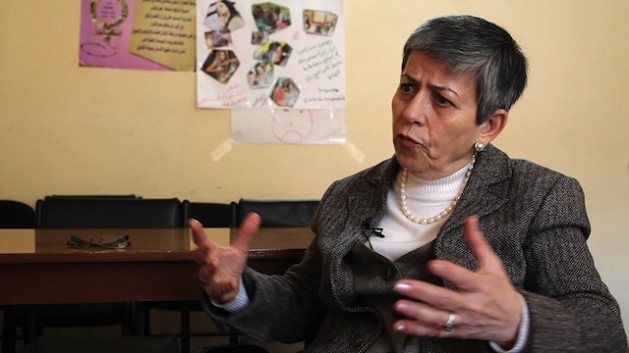 BAGHDAD, Jan 16 2013 (IPS) - From full literacy declared in the seventies, Iraq is down to 40 percent literacy for women. From the first woman prime minister and the first woman judge in the Middle East in 1959, Iraq has slipped to a place where an abnormal number of widows struggle, and where child marriages are on the rise. Hanaa Edwar is putting up a fight to win Iraqi women their freedoms again.

Q: What kind of work does your organisation do to protect women rights?

A: Through Al Amal we have been administrating the Iraqi Women Network, an office that promotes outreach amongst local women organisations by enhancing relations with many international organisations as well as involving women in different activities and training courses. One of our biggest achievements has been the Parliament quota thanks to which 25 percent of the MPs are female. Now we’re working on a new campaign in the frame of the Arab Spring to protect personal freedoms.

Q: What are the most pressing problems for Iraqi women today?

A: We represent more than 55 percent of the Iraqi population but we are buried in a society which has been exclusively drawn on male patterns. We cannot see any women leading political blocks or occupying high positions in the government. However, I would say that marginalisation of the local women is due to cultural reasons more than political.

A painful issue is that of the million and a half widows in the country left by the war. Before 2003, Iraq was already full of them but their number increased after the invasion in 2003. They live in very dire conditions and they can hardly make a living with a 100 dollars pension.

Q: Wasn’t Iraq a pioneer country in the region in social development?

A: In 1959 Iraq had the first woman minister and the first female judge in the whole Middle East. One of our biggest achievements that year was the personal status law, according to which marriages would be registered in court. Today a big number of marriage contracts are illegal, so women are left in a very fragile situation because it leads to many legal problems which also affect their children.

Speaking about children, girls are often forced to marry at the early age of 10 or 12 and, today, we even have the ‘temporary marriage’, something which has obviously been imported from Iran. Worrying cases of domestic violence crimes are on the rise amid the government’s total indifference. The government is supporting religious orthodoxy which imposes strict dress codes. Women not wearing hijab – the Islamic veil – are being discriminated against and, what is worse, girls are being brought out from schools and mothers from their jobs.

Q: Is the women quota in Parliament working as expected?

A: There is a representative share of 25 percent thanks to which there are 84 women in the Iraqi parliament. However, most of them got their seats due to their personal affinity with the leaders of the political parties, and not because of merit. It’s doubtless true that, despite the difficulties, there is still a large number of women able to hold these positions with responsibility, but most are relegated to the background.

Q: There’s also a Ministry for Women in the current Iraqi executive. Isn’t it effective either?

A: It’s called the ‘State Ministry for Women’ and there’s a draft law to change it to ‘State Ministry for Women and Family’. This speaks volumes about the role Iraqi women are supposed to play in our society. Anyhow, we are against any sort of ministry for women because we think that women issues shouldn’t be linked with one particular ministry but with society as a whole. Besides, it has very little budget. A Ministry for Women will always be linked to a political party, so what we need is a more independent commission that monitors government policies and empowers programmes to improve women’s lives.

Q: Senior NGOs have recently pointed to a dramatic increase in the number of suicides among Iraqi women. Even cases of female genital mutilation have been reported.

A: The alleged ‘suicides’ often help to hide murders, and help family members to wash the ‘honour’ of the family. And they are committed amid the biggest impunity because they are seen as ‘domestic issues’ by the judicial system. The FGM cases occur in some remote areas of Kirkuk, Suleymania and some parts of Erbil in the Kurdish Autonomous Region. About 70 percent of women have reportedly suffered this aggression in the mentioned areas but hardly any in the rest of the country.

Q: How is sectarian division affecting Iraqi women and the society as a whole?

A: This is a fabricated sectarian hatred which started in 2006 and which has been imposed and boosted from the highest levels to divide and rule through violence and fear. The lack of dialogue between the leading political parties, and the ever growing role of religion is choking our society. Many families won’t let their daughters marry somebody from another sect, and that’s something new in our society.

Q: Next spring will mark the tenth anniversary of the invasion of the country. Can we talk about any social improvement since 2003?

A: It is true that after the invasion we wiped off our isolation in the international arena as well as the taboo over free thinking. Before 2003 you simply could not talk of political pluralism, active civil organisations or any kind of contact with the outside world. But after the invasion and destruction of the country, our borders opened to terrorist groups that added to the local militias, both Shia and Sunni. We are mired in a mess where instability and the lack of security are the only constants. Today we are facing a tremendous political crisis; we have moved from a three-decades long dictatorship to a state which has no effective government.