OP-ED: The Arab Spring at Two: What Lessons Should We Learn? 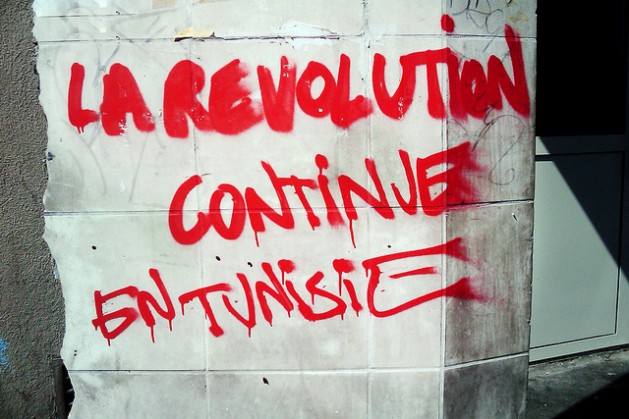 A poster in Tunis declares that the revolution must continue. Credit: Simba Russeau/IPS

WASHINGTON, Jan 4 2013 (IPS) - As the Arab Spring enters its third year, new Arab democracies and the international community should reflect on several critical lessons from the past two years.

Thinking about these lessons and learning from history, no matter how recent, could help us understand the trajectory for the next stage in Arab politics and regional stability. Some of the key issues raised in the questions below are also highlighted in “Global Trends 2030”, the recent publication of the U.S. National Intelligence Council.

Lesson 1. Domestic turbulence and the struggle for governance resulting from the toppling of dictators could take at least two to three years to abate. Washington and other Western capitals should stay out of these discussions and allow the new indigenous centres of power – Islamists and secularists – to chart a reasonable path without “advice” from the outside.

The internal debates to fill the “governance gap” are expected to be intense but largely peaceful. The euphoria that followed the precipitous fall of Mubarak, Egypt’s reputed third longest reigning dictator since Ramses II, understandably gave way to impatience and frustration about the slow pace of democratic transitions.

The heated disagreements in Egypt over the recently adopted draft constitution, as an example, should be afforded the opportunity to be reconciled through the ballot box, not by bullets. While staying out of domestic wrangling, the United States will remain a key player in the region for years to come – economically, militarily, and politically.

Relying solely on quantifiable data and Western analytic paradigms often produces inadequate analysis. The inability to anticipate the Arab Spring two years ago is a case in point.

Because many policy analysts in the West could not quantify such demands as dignity, justice, and respect, which millions of Arab youth initially voiced in their protests against their dictators in Egypt, Tunisia, Yemen, and Libya, they unfortunately dismissed them as nothing more than “Arab street” hyperbole.

These same demands are still at the heart of mass demonstrations in Bahrain and elsewhere.

Lesson 3. The emergence of Islamic politics in Egypt, Tunisia, Libya, Yemen, and elsewhere, is fueling a serious conversation about whether Islamic political parties are moderating and whether political pragmatism will in the end trump religious ideology. Arab liberals and secularists and civil rights advocates are rightly concerned about the future trajectory of political Islam and governance in Egypt and elsewhere.

The new Egyptian constitutional document seems to embody the two arguments on both sides of the religious secularist divide. It establishes the primacy of Islamic law or Shari’a in governance, but it also recognizes basic individual freedoms of speech and assembly.

The fundamental question is whether Islamic law should be the source or a source of legislation in the new Egypt and whether practicing freedoms of speech and assembly will be subject to strict interpretations of Islamic law. Human rights advocates support extricating these freedoms from state control.

The Muslim Brotherhood, however, has lost much of its legitimacy as a governing party because it has not granted ethnic and religious minorities equal access to economic and political opportunity. The MB also must recognise that Shari’a cannot be the predominant ideology in Egypt.

Over a century ago, Egyptian luminary thinkers Jamal al-Din al-Afghani, Muhammad Abdu, and Rashid Rida infused Egypt with a rich tradition of arguably liberal, reformist thought. The Muslim Brotherhood and its President Muhammad Morsi cannot hope to be accepted as the legitimate government of Egypt if they stifle this deeply ingrained reformist tradition.

Lesson 4. If Washington remains oblivious to human rights abuses in Arab countries, including those that are close allies of the United States, autocratic repression will continue unchecked. Consequently, we should expect that popular anger at the U.S. perceived hypocrisy and double standard would be directed at American interests and personnel in the region.

Violence rages in Syria, and while the world focuses on the Assad’s waning days, human rights abuses continue in other countries. Yet, the Arab Spring has resulted in democratically elected governments in four Arab countries.

The Arab Spring is a work in progress and requires the international community to remain vigilant regarding unlawful regime practices against peaceful protesters.

Many in the West are rightly concerned about the future of a post-Assad regime in Syria and the increasing carnage in that country, but the world should not lose sight of the plight of Shia communities in Bahrain, Saudi Arabia, and other Persian Gulf states.

Human rights advocates across the region are already accusing the United States of hypocrisy and a double standard because of Washington’s perceived mute response to what is happening in Bahrain.

Lesson 5. As job creation and entrepreneurship will be critical for the success of democratic transition, Arab governments will have to adopt creative economic policies to promote economic growth. Failure to do so will hinder their ability to build modern economies.

Highly focused stimulus packages and new investment, tax, and commercial laws must be passed with the aim of restricting the role of government in the economy and expanding the right of individual entrepreneurs and small business people, men and women, to pursue economic enterprises freely.

As I wrote elsewhere, the private sector is the engine that drives economic vibrancy and job creation. If the new governments can harness the power of the people by minimising regulations and enacting market place friendly laws, economic vibrancy would become possible. An employed population is the backbone of a democratic society.

Second, while the U.S. and other global powers remain involved in the Arab world, and while they are needed to help get rid of dictators, the people of the region will determine the future of their countries and the type of governance they feel comfortable with.

*Emile Nakhleh is the former director of the Political Islam Strategic Analysis Program and author of “A Necessary Engagement: Reinventing America’s Relations with the Muslim World”.