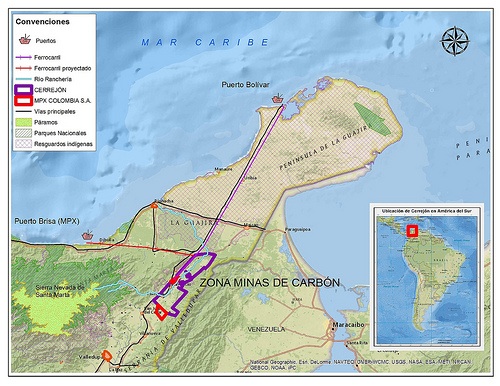 Map of La Guajira peninsula showing the Cerrejón mine, the railroad tracks and Puerto Bolívar. On the left is the Sierra Nevada de Santa Marta mountains and on the right, Venezuela. Credit: Felipe Osorio/IPS

BOGOTA, Feb 23 2013 (IPS) - Two weeks into an indefinite strike called by workers at Cerrejón, one of the largest open-pit coal mines in the world, the company has agreed to sit down again and negotiate with Colombia’s National Union of Coal Industry Workers (Sintracarbón).

Negotiations, which had been broken off by Carbones del Cerrejón on Sunday, Feb. 17, are back on track with tentative meetings between company representatives and leaders of Sintracarbón, an affiliate of IndustriALL, a global trade union organisation that represents 50 million workers in a 140 countries in the mining, energy and manufacturing sectors.

Representatives of both sides met in the afternoon of Feb 22 to “discuss the methodology for resuming negotiations,” Sintracarbón president Igor Díaz announced on Twitter.

The decision by Carbones del Cerrejón — a joint venture between the multinational corporations Anglo American, BHP Billiton and Xstrata — to return to the negotiating table was most likely influenced by a change in attitude on the part of the Colombian government, who stepped in to play a role as mediator in this conflict.

In a laconic text message late on Wednesday, Feb. 20, Labour Vice-Minister José Noé Ríos told IPS: “We’re moving ahead. We’re still looking for a way (to solve the conflict) and overcoming the mutual distrust” between the parties.

The following day, Ríos was able to bring two representatives from both sides together to discuss the conditions for reopening negotiations.

A leader of the governing Liberal Party and former peace commissioner, Ríos is an experienced negotiator and in this opportunity he was called on to mediate by Sintracarbón.

Nobody, however, can accuse the vice-minister of “helping” the union, a Sintracarbón advisor told IPS. The source spoke to IPS on condition of anonymity and not as an official spokesperson for the union.

All things considered, after a week of efforts, Ríos’ mediation seems to be yielding results.

Another factor that probably played a role in the company’s change of heart was a social protest demanding a resumption of negotiations, staged on Feb. 21 in the northeastern department of La Guajira, whose economy revolves around the Cerrejón pit and its 9,870 workers.

The protest was initially called by local merchants as a measure apparently against the union, but it was taken up by the population who turned it around. And not just because the demand for dialogue coincides with Sintracarbón’s position.

Carbones del Cerrejón — and with it Guajira politicians and the government — came out of the civic strike looking badly in the eyes of the public, according to the union advisor interviewed by IPS.

During the strike, a usually silent population demonstrated loudly in front of closed stores and businesses, protesting the lack of a healthcare system in La Guajira and the missing royalties paid by Cerrejón to the government, allegedly misappropriated by corrupt local politicians.

The company operates in the area since 1983, mining high-quality thermal coal, but only 10 percent of its purchases and contracts are conducted in Colombia, and less than one percent in La Guajira, the country’s fifth poorest department.

Carbones del Cerrejón established four foundations, with different purposes: strengthening government and accountability in La Guajira; promoting the construction of aqueducts and sanitation works; expanding micro-businesses; and fostering the sustainable development of the Wayuu indigenous people, who represent 42 percent of the Guajira population.

These foundations are financed with the company’s “tax deductions”, Álvaro Pardo, head of the extractive economy analysis centre Colombia Punto Medio, told IPS, and “the work they do has little impact, as is evident from the unsatisfied basic needs index and the alcoholism and illiteracy rates” in La Guajira.

According to his calculations, the almost five million dollars provided by Cerrejón from 1982 to 2002 in compensation to the Wayuu communities, are the equivalent of two and a half days of the company’s coal production.

The Red por la Justicia Tributaria en Colombia, an organisation of Colombian academics and activists who advocate for a fair tax system, mining companies deduct royalties and manipulate prices to lower the sums they are required to pay the government.

The company’s willingness to find a prompt solution seemed in doubt on Feb. 19 when Carbones del Cerrejón’s marketer, Coal Marketing Company (CMC), which exports 90,000 tonnes of coal per day, declared “force majeure” to get out of paying daily fines for not meeting supply contracts.

CMC had 15 shipments scheduled for Turkey and Europe between Feb. 7 –when Sintracarbón called the strike– and Feb. 18.

Force majeure can be invoked in extreme situations, such as natural disasters and strikes. On its website’s home page CMC proudly, and somewhat belatedly, announces: “We have never declared Force Majeure.”

Union records show that from 1986 to date Carbones del Cerrejón and Sintracarbón signed 12 collective bargaining agreements. This is the first work stoppage in the mine in 18 years.

In September 1995, nine workers were fired after a five-day strike called to protest against the quality of the food served by the company’s canteen.

In 1996, Gustavo Palmezano, a unionist who had participated in another Sintracarbón protest against two layoffs, was murdered. Half of the trade unionists murdered in the world over the last four decades were Colombian.

Díaz and another Sintracarbón negotiator have received repeated threats against them and their families since the list of demands was submitted in late November.

Carbones del Cerrejón condemned the threats, backed Sintracarbón when it reported them to the police, and urged the government to grant adequate protection to the unionists and their families.

According to data from Germany’s Federal Institute for Geosciences and Natural Resources, 30.3 percent of the world’s energy today comes from coal, the dirtiest of fossil fuels, whose gas emissions are a leading source of global warming.

With coasts on two oceans and very vulnerable to climate change, Colombia is the world’s fifth coal exporter.

Although in 2011, global coal consumption was up 5.4 percent from 2010, as per information from British Petroleum’s Statistical Review of World Energy, other power sources also increased, pushing international coal prices down.

The 2010-2014 National Development Plan projected an annual production of 124 million tonnes, at prices higher than today’s.

In 2012, 89.2 million tonnes of coal were extracted in Colombia, according to data from the Ministry of Mining and Energy.

In its conflict with Sintracarbón, Carbones del Cerrejón has claimed that prices have dropped 35 percent in the last two years.

The illusion of a development driven by the “mining locomotive”, as President Juan Manuel Santos likes to call it, crashes head on with the government’s weak enforcement of what are already lax regulations.

More than 90 percent of Colombia’s coal comes from fields mined by foreign companies. Carbones del Cerrejón is the single largest producer, with 38 percent.

The company’s operations extend over 800 square kilometres in the Guajira peninsula, bordering with Venezuela. It has its own railway lines running through the isthmus to Puerto Bolívar, a private port on the Caribbean sea which is used exclusively by Carbones del Cerrejón and CMC.

The company reported that in 2012 it exported five percent of global coal production: 32.8 million tonnes. This volume determines the amount of royalties the company must pay the government for extracting non-renewable resources. But the government does not control the volumes actually exported by large mining companies.

Sintracarbón is asking for an eight percent raise in wages — most Colombian workers received a four percent increase in average — and the company is offering five percent.

Carbones del Cerrejón says it agreed to a raise that doubles last year’s inflation and a bonus of 7,250 for each worker, in addition to “maintaining and improving all the benefits enjoyed by workers.”

While the company’s machinery, technology and productivity are on a par with U.S. and European companies, Cerrejón miners are paid five times less than their peers in the North, according to Colombia Punto Medio and other sources.

“Prices have dropped, but the enormous profits of the mining companies have not shrunk. They’re selling coal at about 60 dollars a tonne, but in 2001-2002 coal was 35 dollars a tonne and it was still profitable,” Pardo said.

The vice-president of Sintracarbón, Jairo Quiroz, believes Carbones del Cerrejón is trying to bring down the cost of production per tonne by cutting labour costs.

“That’s what they’re aiming for in this negotiation. Which is why they’re putting up less economic resources to respond to the workers’ list of demands,” Quiroz told IPS.