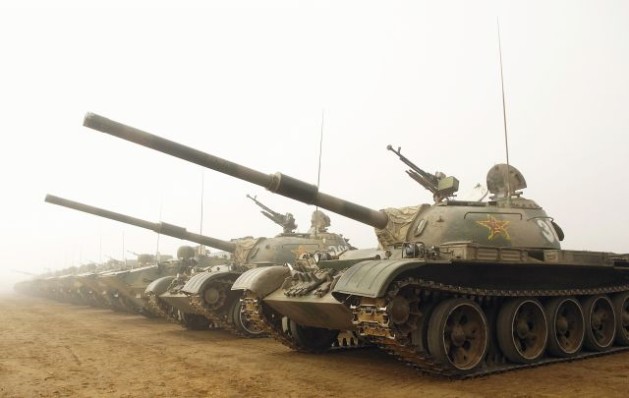 Chinese tanks in formation at Shenyang training base in China. Credit: public domain

UNITED NATIONS, Mar 18 2013 (IPS) - After ranking ahead of Japan as the world’s second largest economy, China has reached another milestone: displacing the UK as the world’s fifth largest arms supplier.

In a new study released Monday, the Stockholm International Peace Research Institute (SIPRI) said, “This is the first time China has been in the top five arms exporters since the end of the Cold War (in 1992).”

Asked how Chinese arms compare with some of the more sophisticated Western weapons systems, Dr. Paul Holtom, senior researcher and director of the Arms Transfers Programme at SIPRI, told IPS, “It is perhaps also more pertinent to ask how Chinese weapons for export compare to those being offered by Russia, Ukraine etc. as it is with these suppliers that China is likely to be a rival in the short-to medium-term.”

China’s rise has been driven primarily by large-scale arms acquisitions by Pakistan, a country once described by a Chinese delegate as “our Israel”.

The United States is currently the largest supplier of weapons to Israel, a longtime political, economic and military ally, which is heavily protected against any forms of sanctions in the Security Council.

This is the first time that the UK has not been in the top five since at least 1950, the earliest year covered by SIPRI data.

Overall, the volume of international transfers of major conventional weapons grew by 17 percent between 2003-2007 and between 2008-12, according to the study.

Traditionally, the world’s five major arms exporters have been the five permanent members of the Security Council, the only U.N. body with the power to declare war and peace.

Germany, currently the third largest arms supplier, is a not a permanent member of the Security Council, but the UK is.

Besides being an exporter, China was also a key arms importer during the period 2008-12

Asia and Oceania accounted for almost half (47 percent) of global imports of major conventional weapons.

These sales come at a time of heightening tensions over territorial disputes in the East and South China seas.

Asked if most developing countries were attracted to Chinese weapons due to discounted prices, or due to the fact that Beijing does not lay down political conditions, including human rights standards, Holtom told IPS it is difficult to definitively say what the main attraction is.

Cost and also the terms of the arrangements – e.g. long-term low interest loans, barter etc. – will obviously be an important element in procurement considerations, he pointed out.

The issue of “security of supply” could also be a factor.

From the perspective of some analysts in Moscow, for example, the decision to include S-300 SAM systems in the scope of the Russian arms embargo on Iran damaged Russia’s reputation with regards to a “secure source of arms supplies” and there is a fear that China will be a beneficiary of this.

Holtom said Wikileaks, the online organisation known to publish classified documents, indicates that Chinese companies are also sensitive to issues of human rights concerns and pressure from the United States.

“But it is likely to still be regarded as a ‘secure source of arms supplies’ compared with some of the other major suppliers that assess arms export against a wider range of criteria than China – e.g. European Union member states apply the eight criteria of the EU Common Position relating to serious violations of human rights and international humanitarian law, impact on conflict and instability and diversion risks,” he said.

Holtom also pointed out there have been very significant developments with regards to the Chinese arms industry since the reforms of the late 1990s.

The items that feature in SIPRI data on deliveries remain low-cost and dated systems, such as the F-7 combat aircraft.

However, the JF-17/FC-1 has been developed and delivered to Pakistan and this has been an important factor for China’s rise in the SIPRI statistics and there is interest from a number of states.

Like the J-10 combat aircraft, these items contain Russian components that could come into play with regards to export prospects and competition.

With regards to battle tanks, armoured vehicles, artillery, frigates, anti-ship missiles and Man Portable Air Defence Systems (MANPADS), China has secured some clients that are perhaps attracted by the lower costs of these items and anecdotally there are comments that both the equipment, terms of the deals and training are improving.