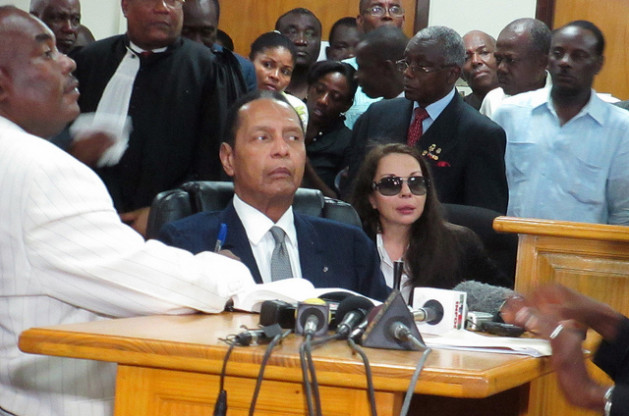 Jean-Claude “Baby Doc” Duvalier at his Feb. 28, 2013 hearing. The sweltering courtroom was packed with over a dozen victims of the regime and with local and foreign journalists, lawyers and representatives of human rights groups. Credit: Milo Milfort/IPS

PORT-AU-PRINCE, Mar 1 2013 (IPS) - For the first time ever, on Thursday Haiti’s former dictator faced his accusers, answering questions about corruption and human rights abuses during his brutal 15-year regime (1971-1986).

The court of appeals hearing was part of a process that will determine if Jean-Claude “Baby Doc” Duvalier is to be indicted on rights abuses.

“We think that this is a wonderful day for justice in Haiti,” rights attorney Nicole Phillips of the Washington-based Institute for Justice & Democracy in Haiti (IJDH), told IPS. “For the first time… and despite the efforts of his attorneys, Jean-Claude Duvalier came to court.”

The ex-dictator showed up on Feb. 28 only after first disregarding three previous orders.

The sweltering courtroom was packed with over a dozen victims of the regime and with local and foreign journalists, lawyers and representatives of human rights groups.

After his lawyers failed to convince judges to hold a closed session, for four hours the sickly looking 61-year-old, dripping with perspiration, answered judges’ questions and accusations, whispering his evasive and oft-flippant denials to the clerk who read them aloud.

A group of aging supporters of the 29-year (1957-1986) regime of “Baby Doc” and his father François “Papa Doc” Duvalier applauded the former despot’s more irreverent answers.

When Judge Jean-Joseph Lebrun asked Duvalier about murders and executions during his rule, the ex-dictator responded: “All countries have murder.”

“Were there political prisoners in Fort Dimanche?” the judge asked about the prison known as “Haiti’s Auschwitz,” where an estimated 3,000 prisoners were executed or died of hunger and disease.

“Fort Dimanche was full of all kinds of delinquents,” Duvalier replied.

At one point Duvalier even claimed, “In every domain, I have a good record” and even tried to turn the tables.

“Everything was going well when I was here. When I came back [in 2011], I found a broken and corrupt country. I should ask you, what have you done with my country?” he asked.

Human Rights Watch estimates that between 20,000 and 30,000 people were killed during the reigns of “Baby Doc” and his father. Rights groups also documented torture, rapes, forced exiles and forced disappearances during both regimes.

Among those seated in the space reserved for victims was Robert “Boby” Duval, a former Fort Dimanche prisoner.

When asked by judges, Duvalier claimed Duval had been arrested for “subversive activities” and “weapons possession,” saying the then-young businessman had been “well-treated” in prison.

“A member of his family brought him food three times a day,” Duvalier maintained.

“I didn’t have any weapons,” a visibly angry Duval later told IPS. “He told a lot of lies about me.”

“He sent me to Fort Dimanche, forcing me to drop to 90 pounds,” continued the now burly ex-soccer player, who spent 17 months in prison in 1975 and 1976, eight of them in Fort Dimanche. “They gave us 300 calories a day… They jammed 40 people into a four-by-four meter cell. Two or three people died every day.”

Asked if he still had money in foreign accounts, Duvalier replied “no,” even though at least four million dollars is in a frozen Swiss account.

While life in much of the country proceeded much as usual on Thursday, outside the makeshift courthouse, several dozen aging Duvalier supporters dressed in red and black – the colors of the former regime – chanted “Long live Duvalier!” and “Duvalier, this is your country, do whatever you want!”

On the radios, and online, Haitians and Haiti-watchers stayed abreast of the proceedings through Tweets, photos and videos sent out by journalists, lawyers and human rights advocates.

Haitian journalist Rachèle Magloire sent out quotations every minute or so, at one point tweeting out that Duvalier said, “I am the son of a great nationalist. If it weren’t for me, the country would have fallen into civil war.” Another journalist tweeted from the room: “Duvalier supporters clamouring” while a correspondent abroad noted: “Extraordinary day in #Haiti.”

The hearing ended at about 3:30 pm and is to be continued on Mar. 7, when victims like Duval and others are expected to testify.

Thursday’s session is part of an appeal by regime victims who filed a complaint against the former dictator in 2011 for crimes against humanity. In January 2012, a judge rejected the charges, citing Haiti’s 10-year statute of limitations on murder as one reason. The ruling was condemned by local and international rights groups, and by the U.N. High Commissioner for Human Rights.

The Bureau of International Lawyers (Bureau des Avocats Internationaux – BAI), one of the groups representing the victims, noted that the Inter-American Commission on Human Rights, Amnesty International, and Human Rights Watch all say the abuses under Duvalier’s rule constitute crimes against humanity.

“These crimes cannot be barred by any statute of limitations pursuant to international law that is binding on Haiti. As a matter of law, the Court of Appeals must grant the victims’ appeal and allow Duvalier to stand trial for his both his political violence and fraud crimes,” BAI attorney Mario Joseph said in a statement on Thursday following the hearing. “Given the events today, we are hopeful this court will issue a fair decision.”