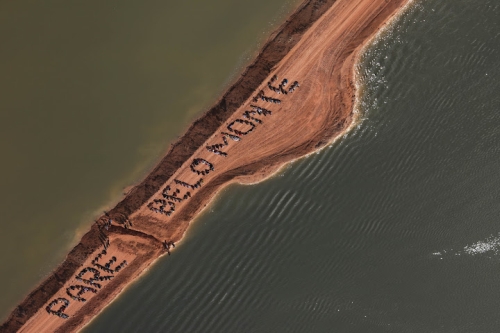 Native people protesting against the Belo Monte dam, a project that created a rift between Brazil and the IACHR. Credit: Atossa Soltani

PORTO ALEGRE, Brazil , Mar 1 2013 (IPS) - March will be a key month for defining the future of the Inter-American human rights system, which has come under fire from a number of countries in the region.

Mar. 22 is the deadline for members of the Organisation of American States (OAS) to present proposals for reforming the regional justice system created in 1948 with the purpose of promoting and protecting the basic rights enshrined in the American Declaration of the Rights and Duties of Man and the Universal Declaration of Human Rights.

Its main function is to oversee compliance with the American Convention on Human Rights, adopted in 1969.

The government of Ecuador made the first reform proposal, and is also leading an effort to create a parallel system of justice in the framework of the Union of South American Nations (UNASUR), which has, however, not yet materialised.

The debate on reforms was launched in June 2011 with the creation of a working group within the OAS. Since then forums, public hearings and on-line consultations have been held to study different recommendations.

The chief proposals would restrict the IACHR’s power to impose precautionary measures (the adoption of urgent measures to protect individuals or groups from irreparable harm), curtail detailed analysis of countries with mass human rights abuses and limit the powers of the special rapporteurs, such as the rapporteur for freedom of expression.

The Commission has political functions – carrying out specific visits and issuing recommendations and reports – and quasi judicial ones: receiving complaints from organisations or private individuals, determining whether they are admissible, requesting precautionary measures by the relevant states and taking cases to the Inter-American Court.

The Court’s functions are litigation, consultation and the adoption of precautionary measures. Its rulings are final and are not subject to appeal.

Brazil’s relations with the Commission soured in April 2011, when the IACHR called, as a precautionary measure, for the immediate suspension of the permit for the construction of the Belo Monte hydroelectric dam on the Xingú river in the Amazon rainforest, to protect the health of native communities affected by the works.

The Brazilian government rejected the request. But the Brazilian position was misinterpreted, according to the Foreign Ministry’s human rights division, which instructed a representative to reply to IPS’s enquiries on condition of anonymity.

Brazil was already in the process of meeting the Commission’s demands, in response to requests from national oversight agencies, and the country’s support for reform of the IACHR was not triggered by the ruling, the diplomatic source said.

In any event, the Brazilian government withdrew its ambassador from the OAS, as well as its candidate to sit on the IAHCR board of officers. March is the deadline for countries to nominate candidates and, according to the Foreign Ministry’s human rights division, by mid-February no decision had been taken by Brazil in this respect.

“Proposals for reform are being presented just when the Commission and the Court are complying with their obligations under the Convention,” said activist Jair Krischke, the head of the Movement for Justice and Human Rights (MJDH), based in the southern Brazilian city of Porto Alegre.

According to Krischke, the stance taken by Brazil was not only prompted by the ruling on Belo Monte, but also by a 2010 Inter-American Court verdict ordering the handing over of the remains of people who were forcibly disappeared in the 1972-1975 military action against the Araguaia guerrillas and the payment of reparations to the victims’ families.

The government maintains it has already paid compensation, but it has not done so for moral damages, as the Court ordered, Krischke told IPS.

When a similar verdict was issued against Uruguay, “the government held a ceremony in parliament, attended by the president, and apologised for the forced disappearances (committed during the 1973-1985 dictatorship). Brazil did not even publish the Court sentence,” he said.

“When a sovereign state forms part of a regional system, it is precisely in order to hear criticism and receive recommendations or condemnations,” she told IPS.

The governments of Bolivia, Colombia, Ecuador, Peru and Venezuela are active in this campaign because the inter-American justice system has touched on crucial aspects of their presidents’ agendas, de Freitas said.

“When the Inter-American system accepts an opposition politician in Venezuela as a candidate, or when it asks for respect for the rights of journalists of a newspaper in conflict with the president of Ecuador, it touches on issues that are personal for the presidents. That is also what happened with Belo Monte and Brazilian President Dilma Rousseff,” she said.

The stance taken by Ecuador coincides with uncomfortable decisions about domestic questions, said Mario Melo, a professor of human rights at the Simón Bolívar Andean University and the lawyer representing the Sarayaku people versus the Ecuadorean state in their case before the Court.

In June 2012, the Court ruled that the government of Ecuador had violated the rights of this native community by failing to consult them about the encroachment of an oil company on their lands in the early 2000s.

“It’s a delicate issue for the government because of its policy of expanding the oil frontier in indigenous territories,” Melo said.

Since the 1970s and 1980s, the Commission has been a forum for victims of abuses who have exhausted domestic legal remedies, or who find themselves facing unjustified delays in the national judicial system.

Camila Asano, the foreign policy coordinator for Conectas Direitos Humanos, an NGO with consultative status at the United Nations, recalled that crucial issues in Brazil, like slave labour and gender-based violence, had to be addressed by the IACHR before they became visible.

But the legal process is slow – one of the criticisms levelled at the inter-American justice system. Sometimes there is no time to wait for a decision, and that is why the precautionary measures are needed, Asano said.

Ecuador wants to eliminate the Commission’s power to impose precautionary measures, leaving that authority to the Court.

Brazil – where the Commission has repeatedly ordered precautionary measures to protect activists, journalists, landless rural workers and prison inmates – recognises the competence of the Commission, but has suggested changes that would make the procedures more rigorous and complicated.

The Brazilian proposal, according to the Foreign Ministry’s representative, is that the Commission should sharpen up the arguments justifying its decisions in cases like Belo Monte, and put more emphasis on the promotion of human rights.

“They should not only judge and punish violations, but rather develop measures that prevent them from being committed again,” the source said.

Other criticism is more worrisome, such as questions about whether the Commission is competent to produce annual reports on countries that merit special attention. Country delegates allege that these reports should not single out specific states, but should focus on all the members of the OAS system.

The fact that the United States and Canada have not ratified the American Convention, yet contribute to funding the special rapporteur on freedom of expression, has also annoyed a number of countries.

One of the proposals is that donations should not be earmarked for a particular rapporteurship.

Brazil is calling for more transparent management, and for resources to be distributed from the OAS ordinary fund, without excluding the possibility of receiving donations from international foundations and development banks.

“A large proportion of the proposed improvements have not been implemented because of a lack of resources,” said Asano. Her human rights group considers that, as an economic powerhouse, Brazil should set an example and increase its contributions.

According to the diplomatic source, this country made its last contribution in 2008. “In 2010, management of funds was redirected from Itamaraty (the Foreign Ministry) to the Planning Ministry. This year we asked for 800,000 dollars, but the request was not approved due to a budgetary shortfall,” the source said.

“In the last few years we have tightened our belts when it comes to expenditure, and no contributions were made. I wouldn’t say it was for political reasons; perhaps there really was no money,” the source added.

Professor Melo believes that after the discussions are over, the most radical reforms will not be approved. “Everyone knows that weakening the Inter-American system would only strengthen the authoritarian use of power,” he said.

In de Freitas’s view, “to renounce this dimension of control, as Venezuela did, is to mortgage future generations. Obviously, a regional rights protection system does not solve the problems, but in many cases it can shed light on the abuses.”