RIO DE JANEIRO, Apr 9 2011 (IPS) - The Xingu river flows around small isles and islands and across rapids and waterfalls in Brazil’s Amazon jungle, and has a dramatically reduced flow during dry season. Navigating it presents constant hurdles and risks. 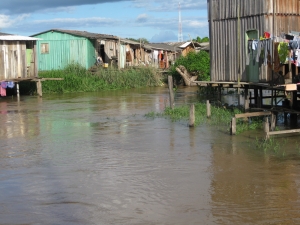 A poor neighbourhood in Altamira, Brazil that floods during high season will be left permanently under water by the Belo Monte dam. Credit: Mario Osava/IPS

The project to build the Belo Monte hydroelectric dam along the Xingu in the northern state of Pará, in the eastern part of the rainforest, is facing a similar variety of obstacles.

The opposition is not limited to the usual complaints by local environmentalists and social activists. A noisy coalition is taking shape, and energy experts are also questioning Belo Monte’s economic viability and the magnitude of the benefits it will provide.

The Inter-American Commission on Human Rights (IACHR) recently urged the Brazilian government to “stop the licensing and construction of the Belo Monte Dam project” to protect the rights of local indigenous communities that will suffer the effects of the dam.

On Apr. 1, the IACHR granted precautionary measures for the indigenous communities, in response to a petition filed by 40 Brazilian NGOs in November.

The IACHR asked the Brazilian government to undertake a “free, prior, informed, of good faith and culturally appropriate” consultation process with the indigenous communities; grant them access to the social and environmental impact study, translated into native languages; and adopt “vigorous and comprehensive measures” to protect the “lives and personal integrity” of isolated indigenous peoples in the Xingu river basin threatened by the dam, including effective measures to prevent the spread of disease by the influx of outsiders.

The government of Dilma Rousseff announced that it would not heed the IACHR request. On Thursday, Defence Minister Nelson Jobim said the request to halt construction on the dam “will be returned just as it was received…without processing.”

Former U.S. president Bill Clinton (1993-2001) spoke out in defence of indigenous rights and biodiversity and suggested alternatives to hydropower dams in the Amazon, when he addressed the Mar. 26 Global Forum on Sustainability in Manaus, the capital of the northern Brazilian state of Amazonas.

Oscar-winning Canadian filmmaker James Cameron, director of the blockbuster “Avatar”, has become a champion of the campaign against the Belo Monte dam.

In March, he visited indigenous communities in the Xingu river basin for the third time, accompanied by actor and former California governor Arnold Schwarzenegger, who did not speak out against hydroelectricity but praised alternative energy sources. They visited the Big Bend region of the Xingu river, the site of the proposed dam, before taking part in the Global Forum on Sustainability.

The controversy over the dam, which will be the third biggest in the world, is eroding Brazil’s image abroad.

But while opponents have tried for years to block the project by means of legal challenges and other initiatives, many see it as a fait accompli, since the dam already obtained a provisional environmental permit that allowed the auction to go ahead on Apr. 20, 2010. The contract was awarded to a consortium led by Brazilian state-owned power companies.

Nevertheless, the prosecution service still has a number of lawsuits pending against the licencing and tendering processes, which according to public prosecutor Felicio Pontes were illegal, among other reasons because the rights of indigenous people were not respected, such as the right to free, prior and informed consent as established by International Labour Organisation (ILO) Convention 169 concerning Indigenous and Tribal Peoples, to which Brazil is a signatory.

Infrastructure work on the dam officially began a month ago, starting with the clearing of 238 hectares of rainforest and the construction of access roads.

In order for the work to begin, Brazil’s environment institute, IBAMA, granted a “partial installation licence” – which does not exist in the country’s environmental legislation.

Before breaking ground, the 18-company consortium that won the contract was ordered to meet 40 conditions, under the provisional environmental permit it was awarded in early 2010.

But prosecutors and environmentalists point out that the requisites have not been fulfilled, including basic sanitation and other conditions making it possible for nearby cities to receive as many as 100,000 outsiders – construction workers and people looking for jobs – without suffering health epidemics or the collapse of existing services.

The irregularities have piled up, triggering the resignation of several high-level IBAMA officials, and making Belo Monte vulnerable to legal action.

But based on past experience in Brazil, initial setbacks caused by challenges from prosecutors like Pontes end up being overcome by rulings by appeals or higher courts.

It is the economic aspects that are decisive in such cases. Belo Monte will have a capacity to generate 11,233 MW, which planners say is necessary to sustain the annual GDP growth of four to five percent that is projected for years to come.

But power generation will average just 40 percent of that potential because during the dry season in the Amazon, the Xingu river’s flow drops to just 1,000 cubic meters per second, compared to 20,000 or even 30,000 during the rainy season.

And the dry season, which typically runs from June to November, could last even longer and become more intense as a result of climate change, experts predict.

With the technique selected for the project, a “run-of-river” or “streaming hydro” system, the river continues to run instead of being held back by a large dam, as with the traditional reservoir system.

But using the run-of-river technique will aggravate a negative aspect of the power supply system in Brazil, which depends on hydroelectricity for 80 percent of domestic energy consumption. During the dry season, the country’s coal, oil and natural gas-fired thermal power stations are relied on to ensure electricity supplies, leading to a “dirtier” energy mix and driving up the cost of electricity.

The new turbines that will be used at Belo Monte do not require a huge reservoir, as needed in the past.

An earlier version of the dam, known as Kararao in the 1980s, would have flooded 1,220 square kilometres of land. But the area to be flooded has been reduced to 516 square kilometres, with the hope of neutralising pressure from environmentalists and preventing the flooding of protected indigenous land.

However, the smaller reservoir and run-of-river technique mean Belo Monte would have little to no capacity for energy storage, to meet demand during the low water season.

But the country’s energy authorities argue that by operating at peak capacity during the rainy months, Belo Monte will make it possible to save water in other reservoirs, ensuring hydropower supplies for a longer period of time.

Nevertheless, in the face of the controversy surrounding the Belo Monte dam, some energy experts have begun to defend the larger reservoirs created by traditional dams, ignoring environmental and indigenous pressures, as a solution to Brazil’s growing demand for energy.

They also argue that the dam and power plant will cost at least 50 percent more than the projected price tag of 12 billion dollars.

The mega-project will also include the diversion of most of the river’s flow in two channels that will entail the removal of a similar amount of earth and rocks as in the construction of the Panama canal, according to environmentalists.

The diversion channels will reduce the flow along a 100-km curving stretch of the Xingu river known as the Big Bend. That will hurt biodiversity and fishing, affecting the living conditions and transportation of two indigenous groups made up of over 200 people, and of riverbank communities, ecologists, biologists and even the environmental impact study agree.

But Brazil’s energy and environmental authorities claim the indigenous people will not suffer “direct impacts.” The aim of such assertions is to avoid more complex legal hurdles arising from the constitutional protection enjoyed by the country’s native people.

Meanwhile, the controversy rages on, in Brazil and abroad.