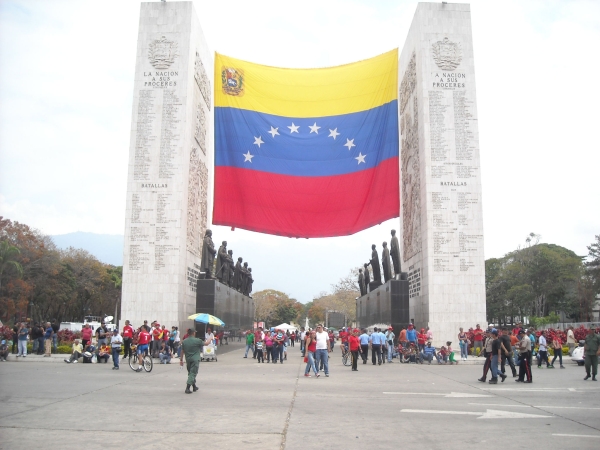 Hundreds walk in Paseo de los Próceres in Caracas on Mar. 10 to pay their respects to the late Hugo Chávez in the funeral chapel. Credit:Raúl Límaco/IPS

SAN JOSE, Mar 15 2013 (IPS) - Although there is plenty of speculation about what will happen now President Hugo Chávez is gone, the likelihood of change in Venezuelan politics and society is low.

To gauge the significance of the upcoming elections, to be held on Apr. 14, the results of the last three presidential elections over the past 12 years must be analysed. The electorate’s vote in favour of Chávez was a constant factor while the opposition’s performance was uneven.

The best result for Chávez was in 2006, when he garnered 62.8 percent of the vote against 36.9 percent for the opposition. Six years earlier, Chávez took a slightly lower proportion of the vote: 59.8 percent, while the opposition’s figure was similar to the 2006 tally, at 37.5 percent.

In 2012 Chávez won again, but this time his proportion of the vote fell by four percentage points with respect to the result in 2000, to 55.1 percent, while the opposition vote grew by eight points, to 44.3 percent. In all three elections the number of invalid votes was insignificant, and in 2012 it was less than two percent.

Analysed over time, these results reveal at least three trends.

In the first place, the electoral advantage of the government forces is a historical constant. The narrowest margin over the opposition was 11 percent, huge in political terms, while the widest was a whopping 36 percent. The results of the upcoming elections could lie between these two figures, if there is no major change in the trends.

A second inference that can be made is the high level of politicisation of Venezuelan society, reflected in the high turnout at elections and the low numbers of sceptics who have made their point with blank or spoiled ballot papers.

A third trend is the way voters are lined up for and against Chávez, with three different main opposition candidates, who were however strong enough to obliterate minor candidates.

With these facts, we can ask ourselves whether an event of such magnitude as the death of the Venezuelan president can alter the electoral scenario and the trends that have been consolidated over the last 12 years, and the answer is that this appears unlikely, for several reasons.

In first place, the polarisation of society must be reckoned with. In Venezuela there have only been two political positions: for or against Chávez, who managed to maintain his support base throughout his administration.

Chávez’s personality was so strong that the opposition, originally heterogeneous and with an ideological spectrum ranging through almost all possible positions from left to right, united in order to act as a suitable counterweight, whatever its members’ views on development and the economy.

Chavismo was also made up of different positions that came together around the figure of the president himself. Both government and opposition forces have kept to stable positions, and that stability appears likely to continue after the forthcoming elections.

In second place, the electoral spectrum cannot have varied greatly since the last election (in October 2012). Turnout and voter intentions will probably be quite similar. The government candidate (acting president Nicolás Maduro) is different, but the vote for Chávez has been consistent, and in addition, regional elections in Venezuela have amply proved that votes for the presidential candidate are, in fact, transferred to other candidates close to the president.

The government candidate will appeal to the memory of the deceased president and will legitimately present himself as the person who represents continuity. There are plenty of reasons for this argument, including his close ties (as vice president) to the administration, as well as the fact that Chávez himself explicitly urged people to vote for him.

The opposition has no other choice than to remain the opposition, although this may sound like a tautology. In other words, in terms of images there is also a stability about the Venezuelan election campaign: the political actors are the same, and their discourse has not changed.

Finally, the resources available to both candidates, their advertising potential, territorial organisation and electoral dynamics have not changed either. These aspects of their positions – asymmetrical or not – remain unaltered.

All this leads to the supposition that a reversal of the trends, and of the way Venezuelan politics has been organised for over 10 years, is highly unlikely.

Neither is the continuity in the political sphere going to change dramatically when it comes to Venezuela’s public policies and international agenda.

It should be remembered that the present government team in Venezuela has been working together, making large and small decisions for at least the time during which the president was critically ill.

Clearly, the most urgent item on the agenda is the economy, which needs to stabilise its resources in order to maintain the government’s set of social programmes and public works.

In the international arena, there is probably no reason for altering the recent Venezuelan position of adhering to and promoting multilateral organisations.

Caracas will continue to support the Union of South American Nations (UNASUR) and the Community of Latin American and Caribbean States (CELAC), and will maintain its commitment to the Bolivarian Alliance of the Peoples of Our America (ALBA), a strategic bloc in which it has a central position.

In other words, the passing of Chávez, while an event of historical significance for Venezuela and Latin America, will apparently not bring about short-term changes in domestic policy, nor in the traditions and behaviours exhibited by Caracas on the international scene.

The stability of this scenario will clearly be an advantage for the rest of the countries in the hemisphere.

* Adrián Bonilla is secretary general of the Latin American Faculty of Social Sciences (FLACSO) and has a doctorate in international relations from the University of Miami.