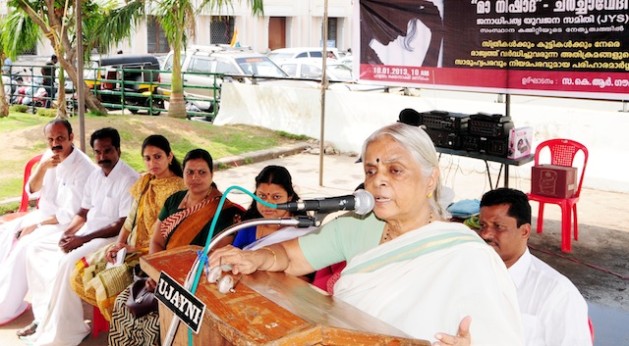 The well known poetess Sugathakumari speaks at a meeting about sexual violence against women in Thiruvananthapuram. Credit: K.S. Harikrishnan/IPS

THIRUVANANTHAPURAM, India , Mar 28 2013 (IPS) - Shaken by the brutal gang rape and murder of a young woman in the national capital New Delhi last December, the female workforce in India is calling for more concrete measures for the protection of female employees from both physical and non-physical attacks.

Although the Union Government has passed a bill in Parliament to protect female employees from sexual harassment in the workplace, women are demanding long-term measures to implement the law and punish the guilty.

A survey report by the Associated Chambers of Commerce and Industry of India revealed that the rape case in Delhi, and the national outrage that followed, shook the confidence of the female workforce, not only in Delhi but also in other major cities like Chennai, Bangalore, Mumbai, Hyderabad, Pune, Ahmadabad, Lucknow, Jaipur and Dehradun.

In February, the Indian Parliament approved a new law to prevent sexual harassment of women in the workplace and provide protection to women in both the government and private sectors.

According to the new legislation anyone who makes physical contact, sexual advances, requests for sexual favours, sexual remarks or shows pornography will be treated as the accused in any ensuing case.

Krishna Tirath, the minister of state for women and child development, told the lower house of parliament that elected representatives and society itself would have to implement the law for the protection of women in offices and companies.

Still, the practice continues throughout the country. Studies and surveys have found that incidents of sexual harassment were high both in the government and the private sector.

A survey entitled ‘Sexual Harassment at Workplaces in India 2011-2012’ conducted in Delhi, Mumbai, Bangalore, Chennai, Kolkata, Ahmadabad, Lucknow and Durgapur, jointly released by Oxfam India and the Social and Rural Research Institute (SRI), said 17 percent of 400 respondents claimed that they had experienced sexual harassment on the job.

Respondents cited many reasons for not taking action against the perpetrator including fear of losing their job, absence of a proper complaint mechanism and fear of being stigmatised.

“In private organisations, sexual harassment is common,” Jameela, a typist in a private firm in Kannur, a city in the southern state of Kerala, told IPS.

“I experienced (sexual harassment) from my boss when I worked at a company in Chennai. When I resigned I cited the transfer of my husband, and other family matters,” she revealed.

The three jobs that appear to be most unsafe for women are as labourers, domestic workers and small-scale manufacturers.

Nurses in the healthcare sector are also extremely vulnerable to attacks and sexual advances while on the job.

“Nightshift nurses often face abuse and (stigma) — working with strangers and male patients leads to questions regarding their morality,” she added.

The results of a 2007 survey conducted in Kolkata among 135 health workers, including doctors, published in the U.K-based international health journal ‘Reproductive Health Matters’, showed that 57 percent of women staffers had undergone some form of sexual harassment in hospitals.

Analysing the increasing rate of sexual offences against women in their places of work, Dr. Sreelekha Nair, a researcher at the New Delhi-based Centre for Women’s Development Studies, said that sexual harassment is largely the result of a hierarchical power structure in society that strongly favours men.

The 2013 Human Development report, published by the United Nations Development Programme (UNDP), showed that gender equality in India is among the worst in the world; and its performance was the worst in all of South Asia.

This gap in equality is most prevalent in the workplace, Nair said, where women are viewed as “secondary citizens”, forcing them to keep a low profile. But when they do begin to gain equal footing with their male counterparts, men often react with hostility, or violence.

Thus “the law is not the ultimate solution to sexual harassment – the mindset of the people needs to be changed through greater awareness”, she told IPS.

The rape case in Delhi, and the ensuing outrage, has brought a great deal of attention to the issue. The strong stand taken by the female workforce and a host of women’s organisations after the December incident pressurised the government, as well as businesses, to step up security measures for women staffers.

The climate of anger in the aftermath of that tragedy also fuelled awareness about the right to protest against harassment in the workplace and file complaints with the proper authorities.

Dr. Pushpa Kurup, managing director of Vitalect Technologies and convenor of the women’s forum of the National Institute of Personnel Management in Thiruvananthapuram, told IPS that the monitoring system for sexual harassment in the government and private sector has been strengthened since late last year.

“Effective training programmes are essential to sensitise all staffers to recognise sexual harassment, prevent it and deal with it when it does occur. Many complaints can be resolved effectively and positively through informal methods. It is critical that the complaints committee empathises with the complainant and not judge her by their own moral standards,” added she.