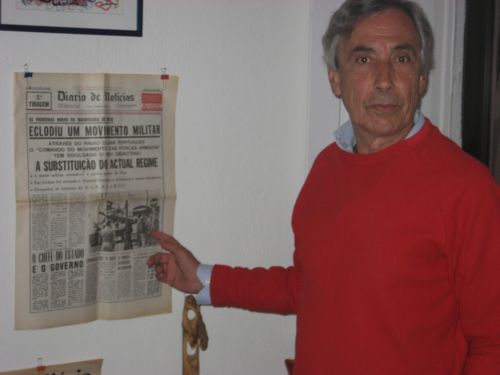 LISBON, Apr 25 2013 (IPS) - The anniversary of the peaceful Carnation Revolution that overthrew Portugal’s 1926-1974 dictatorship has gone from being a popular celebration to a day of mass protests against the draconian austerity policies of the government of Prime Minister Pedro Passos Coelho.

For the second year running, the commemoration of Apr. 25 gave rise to demonstrations against the conservative government’s cutbacks in social spending and its handling of the severe economic crisis in accordance with the terms laid down by the so-called “troika” of international creditors: the International Monetary fund, EU and European Central Bank.

The most prominent of the officers who led the 1974 uprising by the Armed Forces Movement (MFA) boycotted the official ceremonies in parliament on Thursday morning to protest government measures that they said ran “against the spirit of April.”

In parliament, the seats of honour reserved for the most famous of the so-called “captains of April” who are still alive were empty, including those of Generals Pedro Pezarat Correia, Franco Charais, Amadeu Garcia dos Santos; colonels Vasco Lourenço, Otelo Saraiva de Carvalho and Mario Tomé; and admirals Manuel Martins Guerreiro and Vítor Crespo.

The ceremony was also skipped, “in solidarity with the military officers who paved the way for democracy,” by former president Mario Soares (1985-1995), the historic leader of Portugal’s socialists who is considered the father of the democratic state since the 1974 uprising put an end to the dictatorship.

Security was especially tight this year events because of fears of protests. Unlike in previous years, only invited guests were allowed in the legislature for a celebration that was almost exclusively limited to politicians.

As he left the building, socialist lawmaker and former minister José Lello said this was because “they are afraid of and feel harassed by” the Portuguese people who are outraged at the growing poverty and hardships caused by the austerity policies that the troika set as a condition for a 110-billion dollar financial bailout for Portugal in 2011.

For the first time in 39 years, the gardens of the Belém presidential palace and the São Bento palace – the seat of parliament – in Lisbon were not open to the public on Apr. 25.

Lello said that was because President Aníbal Cavaco Silva and Prime Minister Passos Coelho wanted to prevent protest demonstrations in the gardens.

Antonio Costa Pinto, a professor of political science at the University of Lisbon, told local media that it was unacceptable for political institutions to “end up protecting themselves from the reactions of the people” on a symbolic date when “the fiesta of democracy is celebrated.”

But “politicians are not the only representatives of society,” playwright and journalist Fernando Sousa told IPS. In 1974, Sousa was a junior army officer who had just returned from Mozambique, where he was sent to fight in the former colony’s war of independence from Portuguese rule after he was drafted out of the university.

An active member of the left wing of the army during the revolutionary period, Sousa later went into journalism, and eventually wrote plays set in the colonial war of Mozambique.

In his “studio-refuge” in the Magoito district along the coast on the north side of Lisbon, he invited a group of friends over on the night of Wednesday Apr. 24. At midnight, everyone sang Grândola Vila Morena, the song that was the signal for the MFA captains’ armoured vehicles to advance on Lisbon on Apr. 25, 1974.

Chatting with IPS, he did not conceal his disappointment that the hopes raised by the Carnation Revolution were not completely fulfilled. But he was upbeat nonetheless. “I might get old, but Apr. 25 never will,” he said.

Like many Portuguese of his generation, he is slightly bitter when he takes stock of the situation 39 years on because of the gap between “what was dreamt of and what was achieved.” He said this year’s Apr. 25 was “an anniversary where the sensation of a setback reigns.

“Looking at the ultra-liberal path taken by the government, I often think, why did we do Apr. 25? But I’m optimistic anyway because it’s necessary to believe that politics don’t only belong to politicians, but also to civil society, to women, men and children who are determined to build a new society.

“Apr. 25 meant a more just society, and not this nightmare that we are living today, with politicians who shunted us from the MFA to the IMF,” he said with irony.

Tradition was only maintained Thursday in the parade down Lisbon’s main artery, the Avenida da Liberdade, which was packed curb to curb with thousands of people led by Colonel Lourenço and the armoured vehicle in which Marcello Caetano, prime minister at the time of the coup, and the figurehead president Admiral Americo Thomaz were driven to the airport and expelled to Brazil 39 years ago.

Alberto da Ponte, a pensioner taking part in the march, told IPS that “the expectations and hopes that the people had in 1974 for a better life were frustrated by the (right-wing and socialist) political parties that alternated in power for 35 years and which were the ones who were to blame for taking us into the abyss of this democracy imposed according to their interests.”

At his side, textile worker Feliciano Dias Marinho said “the lesson that these nearly 40 years of democracy leave us is the alternation in power between the socialists and the right, who have led us into bankruptcy, and today the only thing we have is this switching back and forth between them, which should be replaced by true democracy.”

In the front rows of the march, university student Carlos Medina Abreu told IPS “I completely agree with the stance taken by Mario Soares and the ‘captains of April’, to not attend the ceremonies in parliament, because this regime is a farce of democracy, with actors who follow word for word the script written by the technocrats of the IMF and the EU.”