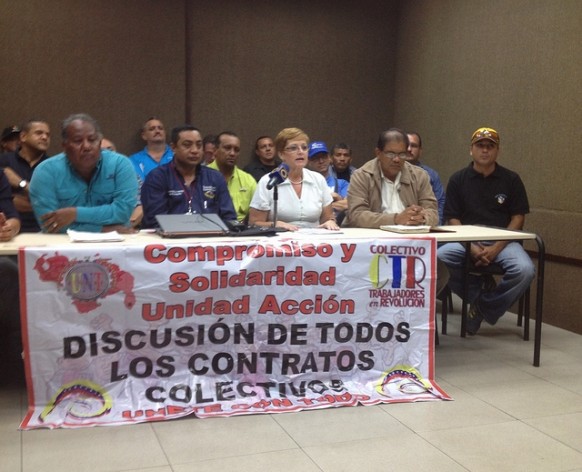 CARACAS, Apr 30 2013 (IPS) - Misogyny is the word on the lips of women trade unionists in Latin America when asked what they have had to fight against to win spaces in the leadership bodies of labour unions in the region.

“The problems faced by women workers are greatly aggravated by misogynistic attitudes that further block progress towards their rights and hinder the participation in decision-making posts of those who are working to modify the culture in the labour movement,” said Mexican trade unionist Martha Heredia.

“The participation of Latin American women workers in trade union leadership posts is not in line with the percentage of women who are in the labour force,” said Heredia, chair of the Trade Union Confederation of the Americas (TUCA) Women’s Committee.

Heredia and the other women labour leaders interviewed by IPS pointed out that only one Latin American woman has reached the presidency of a trade union federation: Bárbara Figueroa, who since 2012 has led Chile’s Central Unitaria de Trabajadores, the country’s biggest union, with over half a million members.

Alexandra Arguedas, who heads TUCA’s gender programme, explained that to boost female participation in the labour movement, the regional confederation demanded at its second ordinary congress in 2012 that its member unions set a 40 percent quota for women in leadership structures.

TUCA is the International Trade Union Confederation (ITUC) regional organisation for the Americas, and the largest regional workers´ organisation. It was founded in 2008 and represents more than 50 million workers from 53 national trade unions in 23 countries.

Arguedas said from the TUCA offices in Costa Rica that the higher level of participation and representation of women workers was also a pillar of the labour movement’s internal reforms – a process of renewal and adaptation to the new economic and social realities of the structures, tasks and proposals of the trade union movement.

As part of that self-reform process, she said, “participative gender audits are being implemented as a key instrument to make the gender perspective a cross-cutting question throughout the entire trade union movement.”

Training of women is also being given a push, and delegations made up of equal numbers of men and women have started to be required for all activities.

The Economic Commission for Latin America and the Caribbean (ECLAC) reports that 55 percent of women in the region participate in the labour market, compared to 79 percent of men.

Didice Godinho from Brazil, the founder in 1987 of one of the first women’s commissions in a regional central trade union, said the growing insertion of women in the labour market was behind the increasing incorporation of gender issues on the labour movement agenda, along with the unceasing pressure of women trade unionists.

Godinho, a social researcher who is now secretary of women’s issues in Brazil’s Central Unico dos Trabalhadores, the country’s largest union with more than 23 million members, summed up the challenges facing the objective of gender parity in the 2009 study “Latin American Trade Unionism and Gender Policies”.

Besides the patriarchal culture in Latin America, which is especially deeply-rooted in the labour movement regardless of ideological orientation, Godinho pointed out that there are hurdles to the full participation of women in trade unions, such as their role as mothers, for which the movement must find answers.

She welcomed the fact that one of TUCA’s founding principles is that the labour movement must be inclusive, and that it promotes gender equity in its leadership bodies and all of its activities. But she said that putting equality principles into practice “is a pending challenge.”

Máspero, the national coordinator of the Unión Nacional de Trabajadores (ÚNETE) and a presidential council member of the World Federation of Trade Unions, said gender policies like those fomented by the International Labour Organisation helped women gain space in trade unions.

But the leader of ÚNETE – which has 1.5 million members from the public and private sectors – said she doubted that quotas were the way to achieve greater participation by women in union leadership posts.

“We forge a place for ourselves in the battle, elbow to elbow with men, against the common adversary: the bosses, capital, bureaucracy, and in that battle we don’t need concessions, because women have the same values and capacities as men when it comes to participating and leading,” she said.

She noted that women trade unionists must somehow juggle their commitments as “mothers, wives in many cases, breadwinners, workers and labour or political activists.”

She added that quotas “are merely cosmetic measures if women are not given practical help in handling their multiple roles.”

Máspero said that while the labour movement in Latin America is mainly in the hands of the left, “it behaves in a retrograde manner in terms of gender, and is still dominated by a patriarchal, machista culture.

“I don’t see women heading the labour movement in Cuba, Argentina or Brazil – only in Chile has the rhetoric been translated into practice,” she said.

Heredia, who is also one of the leaders of the Mexican Telephone Workers Union and is involved in gender policy questions in her country and in ITUC, said women leaders have the challenge of “strengthening the role of female workers not only in the labour movement but also in collective bargaining.

“We must be in the vanguard in vindicating women’s rights, especially the right to decent work, which includes a living wage, social security coverage, bilateral negotiations and a gender perspective as a cross-cutting issue,” she said.