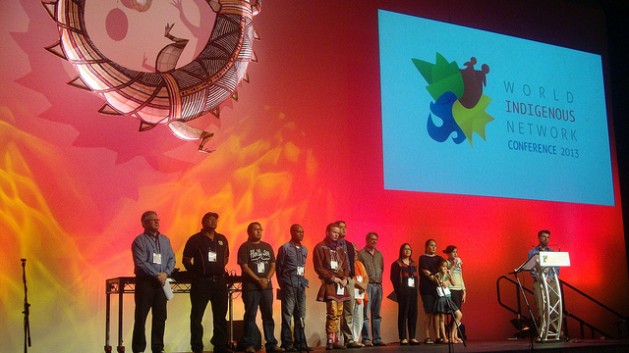 The delegates selected to speak at the closing session in Darwin stressed the commitment to strengthening the global indigenous network, to get their collective voice heard around the world. Credit: Milagros Salazar/IPS

DARWIN, Australia, May 30 2013 (IPS) - Some good-byes can actually mean the start of a long road working together. That was how it felt at the end of the World Indigenous Network (WIN) conference in this northern Australian city.

The big challenge is to consolidate “the indigenous network so its collective voice can be heard” and to get governments to implement its proposals, said one of the 10 speakers chosen by the delegations from more than 50 countries to sum up what was discussed in four days of sessions at the May 26-29 conference.

The gathering, supported by the Australian government, enabled face-to-face exchanges among indigenous people from around the world, who shared best practices in conservation of ecosystems and biodiversity and in the sustainable use of protected natural areas in Africa, Asia, Latin America, Canada and Australia.

The delegates to the conference of the “international network of indigenous and local community land and sea managers” stressed the importance of the world recognising that for ages, indigenous people have protected the land and sea thanks to their ancestral knowledge, and that their culture and way of life depends on their territories.

After these few days in Darwin, “I have the courage to continue my work with my community,” an enthusiastic Aei Satu Bouba, coordinator of the Cameroon Indigenous Women Forum, told IPS.

The new developments that came out of the WIN conference included the announcement of the creation of the Pacific Indigenous Network (PIN).

Rosiana Lagi, a doctoral student at the University of the South Pacific in Fiji, told IPS that through PIN, the Pacific island nations would seek “the support of our governments.”

The importance of global efforts was highlighted on Wednesday, the last day of the conference. The conservation work of ICCA Consortium was presented as an example of such efforts.

Since 2010, the global association of indigenous organisations, local communities and supporting NGOs from around the world has promoted the national and international recognition of and support for ICCAs: Indigenous Peoples’ and Local Community Conserved Territories and Areas.

Taghi Farvar, president of the ICCA Consortium, told IPS that they work closely with the Secretariat of the Convention on Biological Diversity, which requires that countries include indigenous people and local communities in the conservation of fauna and flora.

Challenges and problems were also discussed alongside the successful practices presented at the four-day WIN conference. The representatives who spoke at the closing session stressed that not only the participation of indigenous and community leaders needed to be guaranteed, but local and grassroots involvement as well.

The majority agreed that more dialogue should have been allowed in the presentations.

In the full auditorium during the closing session, perhaps the most sensitive issue was brought up by the representatives of Latin America, whose spokespersons pointed out that the question of defending indigenous territories was glaringly absent during the conference.

They also complained about the shortage of interpreters.

However, the participants highlighted the efforts of the delegates to understand each other, despite the language barriers.

The Latin American delegation, mainly made up of people from Ecuador and Brazil, as well as activists from Bolivia, Colombia, Mexico and Peru, said they went “one step further” by demanding that governments recognise indigenous rights over their ancestral territories.

“It’s not just about indigenous people taking care of parks and protected natural areas, but about a question of legitimacy, of states recognising that we have been the owners of the territory for a very long time,” Paulina Ormaza, an indigenous woman who formed part of the group from Ecuador, told IPS.

Juan Chávez, a member of the Shipibo indigenous community from Peru, remarked to IPS that Latin America’s experience in that area would have helped to “expand the vision” of participants from other regions, especially in a context of promoting private investment on indigenous land.

How can conservation of the environment and of indigenous territories be advanced in the midst of the interests of the states? the Latin American delegates asked, pointing out that this thorny issue is actually faced by countries in every region.

Melissa George, a member of the Wulgurukaba aboriginal tribe of Australia and co-chair of the WIN National Advisory Group, told IPS that in her country, the extractive industries “are always the winners.”

Perhaps the only difference between indigenous people in Australia and Latin America is that Australia’s aborigines are not displaced from their territories by these investments, she said.

The defence of indigenous land is related to the implementation of the requirement that local and native communities be previously consulted about any investment project affecting their territory or culture, as stipulated by International Labour Organisation (ILO) Convention 169 Concerning Indigenous and Tribal Peoples.

The tension and activism surrounding the question of prior consultation in Latin America today was not discussed in Darwin. Peru was the first country in the region to pass a specific law to guarantee that right, in line with Convention 169, against a backdrop of conflicts and protests over mining, oil and infrastructure investment.

Ecuador recognises the right to prior consultation in its constitution, but the specific rules and regulations for implementation have not yet been approved, as demanded by the country’s indigenous organisations, their representatives told IPS.

The approval of the regulations for prior consultation is also under debate in Brazil. Cristina Cambiaghi, an adviser to the government’s National Indian Foundation (FUNAI), told IPS that “this process serves as an opportunity for dialogue to achieve recognition of the rights of the 305 indigenous peoples in Brazil.”

During her participation in the conference, Cambiaghi also pointed to pilot programmes for the application of a policy of indigenous territorial and environmental management.

“The aim is to guarantee and promote the protection of their territories, respecting their autonomy in line with the country’s laws,” she said.

But to face such challenges, it is necessary to strengthen the global indigenous network, participants in the conference agreed.

To that end, Eileen de Ravin, manager of the Equator Initiative, told IPS that they were waiting for a response from the different countries, under the premise that “governments are in power to serve, not just to say.”

The Equator Initiative is a partnership that brings together the United Nations, governments, civil society, businesses, and grassroots organisations to build the capacity and raise the profile of local efforts to reduce poverty through the conservation and sustainable use of biodiversity.