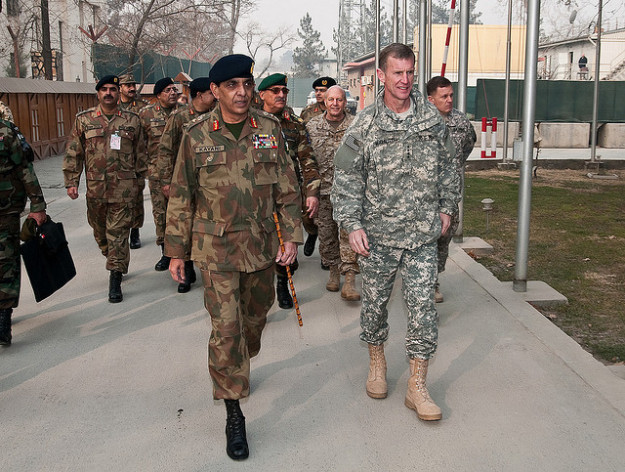 WASHINGTON, May 14 2013 (IPS) - With this weekend’s national election in Pakistan seeing historic high turnout resulting in an overwhelming vote for a single party, foreign policy observers here are suggesting that the United States will need to finally redefine its longstanding relationship with the Pakistan Army.

The electoral result is being hailed as a critical consolidation of democracy in Pakistan, constituting the first time in the country’s history that national leadership has been handed over from one civilian government to another.

“The United States stands with all Pakistanis in welcoming this historic peaceful and transparent transfer of civilian power, which is a significant milestone in Pakistan’s democratic progress,” President Barack Obama stated Sunday.

“By conducting competitive campaigns, freely exercising your democratic rights, and persevering despite intimidation by violent extremists, you have affirmed a commitment to democratic rule that will be critical to achieving peace and prosperity for all Pakistanis for years to come.”

Indeed, the majority received by three-time prime minister Nawaz Sharif’s Muslim League party could now allow it to form a new government on its own, a landslide result that has surprised many long-time Pakistan observers. Perhaps more surprising were turnout rates of around 60 percent, the highest in four decades.

“The United States should be very pleased that in an election where Pakistani militants told voters not to vote, and offered dire threats if they did, we have the highest turnout in a Pakistani election since 1970,” Andrew Wilder, head of the Pakistan programme at the United States Institute of Peace, a quasi-government think tank here, told IPS.

“That’s a strong endorsement that the vast majority of Pakistanis are rejecting the calls of the Taliban, and yet another important step towards consolidating democracy in Pakistan. The military will still be a very important force in Pakistani politics, but it’s a bit less powerful today than it was a week ago.”

Still, Wilder foresees relative continuity in U.S. relations with Pakistan. He notes that while the past two years were particularly rocky – bilateral tensions have spiked repeatedly – ties have remained strong of necessity, particularly due to Pakistan’s centrality in Washington’s attempts at stabilising Afghanistan ahead of an announced military withdrawal next year.

Yet others see the strengthening of the civilian government in Islamabad as an opportunity for a pivot in U.S. policy towards Pakistan.

A democratically elected government relinquishing power to another civilian government “marks a new phase in Pakistan’s democratic struggle, [and] indicates the need for a reassessment of U.S. policy toward the country,” Ishrat Saleem, a research associate at the Center for Pakistan Studies at the Middle East Institute, a Washington think tank, wrote recently.

“Washington has traditionally found a willing partner in the General Headquarters of the Pakistan Army … to aid its pursuit of strategic and tactical objectives in the region. Such an arrangement saw Pakistan’s generals making U.S.-friendly decisions on behalf of the state without being held accountable for their actions.”

But recent years have seen “a visible shift … in the country’s power dynamics”, Saleem notes – a shift topped by Saturday’s election.

Since Pakistan’s creation in 1947, the country’s military has formally taken over power numerous times – Sharif himself was deposed in a coup in 1999. Yet the military has remained immensely powerful behind the scenes at all other times, as well, and in this role it has functioned as a central liaison with the United States.

Today, the United States is Pakistan’s largest bilateral donor, and Pakistan is the second-largest recipient of U.S. foreign aid, amounting to some 20 billion dollars over the past decade. While high-level legislation in 2009 authorised around 7.5 billion dollars in civilian aid over five years, U.S. support to the military has remained very significant.

In President Obama’s budget request for aid to Pakistan for the current fiscal year, around 58 percent was to be earmarked for “security assistance”, according to a report by the Congressional Research Service (CRS), the U.S. Congress’s main research arm. The new election may now have to lead to a rethink of that proportion.

“The U.S. has been relying for far too long on a uni-dimensional relationship with the Pakistani military, and we now need to focus on broadening the breadth of our relationship with the political leaders and the people,” Dan Twining, a senior fellow and Pakistan scholar at the German Marshall Fund of the United States, a Washington think tank and foundation, told IPS.

“The United States wants to strengthen the hand of the civilian government, and Nawaz Sharif’s primary mandate is now economic development – that and taking on the governance issues that plagued the last government.”

Twining admits that the military will remain central in Pakistani policymaking. But he says that even as the country continues to reel from a strengthening insurgency (in turn exacerbating the U.S.-led military mission in Afghanistan), the roots of these problems are not necessarily security-related.

“These are not military problems, but rather those related to energy, infrastructure, water supply,” he says.

“So even if we concede that the military will continue to control foreign policy, the long view suggests that Pakistan’s most critical problems are in the civilian realm. These require good governance to get the economy going, to create jobs – issues the military won’t and simply can’t tackle.”

Significant security issues do remain in Pakistan, of course, with the days leading up to the election having been extraordinarily bloody. And Sharif has suggested that he, too, realises that a solely military strategy will not work to bring peace.

A week before the election, several Islamist groups said they would halt attacks on Sharif’s party, and the candidate stated his openness to negotiations with the Pakistani Taliban.

“The connection with the militants is significant, but it’s important to realise that Sharif made a tactical deal, not a governance deal – this was about getting through a very dangerous campaign,” Twining says.

“Interestingly, when Sharif said he would be open to dialogue, the head of the Pakistan Army, General [Ashfaq] Kayani, said his forces were not fighting the extremists because of the United States, but rather because they wanted to overthrow the government. Fundamentally, this is a core problem for Pakistan, and Pakistan will be on the one to deal with it.”