UNITED NATIONS, May 17 2013 (IPS) - In the late 19th century, Russian playwright Anton Chekhov famously touted one golden rule for dramatic productions: if you show your audience a loaded gun in the first act, that gun must go off by the last. 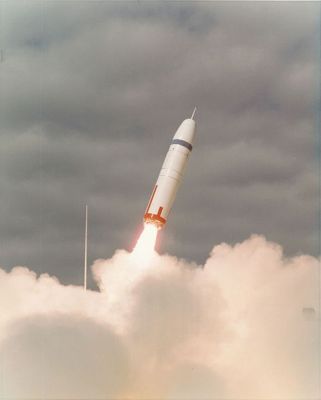 But Chekhov’s storytelling trope is troubling if applied to the world’s weapons technology today, which include an estimated 17,300 nukes – used primarily by nations as props to leverage international power.

“It’s hard to imagine any military mission that will require the use of one nuclear weapon. The use of 10 weapons would be a catastrophe beyond human experience, and 50 is unthinkable,” said Joe Cirincione, president of the Ploughshares Fund, a global security foundation based in the U.S.

“The number you need to actually deter an enemy from attacking the U.S. with or without nuclear weapons is very, very low. To be on the safe side, you might want a couple of hundred,” he told IPS.

“The idea that we need thousands of nuclear weapons… is an outmoded, irrational, expensive legacy of the Cold War,” he said.

While the U.S.’s nuke budget is secret, Cirincione estimates that in the next decade, the U.S. will spend 640 billion dollars on nukes and its related programmes – such as missile defence systems, environmental clean-up of nuclear activity and the technological upgrade of the current nuclear arsenal.

Asked about the U.S.’s role in pushing for nuclear disarmament and non-proliferation on the international scale, Cirincione said, “The U.S. is probably the most influential voice in this debate, but it can’t do it alone. Most importantly, it needs Russia to reduce the arsenals with them.”

The world’s nine nuclear powers are excusing themselves from multilateral forums on nukes.

The Non-Proliferation Treaty (NPT) – which aims to prevent nuclear proliferation and promote nuclear disarmament – is signed by 190 parties. According to the U.N., “More countries have ratified the NPT than any other arms limitation and disarmament agreement.” But those absent from the treaty include nuclear powers India, Israel, Pakistan and North Korea.

When the International Conference on the Humanitarian Impact of Nuclear Weapons convened in Oslo in March, only two of the nine nuclear powers – India and Pakistan – were in attendance.

On May 6, IPS reported that nuclear powers France, U.S., Israel and the U.K. abstained from the U.N. General Assembly vote on whether or not to host its first ever high-level meeting on nuclear disarmament. The vote passed, and the date is set for Sep. 26, but the U.S., France and the U.K. remain unsupportive.

And on May 13, Erin Pelton, spokesperson for the U.S. Mission to the U.N., announced that her country refuses to send its ambassadors to any U.N. Conference on Disarmament (CD) meeting during Iran’s rotating presidency, from May 27 to Jun. 23.

UN Watch executive director Hillel Neuer quipped that putting Iran in charge of the CD “is like putting Jack the Ripper in charge of a women’s shelter”.

He added, “Any member state that is the subject of U.N. Security Council sanctions for proliferation – and found guilty of massive human rights violations – should be ineligible to hold a leadership position in a U.N. body.”

The CD is widely seen as unproductive, and has been so for the past 15 years. But before then, the CD and its predecessors negotiated the NPT and the Comprehensive Nuclear-Test-Ban Treaty, among other agreements.

Jim Paul, senior adviser at Global Policy Forum, responded to Neuer’s statement by noting the irony in the U.S.’s own boycott of the CD.

Paul told IPS in an email exchange that the U.S. is the world’s largest arms exporter; it has one of the most lethal nuclear arsenals; it recently used depleted uranium munitions, cluster bombs and land mines; it keeps its military bases scattered around the world; and it carries out exorbitant military operations.

He said, “Right-wing critics of the U.N. like (to) argue that only ‘good’ governments should preside over U.N. bodies. But who ARE the ‘good’ governments? The ones that are friendly with the U.S. and Israel, of course!”

“If the U.S. and Russia can agree to cut their arsenals in half, for example, as they did in the 1980s and the 1990s… it would be universally applauded, and it would be very difficult for bureaucracies and political opponents to resist that in either country,” said Cirincione.

But U.S. progress for disarmament and non-proliferation has stalled in the past few years. George Perkovich, director of the Nuclear Policy Programme at the Carnegie Endowment for International Peace, attributes the U.S.’s balk partly to internal politics in Washington.

In his April 2013 monograph, Do Unto Others: Toward a Defensible Nuclear Doctrine, Perkovich writes, “A relatively small, specialized community of experts and officials shapes U.S. nuclear policy.”

Members of this community often distort nuclear threats to the U.S., as well as the best ways to respond to such threats, argues Perkovich. They do this not in the U.S.’s national security interest, but in their own career interests to prevent “their domestic rivals from attacking them as too weak to hold office”.

Perkovich also notes in his monograph that Iran, North Korea and Pakistan believe having their own nuclear arsenals deter U.S.-led regime change. They fear the fates of nuclear-free Iraq in 2003 and Libya in 2011.

Asked how the U.S. should respond if future world governments – oppressive or not, who are acting against U.S. interests – continue pursuing nukes to prevent regime change, Perkovich told IPS that would be a difficult problem.

“The one and only thing nuclear weapons are good for is to keep people from invading your country. So, states and leaders that worry about getting invaded tend to find nukes attractive, or alliance with the U.S. attractive,” he said.

“Non-proliferation would be easier to achieve if states didn’t worry they were going to be invaded and/ or overthrown if they didn’t have nuclear weapons.

“The problem, clearly, is that some governments are so brutal and menacing to their own people and neighbours that it is hard to foreswear trying to remove them,” he added.

Perkovich recommended that the U.S. limit pressure against repressive governments to political and moral means, as well as to sanctions; and that the U.S. clarify it won’t act militarily, if the repressive regime does not attack its neighbours or seek nukes.

Cirincione, author of Bomb Scare: The History and Future of Nuclear Weapons, argued that vying for nukes, in Iran and North Korea’s cases, may actually be counterproductive.

“I don’t think it improves their security, I think it isolates them even further,” he said. “It prevents them from forging the kind of international ties that can really aid their country, build their economies (and) increase their influence.

During his December 2012 speech at the National War College in Washington, U.S. President Barack Obama said, “Missile by missile, warhead by warhead, shell by shell, we’re putting a bygone era behind us.”

“The president faces a multitude of pressing issues, but only two of them threaten destruction on a planetary scale: global warming and nuclear weapons,” said Cirincione.

While opposition to nuclear disarmament and non-proliferation is prevalent inside Washington, it pales in comparison to opposition facing warming, immigration, or tax reform.

“This is an opportunity for the president to make a major improvement in U.S. and global security with a relatively small investment of his time,” said Cirincione, who explained that Obama’s efforts to curb nukes may conclude a historic arc, which started with President John F. Kennedy’s efforts in the 1960s and was accelerated by President Ronald Reagan’s efforts in the 1980s.

Cirincione said, “(Obama’s) got three and a half years to do it. If he starts now, he can get the job done. He can change U.S. nuclear policy to put it irreversibly on a path to fewer nuclear weapons, and eventually (eliminate) this threat from the face of the earth.”