WASHINGTON, May 30 2013 (IPS) - Consumer advocates and environmentalists this week are taking advantage of an industry conference to highlight concerns over the U.S. government’s pending approval of a genetically modified eucalyptus tree. 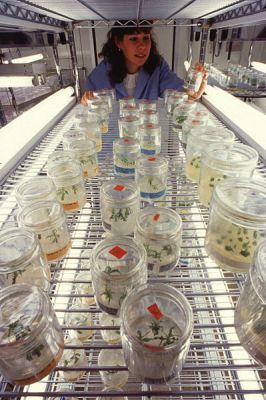 The project proposal is currently being weighed by the U.S. Department of Agriculture (USDA). If approved, it would constitute the first time that a bioengineered tree has been authorised for commercial production in the United States.

On Tuesday, activists at the International Union of Forest Research Organization (IUFRO) Tree Biotechnology Conference, taking place throughout the week in North Carolina, engaged in what organisers say is the largest protest ever carried out against genetically engineered (GE) trees.

According to demonstrators, the public currently has a potent opportunity to weigh in on the issue.

“Given that this project hasn’t been approved yet for commercial release, we still have a chance to prevent the contamination of our forests,” Tom Llewellyn, a coordinator with REAL Cooperative, a North Carolina-based advocacy group, told IPS.

“This is really important in part because it’s very different from the genetically engineered foods that we’re already subject to here in the U.S. In this situation, we actually have a chance to stop something before it’s too late.”

The proposal, by a company called ArborGen, is for a eucalyptus tree that has been genetically modified to be resistant to colder temperatures. If the government allows for its commercialisation, the plan is for the tree to be grown on plantations in the southeastern United States and subsequently burned for “biomass” electricity production.

The use of GE trees for biomass production is a central focus of this week’s IUFRO conference, aimed at “addressing the growing need for sustainable, renewable sources of biomass, in the face of climate change”, according to the event website. (Further clouding the issue, scientists have pointed out that biomass can be as carbon-intensive as coal-fired electricity production.)

The result, ArborGen says, would be a renewable energy source in line with evolving commitments towards mitigating human-caused climate change. Indeed, such an aim would also be directly in line with a new plan, released by the U.S. government last year, to significantly bolster the U.S. “bioeconomy”, with a central priority placed on genetic engineering.

“It is important to note that this international conference has brought together some of the most prominent scientists in the world to discuss the concerns of an increasing global demand for wood, fuel and fibre,” an ArborGen spokesperson told IPS.

“ArborGen sees great promise in eucalyptus as a hardwood species to mitigate the pressure to harvest our natural forests. As we go through a very stringent federal regulatory process, we are confident that the science has and will show this tree can be a useful tool for landowners to help meet this demand.”

ArborGen explains that it chose a Brazilian species of eucalyptus because it is fast growing and yields a relatively massive amount of wood per hectare. The tree is not native to the United States, however, and had been unable to withstand frosts in most of the country.

Critics of the plan have pointed out that eucalyptus trees are known to be invasive, water-intensive and a notorious fire hazard. Beyond this, however, the project has reignited longstanding worries about whether farmers or plantation managers can actually keep genetically engineered products permanently separated from other areas.

“Many people are particularly concerned about the transmutation of our forests, as we’ve already seen this with GE food crops, particularly annual crops like corn and soy,” Llewellyn says. “Now, the idea of doing the same around forests is very concerning.”

While accidental cross-pollination would not be a concern for the U.S. with non-native eucalyptus, Llewellyn says that other GE projects currently under development are seeking to modify native trees, including poplar and pine. These modifications would seek both to make the trees resistant to certain chemical pesticides and to include natural pesticides within the trees.

“What this means is that every cell of that tree would become a pesticide, and that includes the pollen,” he says.

“We estimate that a GE poplar tree could cross-pollinate with other trees 100 miles away, so the potential for contamination would be very high. In turn, this could have a significant impact on insects and on birds eating those insects. While the ultimate effect is not certain, the potential for harm would seem to be very high.”

The difficulties of maintaining control over the “contamination” of natural plants due to cross-pollination with GE products was recently given a surprising boost. On Wednesday, the U.S. Department of Agriculture announced that an Oregon farmer found growing in his field a type of GE wheat that has never been commercially released.

The leak is reportedly still being investigated. But media reports suggest that the wheat’s manufacturer, Monsanto, carried out field tests of the product in Oregon between 1999 and 2001.

“This outbreak … confirms our concerns that GE crops cannot be controlled,” Janet Cotter, a scientist with Greenpeace International, an advocacy group, said Thursday.

“This is the latest in a long line of incidents involving the contamination of our food supply with GE crops not approved for human consumption. The only way to protect our food and environment is to stop the releases of GE crops to the environment – including a ban on field trials.”

Around a quarter-million of ArborGen’s eucalyptus trees have been planted in field tests since 2010, after a lawsuit by a coalition of environmental and public safety groups failed to halt the process. While the USDA has issued multiple assurances on the trees’ safety to both humans and environmental systems, it is now weighing whether to allow the trees to become commercially available.

Though relatively little is known of public opinion on this issue, the USDA’s own certification process has suggested widespread opposition. The USDA received over 37,580 comments to the ArborGen petition by the end of the comment period on Apr. 29. Only four of the comments were supportive of the release of GE eucalyptus trees.

Of course, the public discussion here on genetically modified products has been far more active around food products. According a 2010 poll, just one in five people in the United States feel that genetically modified foods are safe, while a recent public comment period on whether the U.S. government should approve GE salmon garnered some 1.5 million responses.

Meanwhile, the USDA has not yet released a timeframe on when it will decide on ArborGen’s frost-resistant eucalyptus, but observers expect a verdict by the end of the year.