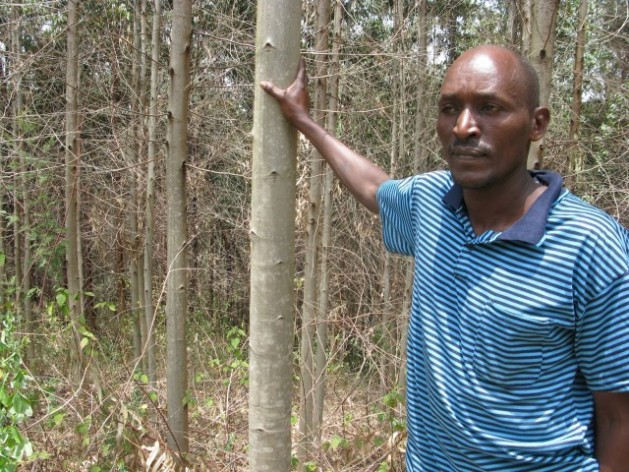 NAIROBI, Dec 11 2011 (IPS) - On a steep slope of land in Thangathi village in Central Province, Kenya, Peter Nyaga surveys his four-year-old eucalyptus woodlot. He calculates the value of every tree on his two-hectare piece of land at maturity in three years.

At the prevailing price of 90 dollars per tree, for 600 trees per half hectare, it totals an amount he thinks he could use to buy another piece of land.

“I planted them just four years ago as a means of controlling soil erosion on this sloping land. And here they are, already grown into huge trees that one can use for timber, charcoal making or some other business,” the 39-year-old father of three told IPS.

While his trees may be able to earn him an income, Nyaga has no idea that by planting them he is helping the world remove greenhouse gases from the atmosphere.

Yet to be released findings from an ongoing study by the Kenya Forest Research Institute (KEFRI) reveal that the tree could be used to mitigate the devastating impact of global warming.

The study aims to estimate the carbon sequestration ability of Kenya’s three-most common exotic tree species; the eucalyptus, pine and cypress trees, compared to one of the most common indigenous tree species in the same area – the indigenous cedar.

The study found that in Central Province, a one-hectare piece of land with 840 eucalyptus saligna trees sequestered 337 tonnes of carbon over eight years.

Sweden, which was recently ranked the world’s top country in fighting climate change according to the 2012 Climate Change Performance Index, produces 50,600 tonnes of CO2 emissions a year.

“The result was determined by calculating the amount of carbon that had been sequestrated by Eucalyptus saligna and two other different types of exotic tree species, namely; Pinus patula (pine), which sequestered 99.4 tonnes of carbon in a period of 10 years, and Cupressus lusitanica (Cypress), which sequestered 73.3 tonnes of carbon in eight years. This was then compared to the indigenous cedar tree species grown in their favourite ecological zones,” said Dr. Vincent Onguso Oeba, the lead investigator of the study who also heads the Biometrics division at KEFRI.

“The indigenous cedar (Juniperus procera) in its best ecological zone in Central Province, with 587 trees on a one-hectare piece of land, was able to sequester only 55 tonnes of carbon in a period of 19 years,” said Oeba.

However, the exotic eucalyptus tree is not very welcome in Kenya. In 2009, Kenya’s Minister of Environment John Michuki issued a directive that all eucalyptus trees growing near water sources in the country be uprooted in an attempt to lessen the impact of the country’s drought.

In Central Province, some farmers who had invested in improved eucalyptus tree species had no choice but to cut them down. However, Nyaga’s woodlot survived because it was more than 30 metres away from the nearest stream. In Kenya, the law allows for exotic trees to be planted in excess of 30 metres away from a watercourse that is more than two metres wide.

“If you plant eucalyptus trees near waterbeds, the roots will sense the presence of moisture, and will thus open the stomata very wide allowing a lot of water to be lost from the soil. But if the same trees are planted in a high-land area, they will sense the reduced soil moisture content, and thus close the stomata as much as possible to retain the little available water,” explained Muraya Minjire, a tree nursery expert working for the Tree Biotechnology Project in Kenya.

(Stomata are microscopic pores on the surface of land plants. They act as gateway for efficient gas exchange and water movement.)

At the moment, KEFRI is monitoring the carbon sequestration ability of 10 more indigenous tree species.

“We are also in the process of developing internationally-accepted equations that will be used locally to accurately estimate the amount of carbon a given tree is able to sequester from the atmosphere at a particular age so that people who are involved in the carbon business will be able to understand the trade,” said Oeba.

According to the study, carbon quantification should be species specific in order to strengthen accounting systems for greenhouse gas emissions.

“We also need to include the aspect of tree species in climate change adaptation policy,” said Oeba.

Meanwhile, Nyaga is still planning to cut down his trees once they mature.

“My ultimate goal is to sell them to the Kenya Power and Lighting Company as electricity supply poles when they get to seven years old,” he told IPS.