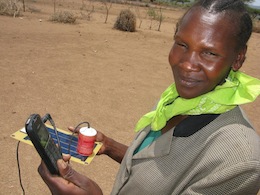 DURBAN, South Africa, Nov 30 2011 (IPS) - Francis Mburu used to keep indigenous cattle in Entasopia village in the semi- arid Kajiado region, 160 kilometres southwest of Nairobi. However, increasing temperatures and frequent droughts in Kenya have made this difficult in recent years.

But now, in an area that has never had electricity, where education is not a priority or sometimes not an option at all, residents of Entasopia are using a solar-powered internet facility to adapt to the changing climatic conditions.

The Nguruman community, largely composed of the Maasai ethnic group, now has access to an ICT facility locally known as Maarifa (“knowledge” in Swahili) Centre. Here they are able to access climate adaptation information via the internet, videos and books. The Arid Land Information Network (ALIN), in collaboration with the Kenyan government, founded the project.

According to Samuel Nzioka, the field officer for ALIN, most of the videos shown at the centre are practical lessons in local languages aimed at boosting the understanding of the concepts of climate change and adaptation, and basic dry-land farming knowledge.

“From reading agricultural books, listening to advice from field officers manning the centre, and watching video clips that show what other farmers are doing to adapt to the changing climatic conditions in other arid areas, I have learnt more resilient methods of animal husbandry,” said Mburu, a 56-year-old father of three.

In the Nguruman community the video facility of the Maarifa Centre is an important component for some.

Samson Ole-Kaparo, a local farmer who can barely read or write, has learned much about climate change adaptation from it and has used the knowledge gained here to diversify his livestock.

"I usually visit this centre over the weekends to watch videos that have teachings on how I can use my small farm, despite the drought," said Ole-Kaparo.

Apart from keeping cattle, Ole-Kaparo has learned how to keep animals that can survive during tough climatic conditions. (The U.N. says more than four million Kenyans are threatened by starvation in the region's worst drought in 60 years.)

"I now keep the indigenous Red Maasai breed of sheep, and I also keep rabbits," he said through a translator. He sells his rabbits to restaurants, especially in Nairobi, where patrons have lately developed an appetite for rabbit meat.

"The Maarifa Centre is simply a place where community members come to acquire knowledge, but is specifically geared towards adapting to climate change," explained Samuel Nzioka, the field officer for the Arid Land Information Network (ALIN).

The centre has 15 computers connected to the internet, and publications on agricultural issues including newsletters, journals, newspapers, magazines, and research reports. There is also a television screen and a video deck.

"An individual community member’s level of education determines the particular facilities he or she can use. Completely illiterate people will always benefit from video shows in their local language, while computer illiterate people can make use of books, research reports, magazines and related materials.

"However, most people with basic education have always developed interest of learning computer skills," added Nzioka.


Because of the project, Mburu now keeps a herd of 45 dairy goats, and has a poultry project. He sells the chickens to the ever-growing indigenous chicken markets in urban centres.

The goat’s milk he produces fetches a higher price compared to cow’s milk.

Climate change in East Africa has resulted in higher temperatures and prolonged droughts and has meant that farmers have had to adapt along with these changes.

“We have seen our pastoralists move to higher grounds in Ethiopia in search of greener pastures. We have seen animal species, that we thought could tolerate drought, die as a result of the prolonged drought. It means that it is not business as usual,” said Dr. Miano Mwangi, assistant director for Animal Production at the Kenya Agricultural Research Institute, and the national coordinator at the Kenya Arid and Semi-Arid Land programme.

It is successes like the one in Entasopia that has experts at the ongoing United Nations 17th Conference of the Parties (COP 17)in Durban, South Africa urging the international community to consider technology transfer as one of the main methods of adapting to climate change.

“In Ghana, we call it climate education, where information communication technology is used to educate people of how to adapt to the new phenomenon,” Atsu Titiati, the Tree Programme director at the Ghana branch of Rainforest Alliance, an international non-profit organisation dedicated to the conservation of tropical forests, told IPS.

He said that in northern Ghana, communities rely on community-based radio to know what types of seed to plant during a particular season, and for the market value of their crops upon harvest.

In Kenya, pastoralist communities use mobile phones to determine the market value of their animals.

“We have rolled out a project in Isiolo district with an aim of reducing food insecurity among the communities,” Rahab Mburunga, the data officer at ActionAid International – Kenya, told IPS.

Through the project, information about the market value of various crops and livestock is sent as short messages to subscribers’ mobile phones.

The project has also given mobile phones to community members so that they can distribute the information to other villagers who might not have phones.

“We have tried it and it is working,” Mburunga said.

In February, the Kenyan government developed a National Climate Change Technology Action Plan. One of the main objectives of this was to explore technology transfer opportunities and to establish national technology innovation centres.

In Mozambique, the government and non-governmental organisations use mobile phones to warn residents in flood-prone areas about the possibility of floods to ensure the timely evacuation of people.

“We usually send short messages to particular community representatives so that it is broadcasted to the rest of the community regarding floods, delayed rainfall or any other necessary agricultural information,” said Josh Ogada, the communication expert at Oneworld, a regional environmental organisation based in Cape Town, South Africa.

According to a statement released by the International Telecommunication Union at COP 17, these technologies hold the key to adaptation, but they remain underutilised in most African countries.

“Today’s advanced technologies can transform social, industrial and business processes to effect the changes needed to achieve sustainability. But while the potential of ICTs to make a real difference is widely recognised by the technology community and government ICT ministries, it is still far from being understood and embraced by environmental lobby groups and policymakers,” the statement said.