Creating Their Own Spring 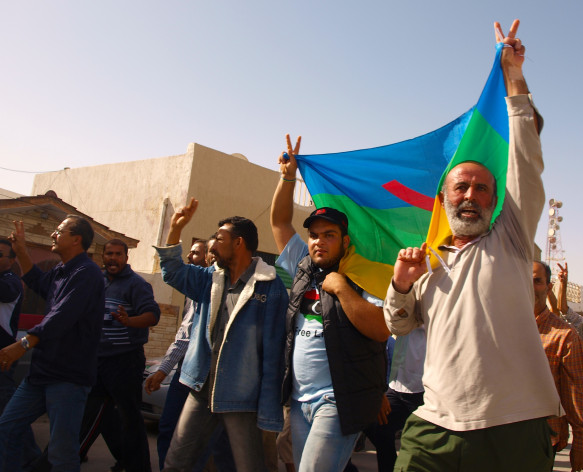 GIRKE LEGE, Syria, Jun 26 2013 (IPS) - The soldiers of former Libyan strongman Muammar Gaddafi had left just a few days before, but a group of about 50 children were already singing in the Amazigh language in the village of Yefren, 110 kilometres south of Tripoli. This month will mark two years since the establishment of the first Amazigh school in Libya.

Infrastructure was as dire as it could be through the war, but enthusiastic volunteers would still find a way to teach in their long forbidden native language, to broadcast radio programmes, and publish newspapers and magazines in Amazigh. Tripoli wouldn’t fall until two months later to the rebels, but Libya’s Amazigh were in a hurry to recover lost time after Gaddafi’s four-decade rule.

Also called “Berbers”, the Amazigh are indigenous inhabitants of North Africa with a population extending from Morocco’s Atlantic coast to the west bank of the Nile in Egypt. The Touareg tribes in the interior of the Sahara desert share the same ancient tongue.

The arrival of the Arabs in the seventh century led to a progressive process of Arabisation. In recent decades that was accelerated sharply under Gaddafi.

"Political prisoners were executed or imprisoned for life under accusations such as ‘sedition and separatism’ or ‘spying for Israel’, only for writing a few lines in our language."

Mazigh Buzakhar, co-founder of Tira – an organisation working for the development of the Amazigh language and culture – sums it up briefly:

“Political prisoners were executed or imprisoned for life under accusations such as ‘sedition and separatism’ or ‘spying for Israel’, only for writing a few lines in our language. Our archaeological heritage was obliterated and even our very moderate current of Islam, Ibadism, was wiped out.”

Buzakhar was imprisoned, and his home library, many of its volumes “sneaked secretly into Libya”, was seized by the former secret services. “Gaddafi’s policies focused on multiplying our people by zero under his Arab-Islamist regime,” he recalls.

Fathi Ben Khalifa is another well-known Amazigh dissident from Libya. He lived in Morocco for 16 years until he left for The Netherlands to escape pressure from Gaddafi on the Moroccan government to hand him over.

In 2011 he was elected president of the World Amazigh Congress, an international organisation based in Paris since 1995 that aims to protect the Amazigh identity. He was also member of the National Transitional Council (NTC) – the parallel government led by rebel leaders – until he left it before the war ended due to “insurmountable differences”.

“In August 2011 we decided to cut ties with the NTC because we realised that the rebel body had no intention of recognising either our language or our presence in Libya,” Ben Khalifa tells IPS.

The constitutional recognition Ben Khalifa looks for is not likely to come in the short term.

“The crux of the matter is that nobody has a clear idea what kind of constitution the Libyan people want, so the commission in charge of writing it hasn’t even been approved yet,” says the senior Amazigh leader.

“We insist that the ultimate goal of our revolution must be a modern and secular constitution but local tribal disputes in many parts of Libya still pose a major hurdle towards normalisation.”

New problems have been added to unresolved ones in Libya’s tortuous transition. But the Amazigh remain determined.

“We are constantly moving forward. Our language, Tamazight, is being taught in our schools and we are not going to waste our time just because part of the Libyan society is still not ready. We’ve decided not to wait,” says Ben Khalifa.

The cultural revival among the Amazigh of Libya seems to mirror that of the Kurds in Syria. Political parties, schools and newspapers have been popping up in Kurdish areas shaking off the rule from Damascus. While the Amazigh in Libya are bringing back their ancient alphabet, Tifinagh, the Kurds of Syria learnt the Latin alphabet to write in Kurmanji, the Kurdish dialect they share with their kin in Turkey.

About 40 million Kurds comprise the world’s largest stateless nation. They number around three million in Syria, and are the biggest minority in the country, as many as the Alawites, the ethno-religious group of Syrian President Bashar al-Assad. Kurds are spread mostly across Turkey, Syria, Iran and Iraq.

With the coming of the Baath Party to power in Syria in 1963, the Kurds there too were subjected to a systematic policy of Arabisation. Kurdish language was prohibited, and many Kurds were denied Syrian citizenship. Some were deported, and Arab settlements established in Kurdish areas.

The hardship faced by both Amazigh and Kurds in their respective states might look alike from the outside, but there is a significant difference: the war in Syria has led to a bloody sectarian conflict that seems to carry on. In that, the Kurds have gone the ‘third way’ to keep both Arab insurgents and Assad forces at arms length.

“Believe it or not, ours is the only region in the country where the will of the Syrian people is respected despite the growing foreign interference,” Salih Muslim, leader of the Democratic Union Party PYD – the dominant force among the Kurds in Syria – tells IPS.

The PYD boasts an ideology akin to the Kurdish Workers Party (PKK), an armed movement seeking rights and recognition for Kurds within Turkey. Muslim talks about “constitutional recognition of the Kurds of Syria”, with a very similar approach to that of the Amazigh in Libya.

The main hurdle, he says, is “Arab-Islamism, a mindset deeply rooted in the region for centuries and perpetuated by both the Assads (President Bashar al-Assad and his father, earlier president Hafez al-Assad), and the core of the Syrian insurgents.”

Ben Khalifa concurs “100 percent” with the Kurdish leader. “How can I be part of a country that doesn’t recognise my existence?”