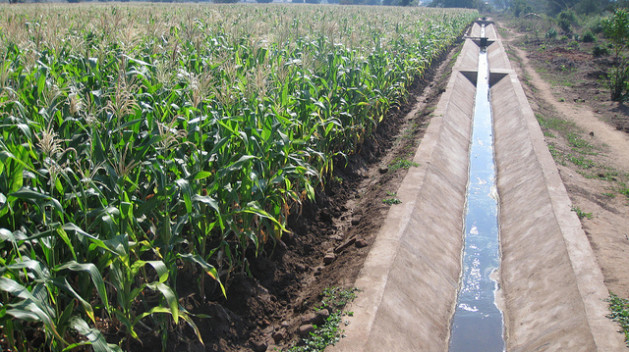 The Food and Agriculture Organisation (FAO) underlines the strong links between the two when it declares that agriculture accounts for over 70 percent of global water use.

Meanwhile, the share of water available for agriculture is expected to decline to 40 percent by 2050, warns an FAO report released here for the agency’s 38thsession, currently underway.

“Water is becoming scarce not because the volume of water is reduced but because demand from society is increasing.” - Prof. Jan Lundqvist, Stockholm International Water Institute (SIWI)

The figures are based on statistics released by the Organisation for Economic Cooperation and Development (OECD).

The availability of fresh water resources shows a similar picture to that of land: sufficient resources at the global level are unevenly distributed, and an increasing number of countries, or parts of countries, are reaching critical levels of water scarcity, according to FAO.

The FAO also says many of the water-scarce countries in the Near East and North Africa, and in South Asia, further lack land resources.

Due to their vulnerability, coastal areas, the Mediterranean basin, the North East and North African countries and dry Central Asia appear as locations where investment in water management techniques should be considered a priority when promoting agricultural productivity growth.

If there is no water (e.g. in deserts), food cannot be produced, he pointed out. But water is a renewable resource and the hydrological cycle, which is driven by the sun, will continue also in the future.

The amount of renewable freshwater in terms of precipitation falling over the continents is about 110,000 km3 per year, he said. But with an increasing population, the amount of water per capita is inevitably reduced.

It is increasingly difficult, costly and dangerous, according to Lundqvist, to divert more water from rivers and lakes and to pump water from groundwater reserves.

“At the same time, with economic development, the per-capita demand increases. It is, indeed, a tricky equation,” he noted.

Since everything humans eat requires water to be produced, the paradox of the “water we eat” was best illustrated by an exhibition at a SIWI conference last year, which pointed out that the production of an average hamburger – two slices of bread, beef, tomato, lettuce, onions and cheese – consumes about 2,389 litres of water, compared to 140 litres for a cup of coffee and 135 for a single egg.

Vincent Casey, technical support manager at the London-based WaterAid, told IPS that irrigated agriculture accounts for the vast majority of water withdrawals in many countries.

A great deal can be done to prevent water scarcity through changes to thirsty agricultural practices.

Crop types, irrigation methods and water tariffs can be changed to reduce demand. These actions require political commitment, which can be difficult to get, he noted.

Water scarcity is already a daily reality for over 760 million people right now – not because irrigation farmers are drinking all of their water, Casey said, but because of a lack of the water supply services required to make use of available water.

“If we didn’t have reservoirs, pipes and taps in the UK, we would be water scarce too”.

Management of the water supply crisis will involve demand management in areas where there is pressure on the resource, he added, and supply management where people lack any kind of access to water — not because it isn’t there but because it requires investment to develop it.

If there is a scarcity of water, Lundqvist told IPS, food production will be a victim for two main reasons.

Firstly, other sectors will require a large share of water supply. With urbanization both industry and households will be able to articulate their demands and they are in a better position to pay for additional water.

“Water is becoming scarce not because the volume of water is reduced but because demand from society is increasing,” he said.

A second reason is that precipitation pattern will be more stochastic as a result of global warming. Risk will increase for farmers, since uncertainty will increase.

This is particularly problematic, he pointed out, for rain-fed agriculture. But with an increasing frequency and amplitude of droughts and floods, and with the increasing demands from other sectors, the timing of supplies for irrigation during the agricultural seasons will be more tricky.

Higher temperature will speed up the return flow of water back to atmosphere with complications for the farmers.

Under these circumstances –and considering the fact that enough food is produced to feed the entire world population properly– it will be crucial, he said, to make sure that the food produced is beneficially used to the degree feasible and reaches the consumers, including the poor.

Between one-third and half of the food produced is lost, wasted or converted. This means a tremendous waste of resources.

“We must walk on two legs into the future, ensure that enough is produced and make sure that the produce is accessed and used in a most worthwhile manner,” he declared.

The real predicament is regional. The population continues to increase in many areas where water availability is already quite limited.

Even more challenging: the rainfall pattern is becoming more unreliable, while temperature is increasing, he noted.

There will thus be seasons and periods when a growing number of people will experience prolonged droughts (they may last over several years) while in other places, floods will have devastating consequences, he warned.