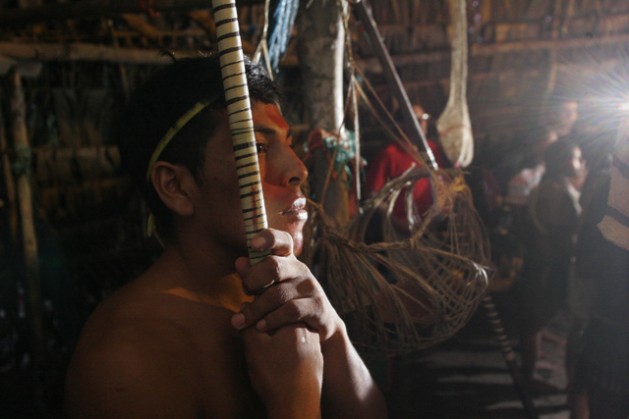 A Huaorani man holding a hunting spear in a tourist lodge in Tigüino, a community in Yasuní National Park in Ecuador's Amazon region. Credit: Eduardo Valenzuela/IPS

QUITO, Jun 5 2013 (IPS) - Reports of another massacre in an isolated indigenous community in Ecuador’s Amazon region cast doubt on the state’s compliance with precautionary measures imposed in favour of uncontacted peoples in 2006 by the Inter-American Commission on Human Rights.

According to reports that are being investigated, some 30 Taromenane Indians were killed by members of the rival Huaorani indigenous community, seven years after the Inter-American Commission (IACHR) called for protection for native peoples in voluntary isolation.

The government claims it is doing everything possible, but civil society organisations dispute that.

The Public Prosecutor’s Office is investigating the alleged Mar. 29 massacre, first heard of in early May, but the inquiry is still in its preliminary stages.

Cawetipe Yeti, the president of the Huaorani Federation of Ecuador, said 30 Taromenane Indians had been killed, including children, in revenge for an earlier incident in which an elderly couple of his ethnic group had been murdered near the Tiguacuno river in Yasuní National Park. Earlier, a member of the Huaorani who claimed to have led the attack reported a lower number of fatalities.

The Taromenane and Tagaeri indigenous communities are the last uncontacted groups in the northeastern Ecuadorean Amazon basin, having shunned contact with the outside world. They live in the “untouchable zone” of over 700,000 hectares created by the government in 1999 to protect the area from activities that could threaten biodiversity and their cultures.

Their latest clashes with members of native communities in partial contact with the outside world, like the Huaorani, have renewed doubts about the effectiveness of the protective measures and drawn criticism of government actions and the impact of the model of development in an area rich in oil, minerals and timber.

In 2006, the IACHR, part of the Organisation of American States human rights system, called on the Ecuadorean state to “adopt effective measures to protect the lives and personal integrity of the Tagaeri and Taromenane peoples.”

The resolution added that the authorities should take “the measures necessary to protect the territory inhabited by the beneficiaries from third parties.”

To comply with these requirements, one year later Ecuador launched its “Plan to protect the lives of the Tagaeri-Taromenane uncontacted peoples,” as part of a national policy for indigenous communities living in voluntary isolation.

The stated strategy of the plan is “to assure the survival and physical, cultural and territorial integrity of peoples in voluntary isolation.”

The government banned outsiders from entering the protected zones of isolated peoples for purposes other than essential actions for social and environmental protection.

Excepted from this ban are other indigenous people living in the area, like the Huaorani, who number approximately 4,000 compared to 300 Taromenane and 30 Tagaeri.

While native people’s organisations in this country of 14.6 million people claim that 40 percent of the population is indigenous, only seven percent identified themselves as such in the 2010 census.

Under the government strategy, the armed forces may enter the protected zones for national security reasons, and priority attention is to be paid to the Amazon region ecosystems inhabited by communities in voluntary isolation.

After receiving the reports of the recent massacre, the government said that in 2012 a technical team from the Interior Ministry scouted the jungle in the untouchable zone on about 200 occasions, to monitor the possible presence of uncontacted communities.

The goal of the patrols is “to establish protection plans, as well as actions to avoid contact with settlers from outside or westernised native groups,” the government explained. The team has been carrying out the policy on behalf of voluntarily isolated peoples since 2010.

The government also said visits were made to several non-isolated indigenous communities to collect information about possible sightings of any signs of the protected peoples.

But civil society organisations regard these efforts as inadequate and say that if the protection measures had been more effective, the incidents of violence might have been avoided.

For example, former legislator María Paula Romo said “To regard this as a question of conflicts between ethnic groups or clans is an unacceptable way for (the government) to disassociate itself from its responsibility for what is happening.”

In her view, in addition to the need for concrete action on this conflict, “the fundamental issue should be an honest, thorough review of the model of development in the Amazon region.”

Humberto Cholango, president of the Confederation of Indigenous Nationalities of Ecuador (CONAIE), agrees. “The conflict cannot be reduced to a confrontation between fraternal peoples,” as that would be to “wilfully adopt a political misreading of the issue,” he told IPS.

“Many have an interest in showing the world that this is ‘a problem between Indians’ rather than what it actually is: the result of an extractive industries policy that has increased the pressure on indigenous peoples. This is a national problem,” said Cholango, leader of the largest Ecuadorean indigenous organisation.

He said that imposition of the model has caused voluntarily isolated peoples to lose their way of life and their habitat, including their food and animals, which compels them to resort to violence, even among themselves, as a defence.

In contrast, Juan Sebastián Medina, the head of the Interior Ministry’s Precautionary Measures Plan, believes that the conflict “cannot be understood as a form of political pressure, nor as a form of pressure from the lumber or fossil fuel industries.

“It has to be understood from the perspective of a world view,” he said in public statements.

Ecuadorean President Rafael Correa said on May 26 that the problem is “extremely complex.” He referred to the request by the United Nations 10 days earlier for the conflict between Amazonian indigenous peoples to be brought to an end.

A group of anthropologists sent 16 recommendations to the authorities on May 29, calling for real solutions.

One of the first was for “the state to carry out an in-depth investigation to determine and achieve a comprehensive understanding of the internal factors affecting the Huaorani people, the relationship between the Huaorani and the Taromenane, and other isolated families or groups.”

The anthropologists also proposed that the state include in its analysis factors arising from the political economy of the Amazon region, such as “the extractive model of development linked to fossil fuel exploitation.”

Like CONAIE and organisations working for the rights of indigenous peoples, the anthropologists regard it as “inappropriate to reduce the conflict solely to the confrontation between the Huaorani and Taromenane peoples, while neglecting an analysis of the historical, economic and political circumstances that have exacerbated internal tensions.”

President Correa, meanwhile, said there would be an inquiry into possible omissions and violations on the part of the authorities in their responsibilities for protecting uncontacted peoples. The government is also looking into the possibility of creating a body to be directly in charge of the interests of communities remaining in voluntary isolation.