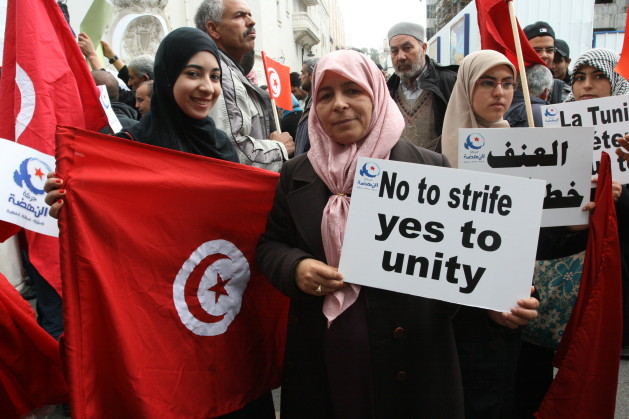 TUNIS, Jun 30 2013 (IPS) - The revolution that ousted dictator Ben Ali in January 2011 brought new, hard-won freedom to the Tunisian people. However as the country discovers whether secularism and growing political Islam can co-exist, some women are enjoying greater liberty to practise their religion while others are concerned that their rights may be eroded.

“As Arabic, Muslim women, in Tunisia, we had a lot of advantages under the rule of the last two presidents, but since the revolution we are worried about our rights,” says Sinda Garziz, 22, human rights activist. “Things can change very fast but we will not give up what we already fought for.”

Tunisian women enjoy far greater rights than many of their North African or Middle Eastern sisters, and this is the result not only of government policies which promoted women’s equality and education but of a strong women’s rights movement which has a history dating back to the 1930s.

When the Tunisian revolution began in late 2010, triggering the Arab Spring and making Tunisia the first country to overthrow its dictator, women stood alongside men at the protests. However since the moderate Islamic party Ennahda came to power in the elections of October 2011, and with the rise of radical Islamist groups in the country such as the Salafists, many feminists from the political left are concerned about the growing Islamisation of the country.

"My problem is linking politics with religion and creating a fusion between that which is spiritual and that which is political."

“My problem is not with religion and the people who practise Islam. My problem is linking politics with religion and creating a fusion between that which is spiritual and that which is political. Tunisia is predominantly Muslim but there should not be religious parties at all,” says Besma Khalfaoui, a lawyer, women’s rights activist and widow of the political leader Chokri Belaid who was assassinated in February.

These concerns also go beyond the political level and into the social sphere. “Our concern about the Islamic movement in Tunisia is that they are trying to change people’s way of thinking. They go to poorer areas of Tunis (where there is higher unemployment and less education) and talk to men in the mosque telling them how they and their wives should behave at home. This is more dangerous than politics and it will be harder to change later,” says Garziz.

As a result of these fears women activists have been closely monitoring the drafting of the new Tunisian constitution which is due to be finalised within the next couple of months. Last August they fiercely opposed one draft which suggested that women were ‘complementary’ to men; the wording was later changed to ‘equal’.

“As women, we want to ensure that the constitution protects our rights as defined in Tunisia’s Personal Statue code, that it adheres to international conventions and that it gives us our rights as individuals. We have been able to make modifications and that is reassuring but we still need to keep our eyes open,” says Radhia Jerbia, president of the National Union of Tunisian Women.

Demonstrating its flexibility and willingness to listen to the opposition has been crucial for Ennahda, which strongly denies that it is trying to take away women’s freedom. “Some people are worried about losing their rights. But Ennahda wants a constitution that guarantees liberty. We want to keep society as it is,” says Assia Nafati, 27, member of the Ennahda party and the Constitutional assembly.

Ennahda appointed Mehrezia Labidi-Maiza vice-president of the Constituent Assembly. Under the terms of the agreement for the transitional government, half of all deputies within the Assembly must be women, to ensure strong female presence and contribution.

But also, post-revolution, Muslim women in Tunisia are enjoying greater freedom to practise their religion than before. The first president to rule Tunisia after independence, Habib Bourguiba, introduced many rights for women within a new Personal Status Code, but he was very critical of the headscarf and famously called it “that odious rag”.

Ben Ali, who succeeded Bourguiba following a coup d’etat, was fearful of a strong Islamic opposition and so also restricted Muslims’ freedom to practise their religion. Women were discouraged from wearing the hijab (a headscarf covering the hair) and the niqab (a headscarf and veil which reveals only the eyes). However since Ben Ali’s departure the number of women using the niqab and the hijab has increased.

Salwa Hosni, 34, a housewife with two children, wore the niqab before and after the revolution. “Under Ben Ali’s rule I had many problems. The police would stop me when they saw me wearing the niqab and take me to the police station where I had to sign a document to say I wouldn’t wear it again. The Qur’an says that you should cover your head and I am very happy that today I can wear the niqab freely. Now I have liberty.”

Monia Mohli, 44, a housewife and mother of three, agrees. “During Ben Ali’s dictatorship I stopped wearing the hijab for three years because of the problems I experienced but when I went out without it I felt a tightness in my heart. I am so happy and comfortable that I can go out and wear it all the time now.”

However, tensions over the headscarf still exist. Manouba University, which is known to be left-wing, is currently debating whether to allow students to enter the campus and take exams wearing the niqab. Last month one of its professors was cleared of the charge of assaulting two students wearing the niqab.

The future for women in Tunisia remains uncertain as the population wait for the Constitution to be finalised and for national elections which are due to take place at the end of the year or the start of 2014. What remains clear is that whatever their political or religious views, Tunisian women have a strong voice, and are willing to fight for their rights.