UNITED NATIONS, Jun 26 2013 (IPS) - The United Nations has come under criticism from medical experts and members of civil society for what these critics consider inaccurate statements about the effects of lingering radioactivity on local populations. 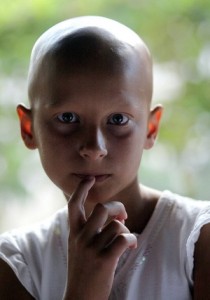 Ana Pancenko, one of the many Ukrainian children affected by the Chernobyl disaster. Credit: José Luis Baños/IPS

Scientists and doctors met with top U.N. officials last week to discuss the effects of radioactivity in Japan and Ukraine, and the U.N. has enlisted several of its agencies, including the International Atomic Energy Agency (IAEA), the World Health Organisation (WHO) and the U.N. Scientific Committee on the Effects of Atomic Radiation (UNSCEAR), to address the matter.

In May, UNSCEAR stated that radiation exposure following the 2011 Fukushima-Daichii nuclear disaster in Japan poses “no immediate health risks” and that long-term health risks are “unlikely”.

“I think it’s ridiculous,” said Helen Caldicott, an Australian doctor and dissident, in response to the UNSCEAR report.

“There have been health effects. A lot of people have experienced acute radiation illness, including bleeding noses, hair loss, nausea and diarrhoea,” she told IPS.

The UNSCEAR report followed a February WHO report, which also predicted low health risks and normal cancer rates in Japan after the Fukushima disaster, even while noting that long-term studies are still needed. WHO warned instead of resulting psychosocial damage to the population.

Asked why UNSCEAR and WHO released such statements if they were medically inaccurate, Caldicott referred to a 1959 WHO-IAEA agreement that gives the IAEA – an organisation that promotes nuclear power – oversight when researching nuclear accidents.

“The WHO is a handmaiden to the IAEA,” said Caldicott, who engaged in a 2011 debate on the subject with The Guardian’s George Monbiot. Monbiot had argued that nuclear plants are a viable alternative to coal plants.

“It’s a scandal which has not really been exposed in general literature and to the public,” said Caldicott of the WHO-IAEA agreement.

When the U.N. General Assembly proclaimed 2006-2016 the “Decade of Recovery and Sustainable Development of the Affected Regions”, it committed to a “development approach” to redress the areas affected by the 1986 Chernobyl nuclear fallout in the former Soviet Union.

The U.N.’s action plan was based on scientific studies from the 2005 Chernobyl Forum, which brought member states Belarus, Russia and Ukraine together with experts from the IAEA and seven of the world’s most influential development agencies, including the World Bank Group, WHO and UNSCEAR.

The Chernobyl Forum noted that the Chernobyl nuclear accident was a “low-dose event”. It stated, “The vast majority of people living in contaminated areas are in fact highly unlikely to experience negative health effects from radiation exposure and can safely raise families where they are today.”

Caldicott said of WHO, “They didn’t do any studies of Chernobyl, they just did estimates.” She cited a 2009 report by the New York Academy of Sciences, which painted a different picture.

For Ashish Birulee, a Ho tribal resident of Jadugoda, India, safe uranium mining in his community is far from reality, and the health effects of radiation are as clear as the photographs he has taken to document them.

Birulee, a student and photojournalist, lives next to a tailings dam, filled with radioactive waste from a uranium purification plant operated by the Uranium Corporation of India.

“We are like guinea pigs here,” he said, citing government negligence on the matter. “I’m experiencing everyday radiation exposure and also witnessing how my people are suffering.”

During the Cold War, the Soviet Union conducted 456 nuclear tests at the Semipalatinsk test site in present day Kazakhstan.

“Based on information collected during the missions and subsequent research, there is sufficient evidence to indicate that most of the area has little or no residual radioactivity directly attributed to nuclear tests in Kazakhstan,” according to the IAEA.

But the IAEA narrative differs from those who live around Semipalatinsk. According to the preparatory committee for the Comprehensive Nuclear-Test-Ban Treaty Organization (CTBTO),”A number of genetic defects and illnesses in the region, ranging from cancers to impotency to birth defects and other deformities, have been attributed to nuclear testing.”

“There is even a museum of mutations at the regional medical institute in Semey, the largest city near the old nuclear testing site,” it noted.

“What radiation does – gamma, alpha or beta – is it either kills the cell or changes the biochemistry of the DNA molecule,” Caldicott, who has worked on nuclear issues for 43 years, explained. “One day [the cell] will start to divide by mitosis in an unregulated way, producing literally trillions and trillions of [mutated] cells, and that’s a cancer,” she said.

“You don’t know you’ve been exposed to radiation,” Caldicott pointed out. “You can’t taste or see radioactive elements in the food, and when the cancer develops, of course it doesn’t denote its origin.”

Fukushima on the Hudson

Meanwhile, two nuclear plants at Indian Point Energy Centre – just 60 kilometres upriver from U.N. headquarters in New York – are fighting for new licences, making the health and radiation question more relevant to diplomats from the 193 U.N. member states who live and work in the area.

Critics have dubbed Indian Point, which sits on two fault lines, as “Fukushima on the Hudson”, in reference to the nuclear disaster in Japan that was sparked by an earthquake and a tsunami.

However, there are a few differences between Fukushima and Indian Point. “Fukushima was directly over the ocean, and the winds were favourable. They were blowing most of the radiation out to sea,” said Manna Jo Greene, environmental director for Hudson River Sloop Clearwater, noting that the remaining radiation was still disastrous.

But the winds in New York would blow plumes of radiation from north to south and from east to west. “There are 20 million people living within [100 kilometres], and there are 9 million people between Indian Point and the nearest ocean,” Greene told IPS.

“If there was a problem at Indian Point,” she added, “there’s a very good chance that the radiation could move in a southeasterly direction and expose millions of people to radiation before it blew out to sea.”