GMOs are steadily advancing in Brazil, where transgenic crop varieties produced by multinational corporations grow alongside others developed nationally. 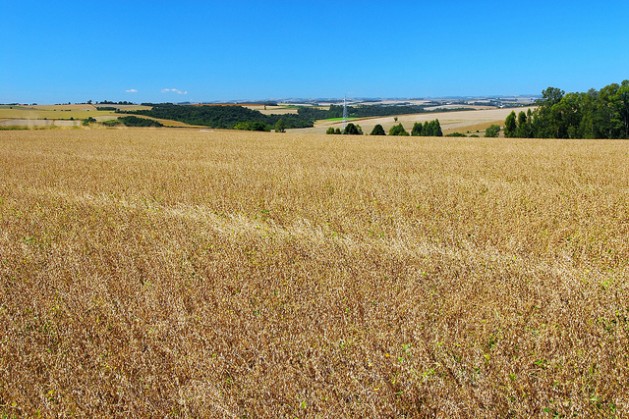 Field of soy in Não-Me-Toque, in the southern state of Rio Grande do Sul. Credit: Nilson Konrad/IPS

RIO DE JANEIRO, Jul 30 2013 (IPS) - Ten years ago, Brazil yielded to agribusiness pressure and legalised the cultivation of genetically modified (GM) soy. Today it is the world’s second leading producer of GM crops, surpassed only by the United States.

Transgenic soy had been grown clandestinely in Brazil since the second half of the 1990s.

In 2003, the adoption of Decree 4680, which stipulated the labelling of foods with a genetically modified organism (GMO) content of at least one percent, was considered a landmark decision.

But the most definitive step in this direction was taken by the administration of Luiz Inácio Lula da Silva (2003-2010) through its authorisation of GM soy through successive “provisional measures”, which temporarily allowed the legal sale of crops that were being illegally grown in the south of the country with GM seeds smuggled in from Argentina.

Finally, in 2005, the adoption of the Biosafety Law established the National Technical Commission on Biosafety (CTNBio), which is responsible for assessing and approving or rejecting applications for the cultivation and sale of GMOs.

Two years later, another law created the National Biotechnology Commission to coordinate and implement a general policy on biotechnological development.

Plant diseases, pests and invasive species are the main causes of financial losses in agriculture, especially due to the difficulty of monitoring and controlling them, according to agricultural engineer João Sebastião Araújo, from the Department of Agronomy at the Federal Rural University of Rio de Janeiro.

“In this context, in 1996 a new technology was introduced, transgenesis, with a variety of maize that contained proteins derived from the bacterium Bacillus thuringiensis (Bt),” providing the maize with the bacterium’s insecticidal properties, Araújo told Tierramérica.

“It became one of the most commonly used technologies in agriculture in the United States, and quickly came to account for the majority of maize crops grown in that country,” he added.

The emergence of this technology was followed by a new escalation in the use of fertilisers, new crop varieties, agricultural machinery and the introduction of entomotoxic (insecticidal) molecules, “all aimed at achieving bigger crop yields,” said Araújo.

This new technological package was then promoted by transnational corporations in countries like Brazil, which is viewed as “an exceptional market” due to its vast areas of soy, maize and cotton plantations, he explained.

As a result, considerable pressure was exerted by these corporations to gain government authorisation for the use of transgenics, with the promise of greater efficiency and lower costs.

According to Céleres, a consulting firm that specialises in the agribusiness sector, GM crops occupied 37.1 million hectares of land in Brazil during the 2012-2013 agricultural year, which reflects an increase of 14 percent (4.6 million hectares) over the previous year.

The leading GM crop is soy, with 24.4 million hectares planted in 2012, accounting for 88.8 percent of total soy production.

GM varieties accounted for 87.9 percent (6.9 million hectares) of the winter maize harvest. As for the summer maize crop, transgenic varieties cover 5.3 million hectares, or 64.8 percent of the total area planted.

Araújo noted that Brazil is highly competent in agricultural research and that its scientists have achieved “exceptional results” and contributed to crop yields that were unimaginable in the past.

However, despite the technological advances made, there are still insufficient answers for a number of concerns about GM crops, he said.

“Caution is needed so as not to use this technology without the necessary discretion. Today, Europe is convinced that its impacts go much further. We are talking about a very recent technique. In Brazil it dates back only 10 years, in Europe, 13 years, and in the United States, 17 years,” he added.

The tropics are the world’s most challenging region for agriculture, due to the impacts of climate change and the need to reduce the greenhouse gas emissions generated by this human activity, he said.

“We need to make use of the entire technological arsenal available to us. We believe that modern biotechnology, nanotechnology, new sciences and new paradigms are important. Brazil cannot say no to these techniques, because the current challenges are enormous,” Lopes told Tierramérica.

Lopes believes that the results of these past 10 years have been positive overall, but that it is important to make intelligent, planned and careful use of these new tools.

“We are in favour of transgenesis. We understand that there is a framework of methods and procedures for using it safely,” he noted. At the same time, however, he is critical of the fact that biotechnology remains under the control of a handful of global actors, such as agrifood corporations.

EMBRAPA is currently working on the development of new varieties of beans, tomatoes and papayas.

“We are testing a GM bean that is resistant to a terrible disease, known as bean golden mosaic virus, which is transmitted by an insect. This product has already been developed by EMBRAPA and we are now testing it,” said Lopes.

The next frontier will be vegetables. Brazilian scientists have already obtained a modified lettuce that contains large concentrations of folic acid.

“Folic acid is a key component in the diet of pregnant women, because of its importance for the nervous system development of the foetus. We are testing it and it will have to pass a long battery of tests. But it is a product which might be on our tables in the future,” he said.

While the proponents of GMOs claim that they can be a tool to combat hunger and reduce the use of herbicides, pesticides, fungicides and micro-fertilisers, environmentalists warn of the risks they pose for agricultural biodiversity.

The environmental organisation Greenpeace says the release of GMOs into the environment can lead to the loss of plants and seeds that constitute the world’s genetic heritage.

“We defend a model of agriculture that is based on agricultural biodiversity and does not use toxic products, because we understand that this is the only way we will have agriculture forever,” says a Greenpeace statement.

Moreover, the group stresses, there is no consensus in the scientific community regarding the safety of GMOs for human health and the environment.