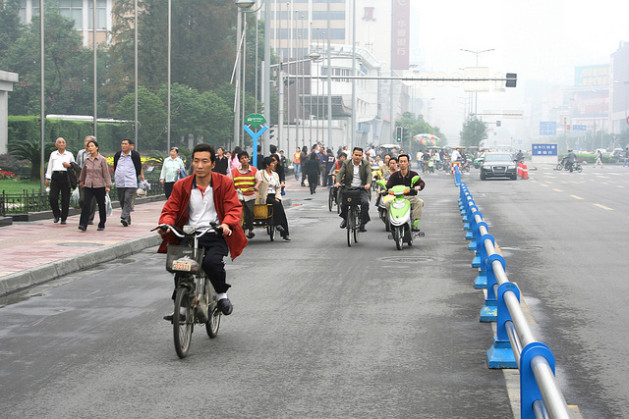 NEW YORK, Jul 24 2013 (IPS) - The China pavilion is a red, inverted pyramid in Shanghai that was built for the city’s bustling 2010 World Expo. While the pavilion pays some homage to China’s ancient past, it mostly shows off China’s 21st century ambitions, with as much swagger as the 2008 Beijing Olympics.

Once the visitor makes her way through the pavilion’s coiling lines, she is swept – by a series of escalators, and by the crowds pushing forward from behind – into visions of China’s future.

On display are children’s drawings of utopian places; a video that fictionalises one family’s intergenerational path from peasantry in the village to globalisation in the city; sustainable designs for various structures; and other grandeurs.

The Rise and Fall of Chinese Leaders

Political power waxes and wanes in China to extreme degrees. Chinese politicians in the 20th century’s revolutionary eras could quickly gain power, only to lose it shortly afterwards.

Such was the case for Chen Duxiu, the founding father of the Chinese Communist Party (CCP), as documented in Wealth and Power. By the end of Chen’s life, he found himself exiled to the mountains of Sichuan by the very same party he created.

Zhao Ziyang, once the general secretary of the CCP and the premier of the People’s Republic of China, suffered a similar fate. After Zhao was found sympathising with student dissidents at the 1989 Tiananmen Square protests, he was stripped of his posts, placed under house arrest and purged from the state’s historical records.

Deng Xiaoping was the fourth most powerful man in China in 1966, before he was denounced by the CCP for his capitalistic views and exiled to a remote area in Jiangxi in 1969. But Deng was resurrected into power in 1973, and he even took China’s helm as chairman a few years later.

This phenomenon in Chinese politics also carries over to the 21st century, as seen by “princeling” Bo Xilai’s downfall.

Bo was set to gain a prominent role in the national CCP government during the 2012-13 leadership changes. But Bo’s rise in power ended abruptly, when Chonqging vice-mayor Wang Lijun, who worked under Bo, escaped to the U.S. consulate in Chengdu and charged Bo with corruption and for his alleged role in the murder of British businessman Neil Heywood.

“There certainly is a long historical tradition of disgraced officials, some of whom come back. But when something goes wrong, someone has to be blamed,” he said.

Earlier this month, China unveiled the world’s largest building, the New Century Global Centre, in its southwest city Chengdu. The 1.7 million square metres of floor space include a 14-screen IMAX theatre, a replica Mediterranean village, a water park and an artificial sun.

China – now the world’s second largest economy – has also claimed other superlatives, by planning construction in Hunan on what is slated to be the world’s tallest skyscraper, and by completing in Zhejiang the world’s longest cable-stayed bridge.

In politics, China has stood its ground, even challenging the world’s most powerful nation, the United States, on different fronts. In April, after the U.S. State Department released its annual human rights report that in part targeted China, the Chinese State Council fired back with a report of its own, picking apart the U.S.’s human rights failures.

And when U.S. President Barack Obama hosted Chinese President Xi Jinping in California for an informal, bilateral summit, it was observed as a meeting of equals.

For decades, China failed to adopt the appropriate military technologies to defend against imperialists, the economic frameworks to develop and the governmental systems to maintain order. So how did China come to this moment of economic and political success? And what underlying philosophies had driven China forward to this point?

Parts of China’s history were distorted by the state-owned media, or simply purged during the Cultural Revolution, or at least suppressed by the state from collective memory.

In their new book, Wealth and Power: China’s Long March to the Twenty-First Century, authors Orville Schell and John Delury weave together the history of modern China through the perspectives of China’s most influential leaders.

Schell and Delury’s historical investigation covers 180 years in scope and begins in Nanjing, in the Temple of the Tranquil Seas. “It was in a back room of this temple that, in the oppressive heat of August 1842, Chinese negotiators were forced to sit with their British counterparts and hammer out the crushing terms of the Treaty of Nanjing,” they wrote.

The treaty marked the end of the three-year Opium War, China’s first major conflict with the West. It also marked the first of many unequal treaties that China would suffer through under its imperial oppressors – the U.K., Germany, Russia, France, the U.S. and Japan.

Self-dubbed the “Middle Kingdom”, 19th-century China and its then ruling Qing Dynasty emperors were reluctant to learn from the advancing West – which the highbrowed Chinese still referred to as “barbarians”.

But after a few additional rounds of military defeats and humiliations suffered at the hands of the West and Japan, as well as increasing rates of domestic unrest, Chinese leaders acknowledged their country’s own weaknesses and worked painfully to reform them.

The book details the careers of 11 of China’s subsequent leaders. It weaves through their personal and political lives, and analyses the ideas that propelled them forward. What strings the characters together is the leitmotif “wealth and power” – a concept that morphs and accretes as the historical narrative progresses.

Schell and Delury met in New Haven, Connecticut, over dinner at the home of historian Jonathan Spence, a professor at Yale University. Delury had just finished his PhD programme under Spence and was looking for a job, and Schell – the director of the Center on U.S.-China Relations at the Asia Society – had a contract with the publishing group Random House.

Schell first hired Delury on as an associate director at the Center on U.S.-China Relations. Delury is now an assistant professor at the Graduate School of International Studies at Yonsei University in South Korea. Eventually, the two decided to undertake the enigmatic task of piecing together modern China.

“History always makes sense. We thought it was our job to try to understand how it did in this case,” Schell told IPS. “Each of us brought different parts of the historical puzzle into the project.”

In pursuit of achieving “wealth and power” and restoring the country, China – now a single-party communist state – dabbled in a variety of ideologies, including “republicanism, anarchism, Marxism, Christianity and even fascism – whatever ism of the time seemed to offer the best restorative promise,” wrote the authors.

One of the most fascinating portraits in the book is that of Chairman Mao Zedong, who led China through a series of violent and oppressive revolutions, most famously the Cultural Revolution (1966-76).

“Like an addict in search of the next high, (Mao) was always looking to the next campaign or movement, each more relentless, brutal and exhilarating than the last,” wrote Schell and Delury.

But through the cold lens of history, Mao’s acts may have finally cleared the burdens of China’s ancient traditions and allowed for the pragmatically minded Deng Xiaoping to reform and open up China’s economy, they wrote.

The emphasis on “wealth and power” in statecraft differs, however, from the more Western ideals of achieving democracy and individual liberties.

Even Sun Yat-Sen, the Western-educated founding father of the Republic of China, doubted democracy’s success in his newly minted country.

“Like so many other Chinese reformers and even revolutionaries, when push came to shove, Sun came down on the side of order, not the rights of the people. China’s basic challenge was not to be met by ‘merely copying the West,’ but by ensuring the overall liberty and independence of the country collectively,” wrote Schell and Delury.

The last profile in the book focuses on dissident Liu Xiaobo. Liu, a professor and writer, was an active participant of the 1989 Tiananmen protests. He gained international fame after he won the Nobel Peace Prize in 2010, the first Chinese citizen to do so. But Liu was unable to receive the award since he was locked up in a Chinese prison cell.

Asked why the authors included Liu, who values individual rights and strays away from the “wealth and power” narrative, Schell said, “Now, having obtained a fair modicum of wealth and power, maybe (China’s) agenda of becoming a more just, rule of law [society], perhaps even a constitutional society becomes possible.”