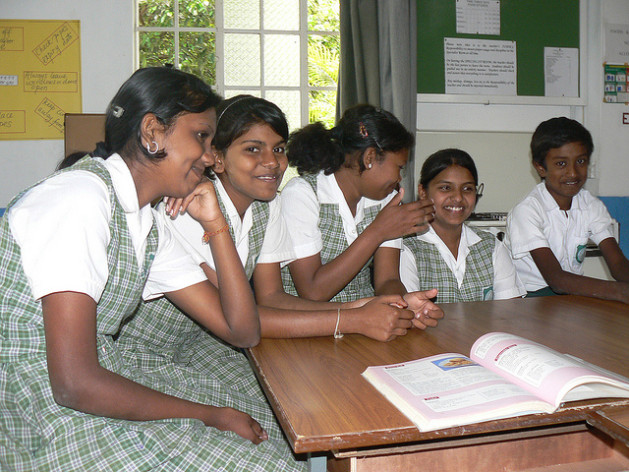 PORT LOUIS, Jul 29 2013 (IPS) - Tourism, agriculture, fishing, the water supply – climate change threatens the very foundations of society and the economy in Mauritius. As the Indian Ocean island nation develops its adaptation strategies, it is working to ground the next generation of citizens firmly in principles of sustainable development.

Launched on Jul. 5, the country’s National Climate Change Adaptation Policy Framework (NCCAPF) included familiar but worrying predictions for the future. Half of this tourist destination’s beaches could disappear by 2050, swallowed by rising seas and increasingly violent and frequent storms. Fresh water resources could shrink by as much as 13 percent while demand will rise steadily.

“We are shocked to learn that our beautiful island – or part of it – may disappear because of a rise in sea levels,” student Felicia Beniff told IPS as she emerged from a class on the environment and climate change with four friends. “We are afraid. We have many more years to live. Where will we go?”

The teenage students at MEDCO Cassis Secondary School in the Mauritian capital Port Louis are among a quarter of a million students across the island that will be exposed to principles of sustainable development.

Mauritius is working hard to correct unsustainable practices, notably through the Maurice Île Durable. Educating youth about sustainable development is part of this long-term vision to establish a new, ecologically sound economy.

“We collect plastic bottles. We turn off the lights and the air-conditioners when we leave the classroom. We open the windows to aerate the classes. This reduces the school’s expenses. We also plant trees,” one of the students, Ashootosh Jogarah, told IPS.

His friend, Varounen Samy, told IPS that they have “now changed our attitude towards the environment.”

Mahen Gangapersad, the school’s rector, believes Mauritians have taken the environment for granted for too long without realising the harm they cause to natural resources. The new education programme aims to correct this.  “Better late than never,” he told IPS.

Tree planting, the installation of photovoltaic cells for renewable energy, endemic gardens, backyard gardening, waste segregation, compost-making, rain water harvesting and water control are now a reality at many schools. The plan is to expose the entire student population.

“So we are reaching out to 250,000 plus people,” Veenace Koonjal, special adviser to the Minister of Education told IPS. He believes this training will have a great impact on awareness among the country’s population of 1.2 million as students take what they learn home to their families and communities.

“Climate change is weakening the economic, social and environmental pillars of the island,” said the Mauritian Minister of Environment and Sustainable Development Deva Virahsawmy, at the launch of the NCCAPF.

The launch of the newly-completed policy framework was accompanied by the opening of a Climate Change Information Centre in Port Louis, an initiative that will gather local and regional information on climate change and make it available to everyone – scientists, engineers, architects, as well as farmers and students.

Strengthening and broadening knowledge, awareness and information about climate change is a key part of this island nation’s response to global warming. Mauritius, like other island states, can expect to bear the full brunt of climate change despite contributing very little to the greenhouse gas emissions that cause it. 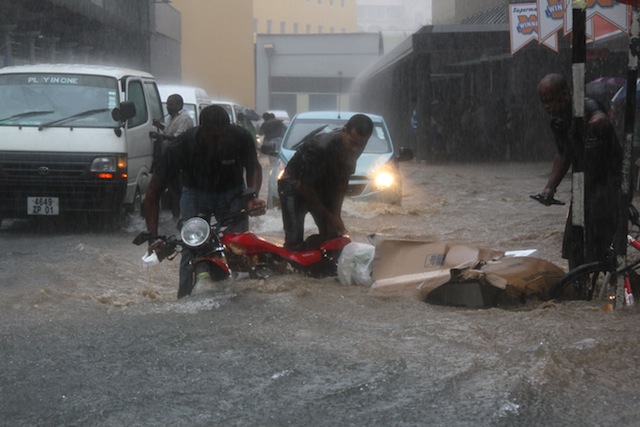 Further, the policy framework acknowledges that the island’s geography and topography limit what can be done to counter harmful impacts of global warming on fishing and the coastline, tourism, or agriculture.

Khalil Elahee, chairperson of the government’s Energy Efficiency Management Office, believes the population has begun to realise the very serious impact that climate change is already having.

“People want sustainable development. So it is essential we start a new way of living and developing our island, climate change or not,” he told IPS.

“Whatever we do may not be enough but the measures taken by Mauritius in its climate change education programme help to mitigate the impact of climate change on the island,” Elahee said.

Virahsawmy said that climate change education would enable Mauritius to strengthen its resilience in key sectors of its economy and mitigate the risks and prevent losses of lives and property.

Mauritius has already received three million dollars from the Africa Adaptation Programme – funded by the Government of Japan’s Cool Earth Partnership for Africa – to integrate and mainstream climate change adaptation into its institutional frameworks and core development policies.

An official from the Ministry of Environment and Sustainable Development told IPS that a Technology Needs Assessment (TNA) project is also being implemented this year. It will receive technical support from the United Nations Environment Programme’s Division of Technology, Industry and Economics, and its Risoe Centre in Denmark. It is funded by the Global Environment Fund (GEF) to the tune of 120,000 dollars.

The key aim of the TNA is to bridge the gap between identifying appropriate technologies and the design of action plans. The aim is to allow Mauritius to implement technologies to reduce greenhouse gas emissions and support adaptation to climate change that is consistent with national development priorities.

The government hopes to secure more funding for adaptation and mitigation efforts from the Green Climate Fund, the U.N. Adaptation Fund and the GEF.

Beyond the classroom, several other programmes run by NGOs complement what young people are learning at school. The Youth be Aware programme of the Mauritius Red Cross, for example, engages 600 young people on the risks posed by climate change to the island.